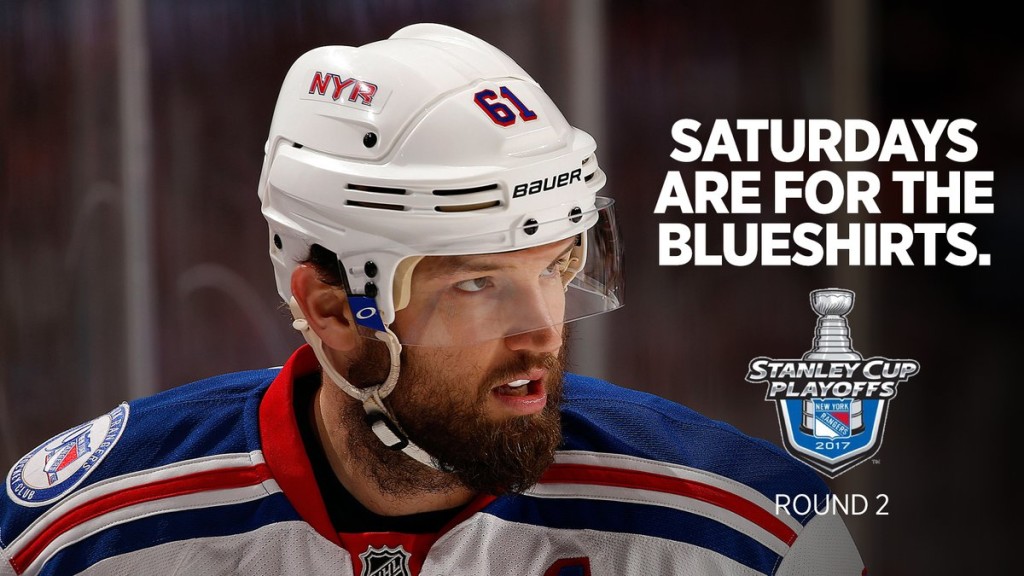 Saturdays are for the Blueshirts!

At least they better be. Coming back to New York needing to win 4 of 5 isn’t an ideal position for a squad that was the heaviest second round favorite before the series started. I saw nothing from Ottawa that has me worried about today’s tilt – it’s the Rangers themselves that have me a little concerned. Particularly the forwards. Our supposed strong suit of skill & depth seemed relatively unfazed by the Sens so-called “trap”. They navigated through the neutral zone pretty easily & generated more scoring chances than all but 2 games vs the Habs with nothing to show for it. They simply gotta finish.

That’s easier said than done. Craig Anderson had a very good night in the opener, but the Blueshirts allowed him to keep it pretty simple without a ton of traffic in close. We’ll need a return of first round Rick driving to the crease & it’d be nice to see Kreider do the same. Of all the Rangers forwards struggling (Step, Hayes, etc.) Kreids has me scratching my head the most. Something’s gotta be wrong with him. Seems to be playing way too tentative when the playoffs are usually when his speed & strength shine. We’re still waiting.

This is the Ottawa Senators though. The Rangers don’t need EVERYONE. They just need a couple of SOMEONE’s to take better advantage of their high-quality chances & power play opportunities. Might also be a good idea to avoid bonehead penalties as, similar to their 6 games against Boston, the Sens thrived Thursday night while up a man. It took a heroic effort out of Lundqvist to keep them 1 for 4 but they were much more tame when playing at even strength. That’s where NY really need to separate themselves this afternoon.

I’m confident the Blueshirts are the better team by a decent margin – but so were the Blackhawks & they’re making tee times. If they wanna skate another C+ effort this afternoon & allow Ottawa to hang around for another behind-the-goal-line miracle then they deserve the hole they dig. AV’s squad showed resiliency to get to this point though & I expect to see it again today. The guys up front have to gel at some point & the Rangers are due for an easy one. No better time than now to bring momentum home with a big W.