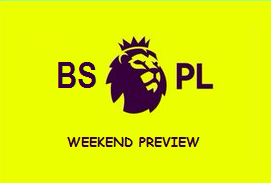 Big weekend, boys and girls. It’s officially put up or shut up time in the European leagues, particularly the ones outside of Germany and Italy where multiple teams actually start the season with a shot at the title. (Shouts to Monaco for removing Ligue 1 from that distinguished list – this year anyway.) There’s a two-horse race in Spain that, if the recent Clásico is any indication, could come down to the final kick on the last matchday. Plus there are tussles at the top and bottom of the table in EPL, with damn near every single game on the schedule this weekend having important implications for something – not least of which being the North London Derby, where Spurs can mathematically eliminate the possibility of a St Totteringham’s Day for the first time in many if not most of your lifetimes. 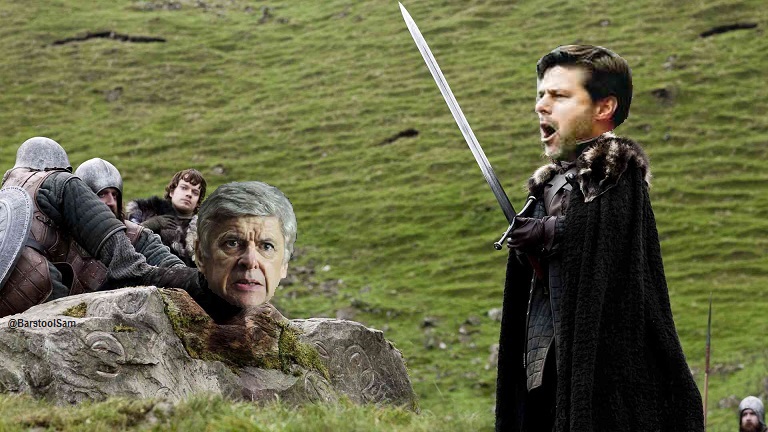 As a quick [random] aside, this is usually about the time of year when I start to get a lot of complaints on twitter dot com about the EPL not having an end-of-season playoffs to decide the champion (a la MLS… as well as every other American sports league). What the people who complain don’t seem to understand though is that playoffs simply cheapen weekends like this one by making the regular reason games less important… not to mention EPL already has the best of both worlds with a win-or-go-home competition in the form of FA Cup (and the make-pretend one but we don’t speak of that).

Phew, feels good to get that off my chest.

Anyway, point being, games on deck finna be tons of fun.

Reminder of the results from the abbreviated slates played last weekend and this midweek: 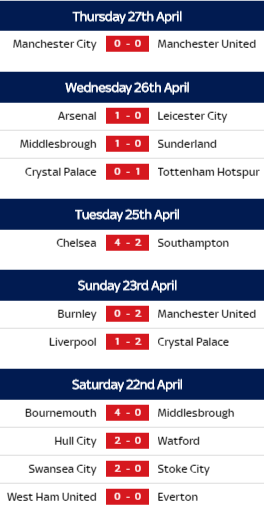 – Chelsea just keeps on chugging along.

– Tottenham at Palace is a game that Spurs settle for a draw in 100 times out of 100 every season prior to this one. Important word of advice though:

– The Manchester Dærby was a disgusting display of soccer and should be a reminder to everybody that you should never ever ever EVER underestimate Dear Leader Jozay’s ability to suck every last ounce of fun out of a game if a scoreless draw suits his needs.

– City and United sharing the points may have seemed like an ideal result for the likes of Liverpool and Arsenal… but upon further review I don’t think that is the case. City has a very easy last few games and, in my mind anyway, already has a spot in the top 4 wrapped up. That leaves one spot open for United, Liverpool and maaaaaaaaaaaaybe but probably not but perhaps but definitely almost for sure not Arsenal. Thus, in retrospect I think a City win would have behooved the other two. Either way, shaping up to be an interesting final few weeks.

– Youge win for Bournemouth has all but whittled the relegation battle down to Hull City and Fat Cat’s Swans. May the best bad team win.

As it stands, with most clubs having four or five games remaining (Arsenal has six), this is how the table stands: 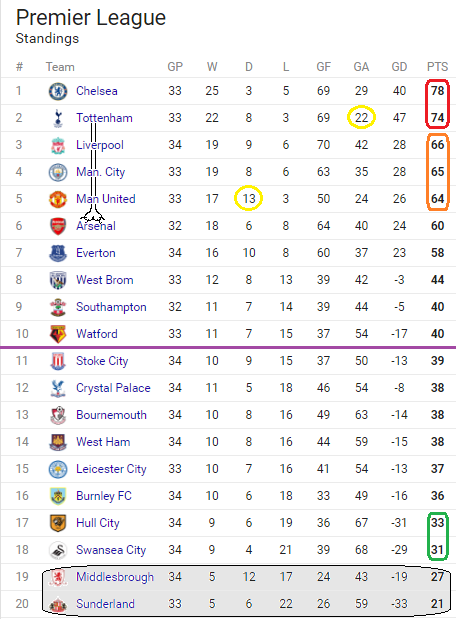 And finally this weekend’s schedule: 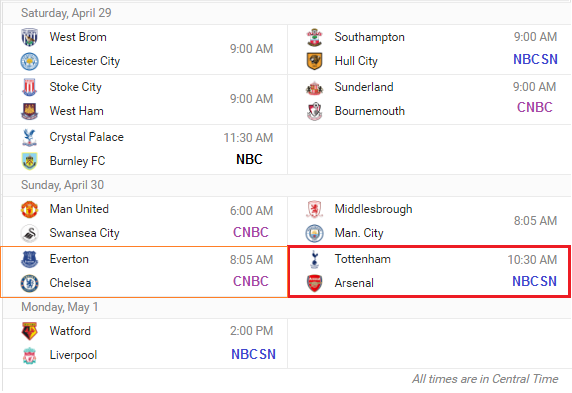 What’s at stake: Spurs are 14 – FOURTEEN – points ahead, meaning a win this weekend would put them 17 – SEVENTEEN – points in front. I’m not good at math but since Arsenal will only have five games left, I’m gonna go out on a limb and say that that would officially end the Gooners chance of finishing above their hated rival for the 15,000,000th season in a row.

Why Arsenal might win: Because its crunch time. And because it’s Spurs.

Why Spurs might win: Because they are really good. And because Arsenal kind of suck.

Mauricio Pochettino has done magical things this season but you can’t help feeling as though he’s started to overthink things lately, starting Heung-min Son at left back against Chelsea and then going with an awkward 3-back system against Palace for the first 45 minutes. The fact is that outside of Lexi and perhaps Ozil, Spurs are arguably better at every single position on the field. They are playing at home. Especially with Shkodran Mustafi and Laurent Koscielny in doubt because of injuries, it would take a spectacularly spursy performance to screw this up.

Now obviously whenever you think there is absolutely positively no way Spurs could lay an egg, there is always a good chance that that is when they drop said egg right on your face. Been there done that. But here’s the thing: there is just as much – if not more – of a chance that Arsenal, already about as emotionally stable as the cast of Pretty Little Liars, gives up an early goal and immediately transforms into a gang of surrender-monkeys, surrendering their fully engorged bottoms for Dele Alli and Harry Kane to fornicate with repeatedly 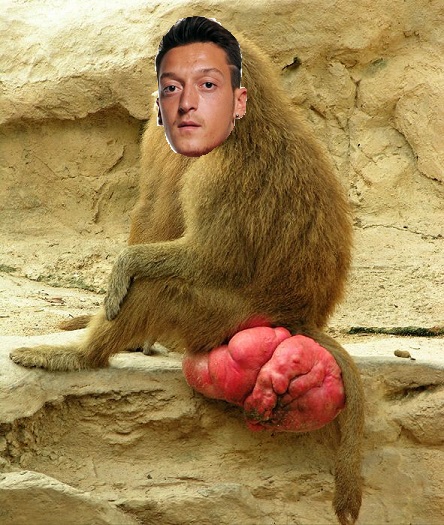 Given the controversy already surrounding Arsenal, getting embarrassed by your arch-nemesis (and long-time doormat) would be the soccer equivalent of locking the doors to the church and murdering Arsene Wenger’s entire family one by one… along with his hopes and dreams and prospects for remaining at the club next season.

That outcome is not nearly as far outside the realm of plausibility as one might think… but I’ll give Arsenal the benefit of the doubt on this one and say they come up with one of their better performance of the season (aka, avoid a blowout): Spurs win 3-1. 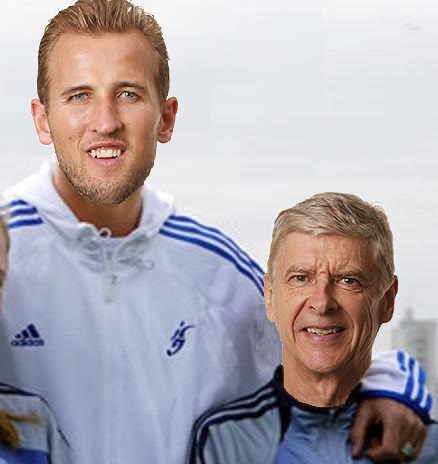 Welp, here it is. Easily the toughest game Chelsea – currently four points up on Spurs with five games to play – have left on the schedule. If the Blues pull this one out it’ll be just about curtains for the title race. Everton doesn’t have a ton to play for as they are essentially locked into a Europa League slot (with West Brom 14 points behind in 8th) but too far back to have any real shot at Champions League.

Everton are fresh off an inexplicably crap effort against West Ham that somehow someway finished nil-nil, and have won only two of their last five games. Chelsea was won two in a row since their shock loss to United.

Everton has had a full week of rest while Chelsea played midweek. Then again, the Blues have been amazingly good at avoiding injuries all season, and a relatively light fixture list has given Antonio Conte the flexibility to do some rotating here and there.

Fact is Chelsea has the look of a champion and it’ll take something special from Everton to trip them up. Then again, Romelu Lukaku may be extra inspired wanting to look good for his future employer… gimme a 2-2 draw. 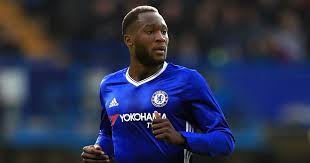 • Yet another game with bigly implications is Crystal Palace [-130] hosting Burnley [+350], with Palace essentially safe while wee Burnley having quietly SUCKED for the last couple months bad enough to be on the verge of being in real danger to be caught by Hull and/or Swansea. Unfortunately for the wee ones their road form is awwwwwful and the Iggles – having just barely lost to Spurs – is just too good under Big Fat Sam. Palace to win 2-0.

• Sunderland [+190] is in zombie mode while Bournemouth [+135] just punched their ticket to safety last week, meaning it’s hard to see where the motivation will come from on either side. The Black Cats haven’t won since early February but maybe this is their “broken clock” moment… Sunderland to win 1-0.

• Hull City [+450] is still desperate for points, which probably makes them a great value in a game that Southampton [-165] may just go through the motions. Can’t help thinking though that the Saints, which actually looked relatively competent while losing to Chelsea on Tuesday, have yet to pack it in for the season. Southampton to win 3-1.

• Middlesbrough [+900] needs to take a season in the Championship and think about what they have done this year. Defensively they’ve played well enough to stay up. Offensively they have been a joke. Band combo against a team with weapons like Aguero, Gabby Jesus, Sane, De Bruyne, et al, where one mistake at the back is likely all it will take. City to win 2-0.

• Swansea [+800] has to PRAY that Hull does get tripped up by Southampton because the Swans have a date at Old Trafford against a United [-280] squad that hasn’t lost an EPL game since last fall. Think about that for a second. They haven’t lost since October and still may not make the Champions League. Gotta be one of Jozay’s top three career achievements. Unfortunately for Fat Cat’s Swans, Dear Leader didn’t let more than two players push forward into City’s half the entire game so United should be well-rested for this one. Assuming Jozay takes the training wheels off this weekend… United to win 2-1. 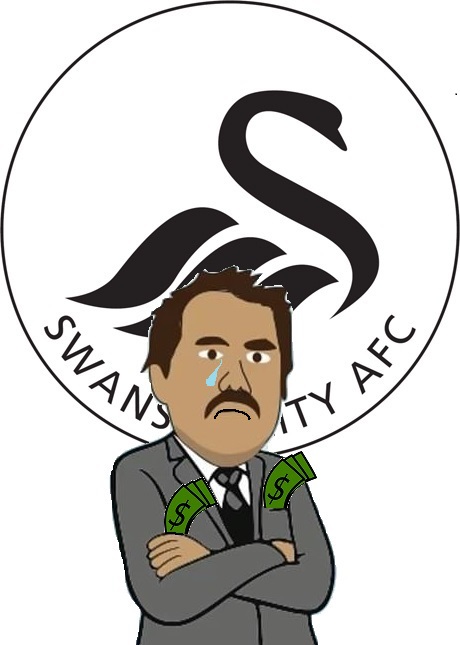 • Watford [+500] crossed the 40-point threshold and appears to have immediately called it a season. Liverpool [-190], as banged up as they are, should be the beneficiaries. Liverpool to win 3-2.

• And finally some quick hitters to increase the chances I end up getting one right: West Brom [+150] versus Lester [+185] and Stoke [+105] versus West Ham [+270] are like mirror imagines involving clubs with nothing to play for hosting clubs that are likely one win away from ensuring another season in the big leagues. LOCK OF THE WEEKEND: one of the more highly motivated underdogs will absolutely win, which given the odds means you’ll either be rich (if one wins) or very rich (if they both do). So to make it official: Lester and West Ham to win. 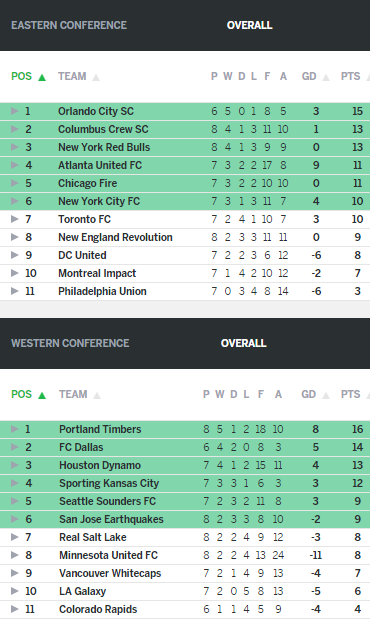 – Dax McCarthy returns to his former home to play NYRB for the first time since his shock trade to Chicago in the offseason. Lots of midfield talent will be on display with Dax and Schweinsteiger on one side and Kjliestan and Felipe on the other.

– LA Galaxy may be forced to overpay for someone – Chicarita Hernandez, anyone? – and quick if they don’t show some signs of life soon. Eight goals in seven games resulting in six points just aint gonna get the job done out in Lala Land. Then again, the picture may look brighter after this weekend’s game against the league’s resident whipping boy in Philadelphia, which hasn’t won a game in roughly a decade.

– Best game of the weekend: Dallas hosting Portland could very easily be an early preview of the Western Conference final. 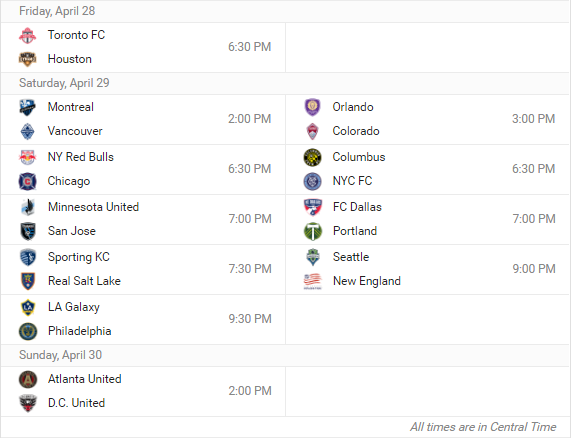 Spain: Barcelona and Real Madrid are even on points but the latter has a game, meaning every game is must-win for the Catalans while Los Blancos have jusssst a tiny bit of breathing room coming down the stretch. All games involving either are can’t-miss at this point. Real host Valenthia on Saturday (9:15am CT on beIN) followed by Barça visiting Espanyol (1:45pm CT on beIN).

Italy: Bigggggggggggg weekend in Serie A with rivals Roma and Lazio facing off early as balls on Sunday (5:30am CT on beIN) followed by Juventus hosting Napoli – but, alas, the latter is only available on tape-delay (6pm CT on beIN).

Germany: BVBabyjesus hosts Cologne on Saturday (8:30am CT on FS2)

So there you have it. Champions League is back in action next week. Get pumped.