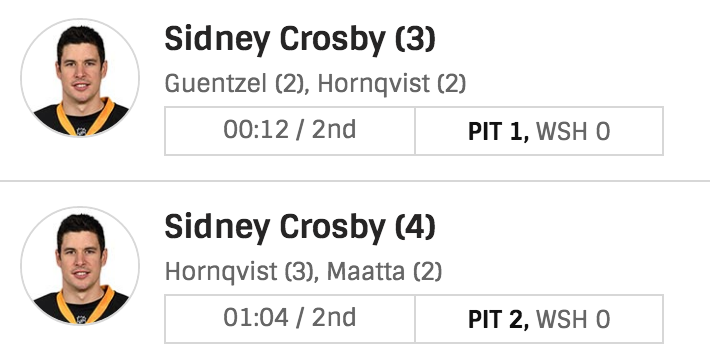 After a slow, feeling out process of a first period, Crosby put two quickly in the back of the net to start off the 2nd period, and man did that suck. One bad minute of hockey, especially in the playoffs, is less than optimal, folks. The Caps did tie the game up with goals from Ovi and Kuzy, but it wasn’t enough, as Nick Bonino Bonino Bonino scored on a breakaway because Brooks Orpik is too slow and gave the Pens the GWG.

The Caps outplayed the Pens all around. The Caps outshot them 35-21, outhit them 41-17, and I don’t know the possession numbers but I have to assume they were very tilted towards the Caps. Just goes to show 1 bad minute can make a world of difference.

Also, this call in the 3rd period was a bunch of bullshit and I am writing the NHL a letter about it

The Caps didn’t get a PP all game, but they whistled Nisky for that? Sad times.

Even if I didn’t care about the Caps, hockey, or sports, if I watched this game, I would have no choice but to believe the Caps are the better hockey team. Hopefully that reflects on the scoreboard during game 2 on Saturday.