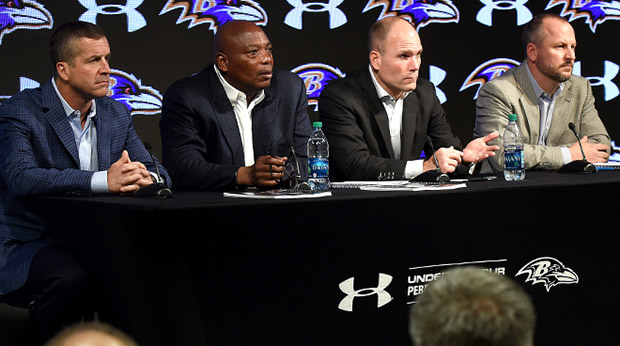 Ahhh yes, the NFL draft. The most important day of the offseason. That goes double for the Baltimore Ravens. This is where Ozzie Newsome makes his money. His entire reputation is based on his brilliant track record in the draft. That goes for all rounds, but obviously the first round is where reputations are built, and his list is pretty damn good. You know the names. Ogden and Lewis in the same round in ’96. Reed in ’02. Sizzle in ’03. Flacco in ’08.

But what you’ll notice is none of these marquee names have come in recent years. Since the Super Bowl win in 2012, things haven’t gone so hot. CJ Mosley and Ronnie Stanley look like great picks, but Matt Elam is already out the door and Breshad Perriman is looking like bust city so far. Some of the shine has been removed from Ozzie’s name. After consecutive years missing the playoffs, there are starting to be whispers if there’s one more whiff on making the postseason, Harbaugh and Ozzie might be in trouble. Which is maniacal in my opinion given their accomplishments, but it is what it is. So this is a pivotal draft for those guys.

Who might they take? Who the hell knows. The draft is already wildly unpredictable, and many “experts” are describing this year’s draft as the hardest to project in memory. But there seems to be a consensus that there’s 12-13 guys who are on an upper tier, and then there’s a drop-off. With the Ravens sitting on the 16th pick, that could mean a variety of things. Do they value a guy enough to warrant jumping a few picks to get into that tier? Do they see the next tier of guys as relatively interchangeable and choose to fall back and stockpile more picks? Let’s just assume that they stand pat at #16 and use the pick.

Who might they take? While every team likes to claim that they draft “best player available”, few in my opinion stick to it like the Ravens. Great example was CJ Mosley a few years back. Daryl Smith was a solid ILB at the time and the Ravens really needed talent at WR and CB among other positions (as is tradition). But when a stud like Mosley comes along, you don’t pass that up. So if a stud comes along that isn’t one of these guys, don’t be surprised. But these are the guys I’ve seen linked to the Ravens over the past few weeks:

This is the guy that we cross our fingers and hope falls to us, but probably isn’t realistic. 16 is probably the very lowest he could fall. He’s the kind of versatile linebacker that Baltimore loves to use in their 3-4 scheme. Most important of all, he can get after the quarterback. There’s no weakness in his game, and he excels in 3rd down situations. He’s fundamentally sound, and his 4.52 40 allows him to cover anyone if necessary. He might not be the pure pass-rusher that the Ravens are looking for, but all those extra things he brings to the table make him a phenomenal football player. If he’s on the board at 16, you take him. No questions asked.

I’m lumping these two guys together because I’d honestly be happy with either of them in purple and black. Reports are that the Ravens are extremely high on Davis. Usually I’d say that’s a good thing, roll with Davis and don’t look back. But this organization’s struggles drafting wide receivers is well documented. Travis Taylor, Mark Clayton, Breshad Perriman, need I say more? Anyway.

It would be hard to argue with them taking Davis at 16. Considering he’s the NCAA’s all-time receiving yards leader, I’d say he was incredibly productive at Western Michigan. Better yet, he elevated his game against all the power 5 schools his team went up against. He’s all the things that those 3 busts I just mentioned aren’t. He’s polished. He runs great routes, he’s got good hands, he competes in the middle of the field, and he gets in the end zone. He’s the full package at 6’3″. You can’t go wrong with Corey Davis.

On the other hand, we all know Mike Williams. He put on a goddamn show not just in the National Championship, but all season. He goes up and gets the football, which is exactly the kind of guy Joe Flacco needs. We haven’t had a guy who can win a jump ball since Anquan Boldin left. He’s not a scorcher, but he’s got incredible ball skills and his “catch radius” is off the charts. I seriously would be happy with either of these guys.

These are the main 3 guys that I keep seeing linked to the Ravens. Some other names include Reuben Foster and Cam Robinson and even OJ Howard from Alabama. Gotta love that Ozzie/Alabama connection but I just don’t see it playing out that way. Foster has too many red flags, Robinson is a reach, and OJ Howard won’t fall that far (plus we don’t need ANOTHER tight end). I really think that if it’s none of these guys, Ozzie trades back. But we’ll see. Your guess is as good as mine. That’s what makes the NFL draft a beautiful thing. In Ozzie We Trust.