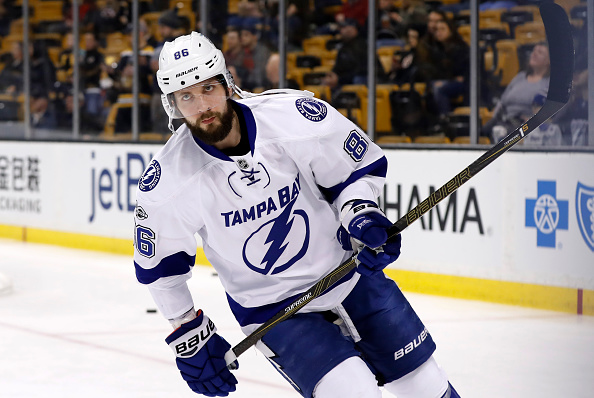 I can’t imagine that anybody outside of actual, legitimate hockey fans have any idea who Nikita Kucherov is. He’s not a household name but he quietly had an MVP-caliber season this year. He was 2nd in goals to Sidney Crosby with 40, and he was top 5 in the NHL with 85 points. For a guy who is “only” making $4.75 million a year, that’s a STEAL for the Tampa Bay Lightning. When you look at players who are making similar money to him, you have Paul Martin, Scott Hartnell, Carl Soderberg, Bryan Little, Chris Kreider. All good players but I would never put any of them in the same sentence as Crosby. So yeah, Nikita Kucherov had a career year at the age of 23 and the Tampa Bay Lightning let him down. So when he went back to Mother Russia after the season ended, he had a few choice words for some of his teammates.

Huuuuuuuge offseason so far for guys airing out their teammates to the media. First we had Jack Eichel ripping some of his guys for feeling content with just being in the league and not necessarily caring about a winning culture. Now Kucherov drops the “they’ve got their money and stopped working” quote on the Bolts. That right there seems to me like a turning point where the Lightning become less of Steven Stamkos’ team and more of Kucherov’s. Not sure who exactly he’s directing that quote towards but the guys who got a new contract this year were himself, Stamkos who suffered another long-term injury for the however many-th time in his career, Hedman, Vasilevskiy, Killorn and Namestnikov. Through the process of elimination and taking a look at their point production this year, I’m assuming most of this was directed toward Killorn and Namestnikov. They had 36 and 28 points respectively.

And shoutout to Kucherov from not backing down from those comments either when given the chance.

He could have said things were taken out of context. He could have said that the translation from Russian to English didn’t quite match up. But instead he just said they were made out of frustration and that’s as real as it gets. Kucherov is pissed off. The Tampa Bay Lightning have as much talent as anybody else in the league. Between a healthy Stamkos, himself and Jonathan Drouin, they have all the offense they need. Victor Hedman will win at least one Norris Trophy before he retires and that is setting the bar for him extremely low. They could use some help in the net but Vasilevskiy has shown that he can be a starter in this league. Sure, injuries have been fucking them over but there’s still no reason why they should be home right now instead of in the playoffs. Aside from the fact that some guys in that locker room just aren’t playing hard dick hockey like the others. Kucherov is pissed off about it and not afraid to let those guys know. Need more of that.

But seriously. If this happens again next year, I’m fully expecting him to actually murder somebody before he leaves for the KHL.