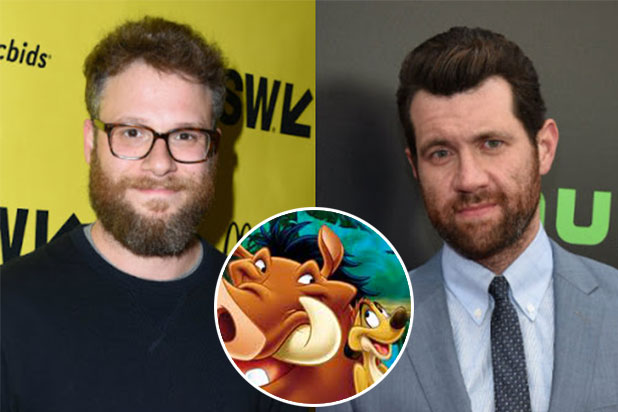 The Wrap- Hakuna matata, Seth Rogen and Billy Eichner: The comedy stars are both in final negotiations to join Jon Favreau’s live-action take on “The Lion King,” two individuals familiar with the project told TheWrap. Rogen will voice the role of warthog Pumbaa, and Eichner will tackle meerkat Timon. The characters are responsible for one of the most memorable songs in the original animated film — an upbeat number centered on the Swahili phrase “hakuna matata,” which translates to “no worries.” The roles were originated by Nathan Lane

It is liberating to know that I will be able to die in peace after the new Lion King hits theaters.

First off, the greatest animated movie ever made is coming to the silver screen with a live action version. I already know there will be something special about seeing classic characters like Simba, Rafiki, Nala, and Mufasa depicted as real life inhabitants of Pride Rock as opposed to animation like it’s 1923. If Jungle Book and Beauty & The Beast was any indication, this new crop of Disney live action flicks will be the best example of CGI we’ve ever laid eyes on.

Not to mention Disney is going to be working with the Shaquille O’Neal of our generation’s directors. He’s not GOAT status like Scorsese or Cameron, but Jon Favreau still has a nice set of accolades while being an all-time lovable dude. He’s in the same class with Hank Azaria and Jeff Goldblum as guys that have had random great cameos in Friends while sporting extremely low-key amazing careers. From Swingers, to the doctor in Elf, to directing films like Iron Man, it’s hard to top a career quite like Favreau’s. Now the cherry on top of his resumé will be directing a modern-day telling of MacBeth featuring a bunch of CGI Lions and Hyenas.

Which brings us to the news that Timon & Pumbaa will be voiced by Seth Rogen & Billy Eichner. Thank goodness Disney put in work finding the voices for one of the greatest pairs of friends in history. Starsky & Hutch, Trump & Putin, Jerry & George, Timon & Pumbaa. I’m not sure if my own mind could have thought up a better pair of voices. It’s simply a stone cold comedic lock. Nathan Lane damn well may have to retire from Hollywood after Seth Rogen Wally Pips his ass.

My only concern here is that this doesn’t get Billy Eichner too big for Billy on the Street, which you can fall down a YouTube hole for hours watching.