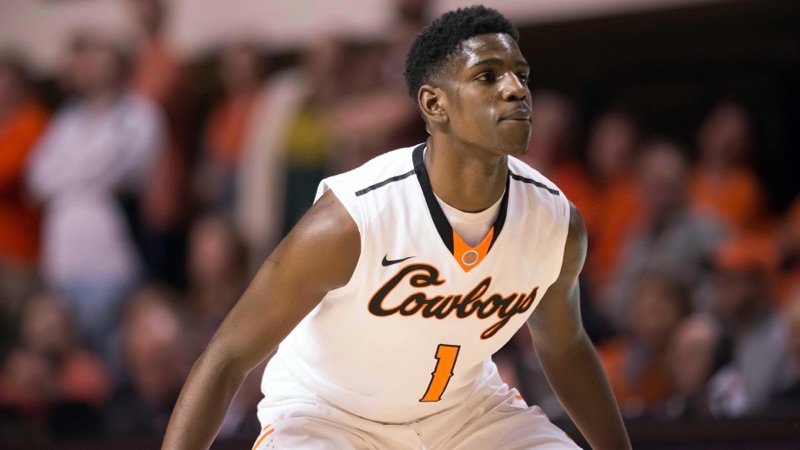 Background: As a fan, Jawun Evans was my second favorite player to watch in college basketball last year behind Monte Morris. I absolutely loved the way he played the point guard spot and the way he used ball screens to his advantage. He dramatically improved his stats from his freshman year as you take a look at his per-40 stats year over year:

He drew a lot of comparisons to Chris Paul over the season due to his height along with his ability to play in the pick and roll. It’s an easy comparison to make, but he’s not going to be the likely Hall of Famer at the NBA level, which is completely fine.

Strengths: First and foremost his biggest strength is playing in the pick-and-roll. Oklahoma State was very pick-and-roll heavy and for good reason, Evans’ derived offense was 56.3% of the time in this set. Oklahoma State scored .996 points per possession when Evans was in the pick-and-roll as the ball-handler, which ranked him in the 82nd percentile nationally. What made him so good in this set? A couple of things, but first was his ability to step back and shoot the three off the dribble at a decent rate. You see here in this play against Iowa State in the Big 12 Tournament he does just that. As he comes off the high ball screen and notices the switch he uses a hesitation dribble to back himself up and has a fairly quick release to get the ball up. The other thing he does is has a nice arc on his shot to get it over the taller defenders.

His best strength with the pick-and-roll is his patience. He lets the big get set and then uses some crafty dribbling to set up the defender and the hedge defender. He doesn’t kill you getting to the rim (more on that later) but can pick his spot to get to the midrange game, an area he excels in. He loves to use an in-and-out dribble to get his rhythm going off the screen but as you can see here once he gets past the screener he tends to get a little wide to set up the cross over on the hedge defender to get to the lane. When he goes to pull up in the midrange he’s excellent at getting his feet together and has a quick jump in to his shot.

His handle really lets him set up his offense at the next level. He can score in ISO sets thanks to this combined with his ability to shoot off the dribble. That’s where teams will look to let him attack next year. Defensively he’s not going to dominate a game, but he is pesky. He averaged 2.4 steals per-40 last year and a large part of that is he’s able to use his size on the ball. While he’s only 6’1″ he does have a 6’4″ wingspan which allows him to get up in shorts and poke at the ball. Off the ball he’s okay at jumping passes, but he’s a much better on-ball defender. He does keep his hands moving, which again when he can use his size to go with that disrupts the offense. The other strength he has on the offensive side of the ball is his floater. He loves to shoot it in the midrange and has great range with it. As you can see here against Iowa State, he goes away from the pick, sees Matt Thomas waiting to take a charge so is able to shoot this floater from the Big 12 logo extended. Much like his jumper he does have a good arc on the floater to get the ball over the taller defenders, something he’ll need to continue to do at the next level.

Weaknesses: Evans needs to drastically improve his ability to finish in the lane. It showed against Michigan and it will be a problem in the NBA, especially if his shooting isn’t consistent. He struggles to finish against bigger guys inside the paint. Around the basket (non post up chances) Evans ranked in just the 35th percentile last season. In jump shots under 17′ he ranked in just the 32nd percentile nationally. He finishes less than 50% chances of his shots around the basket, which is nowhere near good enough for a player like him. His biggest problem besides his size is he’s not a great leaper. He’s not going to finish over you at the rim so he needs to develop other shots using the rim as protection. He needs to get better with reverse layups and scoop shots to take away the height disadvantage. While he is starting to work on different shots, you can see his lack of touch, especially when he starts to get into traffic. He can get careless with the ball as he does average 3.8 TO’s per-40. Again, some of that is due to his height as he’ll get lost in traffic and not be able to see out, trying to force a pass. The other part is where he has to make the passes from in terms of angles. You see a lot of tipped passes when he tries to make a pass, often because he starts it so low trying to throw over the top.

Draft Stock/Projection: I’d be shocked to see Evans fall outside of the first round. He’s capable to be a starting point guard for some teams, but he’s a valuable second unit guy. He can come in and give you scoring and shooting right away as he continues to develop these newer shots around the rim. If he can learn how to finish in traffic he’ll start for any NBA team after his rookie contract. When you look at teams in the bottom 5 picks of the draft, there are a lot of nice opportunities for Evans. He could go to the Nets and start right away or a team like the Spurs and battle Dejonte Murray to be the next in line after Tony Parker.