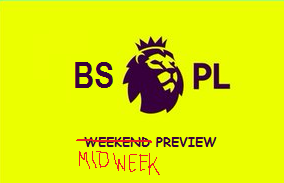 Last weekend had the potential to be a fantastically entertaining soccer spectacle and for once the soccer gods did not disappoint. Chelsea/Tottenham was an exquisitely well-played chess match with multiple orgasmic goals, and what can you say about El Clásico to end all Clásicos? Sure, not everything turned out quite so well – Arsenal/City was a bit of a slogfest and Zlatan’s knee exploded – but all in all it was quite a weekend… I mean, great soccer and Spurs getting shat on? That’s what makes life worth living, amirite?

And because soccer truly is the gift that keeps on giving, now that the refractory period on your sports boner is over, we’ve got a little midweek action to distract you from inconsequential things like work and/or class.

With that, let’s move right along to the meat of this soccer blog sandwich…

We’ve got an abbreviated slate of games on deck so it only seems right to make this an abbreviated blog. Four matches were postponed this past weekend but here were the results of those that did go off: 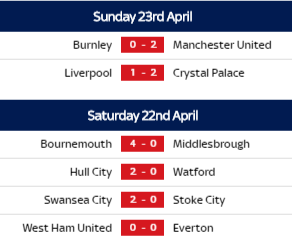 – Listen, I’m not a medical doctor but I’m pretty sure knees don’t work like this: 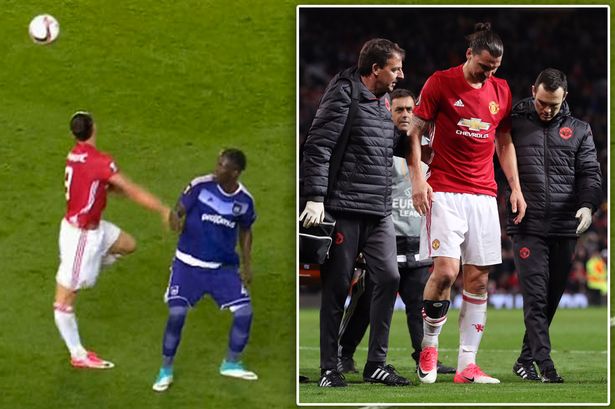 In fact I’m confident that if my knee did that all the ligaments and tendons would have said “fuck it” and let my leg collapse inwards on itself Willis McGahee-style, and they would have had to shoot me like a horse right there on the field. Zlatan got up and walked off. (Also, congrats in advance to LA Galaxy for saving a couple milly on their purchase price.)

– West Ham holding Everton to a scoreless draw is one of those nonsensical results that should at least be a good reminder why you should not let you kids grow up to bet on soccer.

– For those keeping track at home – and keep in mind that we all agreed that Sunderland and Middlesbrough have already been relegated – the four teams battling to stay up ALL WON this weekend, which would be some serious spankbank material for the pro/rel snowflakes if the pro/rel snowflakes weren’t too busy whining on twitter about the big bad MLS all day every day.

Anyway, as things stand this is the table: 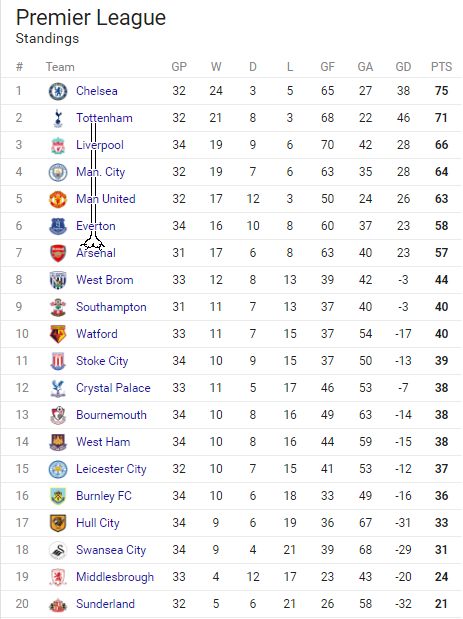 And in you are wondering whether the danglies could get any danglier, the answer is no, we have now officially achieved maximal dangliness. Those puppies are hanging on for dear life at this point. #Pray4TheDanglies

Games on deck today, Wednesday and Thursday include: 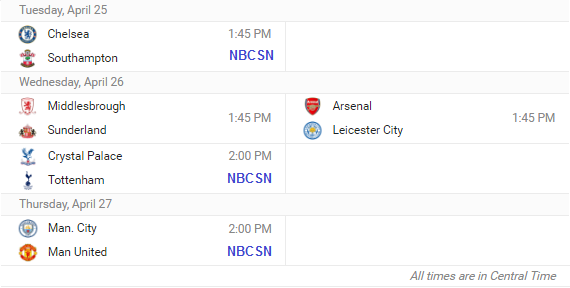 As far as Manchester Dærbies go this one seems to be going a fair bit under the radar but make no mistake: this puppy is important af. At least one of these clubs – fresh off spending the better part of a half-billion on players this past summer – is not going to finish in the top four. This would be a disaster since it would mean no Champions League next season*** from the perspective of bean counting and ability to attract players in the summer window since, after all, nobody in their right mind would actually choose to live in Manchester just to play in Europa when they could do that and live in London by signing for Arsenal.

***unless of course United finishes outside the top four but win Europa, which granted is quite plausible at this point

In fact, since we’ve already played a little just-the-tip, let’s go ahead and start by getting balls deep in that game…

Both squads are essentially walking wounded at this point, with both teams seemingly losing one or more key players with every passing game at this point. In fact it’d almost be easier to list the guys who are healthy at this point rather than those who are going to be missing.

All things considered City is in a little bit better spot than United, if only because their entire squad is currently listed as doubtful (eg, Aguero, Jesus, Fernandinho, Silva, Stones) whereas most of United’s roster is out (Zlatan, Rojo, Mata, Jones, Smalling) – though Dear Leader Jozay is hoping at least one of the latter two will be ready by Thursday. Add to that the fact that Pogba and Herrera limped off against Burnley on Saturday and it is hard to imagine how United is going to field an XI, let alone put up much of a fight against their local rivals.

Making a prediction is a bit tough at this point given all the possible, probably and potential lineup changes that could take place between now and Thursday, but City’s attacking midfield combination of Sane, De Bruyne and Sterling have to be absolutely licking their lips about whatever defense-like amalgamation United is able to scrounge up for this game. And with Vincent Kompany seemingly back and seemingly healthy, it’s hard not to give City a massive edge in this one.

Reminder: the last time United not lost an EPL game Hillary Clinton was about to be elected president, so probably not a good idea to doubt Dear Leader Jozay… but nobody ever confused me with a smart person. City to win 2-0. 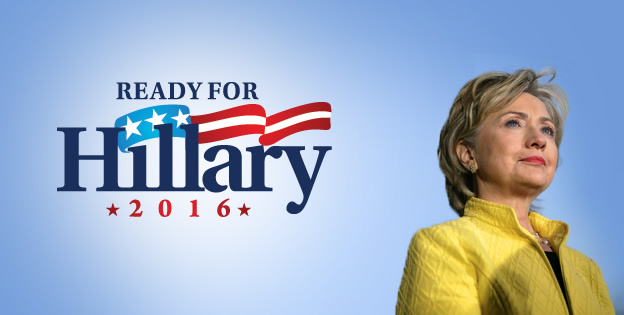 S’gonna be a long wait

Southampton has one chance and one chance only in this game: if Chelsea lay a total egg coming off an emotional high after snaking it til they made it against Tottenham on Saturday. Is it possible? Yeah, maaaaaaaaaaaaaaybe, but it seems unlikely given the type of squad rotation Antonio Conte has at his disposal with almost everybody in the entire team healthy – the contrast with the Manchester squads is glaring and is a reminder why teams truly committed to winning the league should always finish in 10th place the season prior – and with guys like Hazard and Costa extra rested after playing less than a half hour in the FA Cup final (championship division).

So, yes, I’ll be rooting my little balls off for the Saints… but given their extreme inconsistency this season anybody legitimately fancying them in this is probably drunk. Chelsea to win 2-1.

• Middlesbrough [+115] hosting Sunderland [+245] right here right now is just sad. It’s like too drunk homeless dudes fighting in an alley over the last warm backwashy sip of a Blue Raspberry Mad Dog 20/20 they just found at the bottom of a superherpes-infested dumpster. 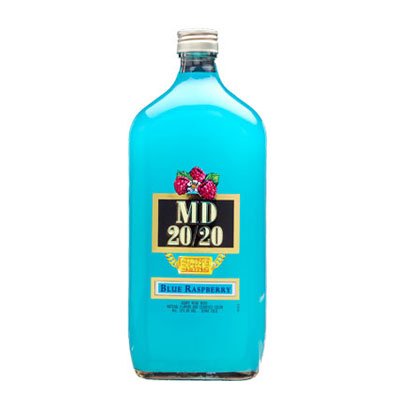 Nectar of the homeless gods

At this point everybody know they are getting booted to the Championship. The players know it. The coaches know it. The fans know it. So this game – like the rest of the season – is strictly about pride… pride and the ability to score goals, an ability that Middlesbrough is in painfully short supply of. Sometimes, after all, a disgusting scoreless draw makes too much to actually happen. I think this is one of those scenarios. Sunderland to win 1-0.

• Palace [+425] come in on fire having beaten Liverpool, Arsenal and Chelsea (not to mention Watford and West Brom) in recent weeks. Tottenham [-170] come off a heartbreaking loss in the FA Cup final (championship division) and it’s almost May, which means it’s almost time for them to forget how to play soccer and find a way to break my cold black shriveled heart all over again. This smells – perhaps reeks even – of a 1-1 draw but I’m not going with that for several reasons. 1) Benteke expended a month’s worth of effort killing Liverpool and is ripe for an off-game’ 2) Spurs stumbling and falling out of the title race right now would be far, far too predictable, and would not cause nearly as much emotional damage as if they waited a few weeks; 3) Harry Fucking Kane. Spurs to win 3-1.

• Ahhhhhhhhhhhhh yes, the matchup of the leagues Jekyll and Hydes. First there was EPLeicester and UCLeicester, and now were have regular crap ArsenaLOL and slightly less crap FA Cup Arsenal. The Foxes [+400] are far better rested and still needs to find at least one win somewhere in order to ensure the safety of another year in the Big Boy Division, which aint nothing considering Arsenal [-175] just played 120 minutes in the FA Cup final (consolation division). But whereas Leicester really really really want points, Arsenal really really really need them if it has any shot at top four. (Lol!) No but yeah, that and Leicester’s injury woes mean I’m going Arsenal to win 2-0.

So there you have it. Short and sweet. Another full slate of games this weekend so don’t miss me too much.

Note: My favorite part of this weekend’s Clásico, btw, was the people getting at me on twitter saying the ref “ruined the game” for giving Ramos a red card for this. Lulz. Dummies gonna dummy.