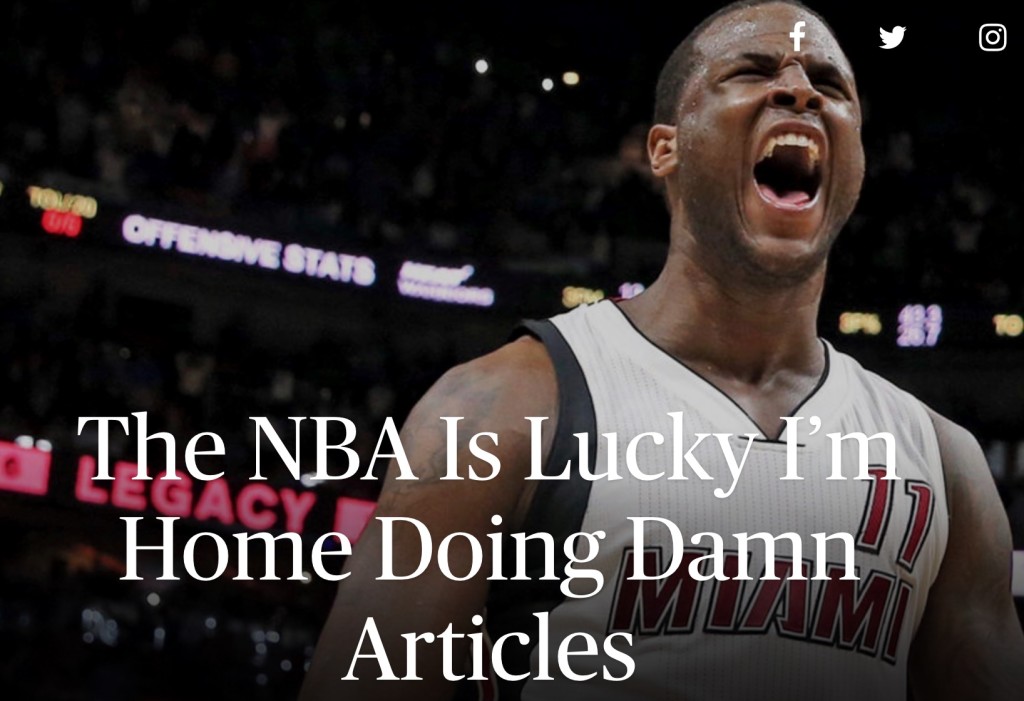 The Players’ Tribune – When I got to OKC, me and [Kevin Durant] were together every day. Kev used to think it was funny, because when we got in the gym and played 1-on-1, I was trying to kill him. Straight up.

Go ahead and ask him who won our last game. Ask him. He’ll tell you.

[When Miami played Durant’s Warriors they] gave ’em everything they could handle. We weren’t scared. I saw right away how Kev was playing me, like he was daring me to shoot the ball. I told him, “Bro, I’m feeling good. You see the last four games? Y’all in for a long night.”

We’re talking trash like we’re playing 1-on-1 back in OKC.

Fourth quarter, 10 seconds left. Tie game. I got the ball in my hands with the game on the line, and I already knew what was gonna happen. F*** an overtime, let’s get up outta here.

What’s the analytics on that? That’s a W.

Then I hit ’em with the pose.

(I know Kev is reading this right now, like, “Thank God this dude is at home doing articles instead of lurking in the playoffs.)

You didn’t wanna see us, Kev!

The whole Players Tribune article by Dion Waiters is worth a read with a lot of interesting stories in there about how he Pat Riley sold him on Miami by promising to “get him into world class shape,” how he once told some hood dude who didn’t believe he was committed to Syracuse “Google me” so that became his nickname, and the story of a friend of his getting shot and how it encouraged him to go as hard as he can on the court. It’s an interesting look at a dude you only know for the “Waiters Island” ballhogging jokes and hearing his story definitely made me like him a lot more.

But even more than that, I love the move of not being in the playoffs and talking shit about how you would have destroyed everyone if you had been. The Heat could maybe make that argument for real after winning 20 out of 24 games down the stretch after starting the season 11-30, barely missing out on playing the Celtics in the first round. But writing a whole article designed to be like “Yeah I had a great year this year, here’s why I shoot the fuck out of the ball, here’s why I’m going to kick everyone’s asses” are the kind of moves that give you hope for next year. And even more than that it’s so cocky and spiteful, just the kind of energy you want guys to bring to the court everyday. Michael Jordan went out of his way to embarrass dudes like Karl Malone or Barkley when they won MVPs because he felt like he was better and was going to do everything in his power to make the world know that. And while he’s no Jordan, Dion Waiters has that same kind of DNA and he’s using the power of a quality blog with some GIFs to do it. The Warriors may sweep the entire Western Conference playoffs this year but Kevin Durant is less of a man because Dion Waiters beat him 1 on 1. Sounds about right to me.