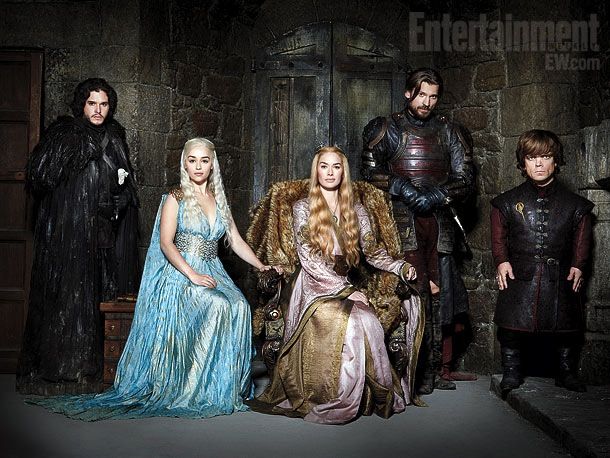 Metro - The Friends gang’s bumper salaries went down in history when it was reported they were earning $1 million per episode – but it seems the Game Of Thrones cast have now well and truly overtaken them. According to reports, the top five cast members from the hit HBO fantasy drama could earn themselves up to £2million per episode. PER EPISODE. That’s a whole £1.2million more than the Friends’ £800k average per-episode, although, it should be noted, that was back in 2003. According to reports, British cast members Emilia Clarke (who plays Daenerys Targaryen), Kit Harington (Jon Snow) and Lena Headey (Cersei Lannister) join US co-star Peter Dinklage (Tyrion Lannister) and Danish co-star Nikolaj Coster-Waldau (Jaime Lannister) in having signed contracts for the seventh and eighth seasons.  It was claimed last November that the big five would be earning £890,000 per episode. But this new report claims they’ll be able to increase their wages to up to £2million per episode thanks to ‘complex bonus clauses’ enabling them to earn the big bucks thanks to shared percentages of syndication payments from the 170 countries around the world which air Game Of Thrones, according to the Daily Express.

Paper boi! Paper boi I’m all about that paper boi! Finna get that Dragon Money! That is a BONKERS amount of money. I know these final seasons are shorter in length so you have to account for that, but just talking a per episode sum of money, that blows every other show out of the water. And I’m absolutely OK with that. For 3 reasons – A) when its all said and done Thrones may arguably be The GOAT 2) Its been getting better as time goes on. Its not like they are mailing it in and churning out episodes that have been stretched out and arent good D) Its like a make good for all the early seasons when they were on their grind. Khaleesi getting raped by Dothrakis, constantly naked. Cersei acting out incest. Jon Snow being the most boring loser ever waiting for his character to take the main stage. The Half Man…well, no, nevermind. Not the Half Man. Tyrion was just motorboating porn stars on the set of Thrones for the first few seasons if anything Peter Dinklage should have to give HBO money back.

Only problem I got is Jaime Lannister being on the same level as those other 4. King Slayer is no doubt an important part of the show and his character is certainly deep as he’s kind of gone back and forth between villain and hero. Good and bad. Most hated to downright sympathetic at times. But I think the 2.5 mil an episode line has to be drawn somewhere and if Jaime makes that money I’d argue Arya should as well. I’d put her above him, even. Obviously I dont really care I want all these people to make bank for putting out maybe the best Sunday night show ever but I find it interesting who makes the cut for top tier money and who doesnt. I’m sure age and experience as an actor comes into play, maybe Jaime will be very important in the final seasons. Theres a lot that could come into play. I’d be fascinated to see the negotiations between their agents and HBO and producers and whatnot.