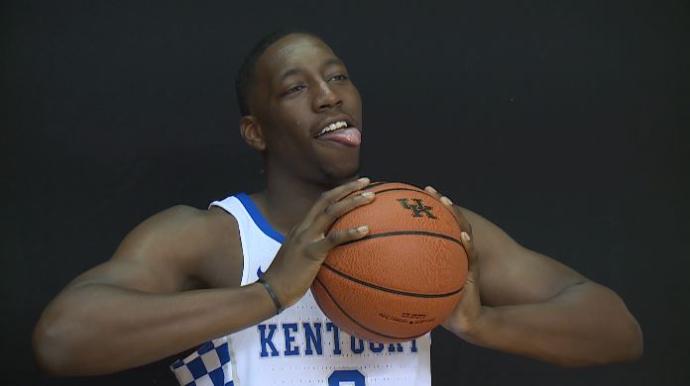 Background: Bam is another 5-star recruit that played for Calipari at Kentucky and while people like to talk about the point guards that have gone through there, it’s the bigs that are the bigger names. Adebayo struggled – I use that term a little loosely here – based on expectations earlier in the season as he adjusted to the tight whistle in the post. Once refs stopped calling that he became a much better player. You could make a case Adebayo was Kentucky’s best defensive player as he was able to switch on guards and do a decent job guarding them out on the perimeter while also being pretty much the only big to play in the post.

Strengths: Perhaps the biggest strength for Adebayo is his physical tools. He’s an absolute freak athletically, who does a great job of running to the rim, finishing at the rim off a lob and is a great jumper off two feet to finish his spin move. He graded out as ‘excellent’ in both transition and pick-and-roll sets per Synergy ranking as high as in the 96th percentile nationally in transition. Those are things you can’t teach, especially to a big, giving him a step ahead of some players that will rank similar on draft boards to him. This play against Georgia sticks out as something that looks relatively easy, but again, is a strength for Adebayo. You see him challenge the ball defensively, end up out of bounds and still finish the lob. He does a good job of taking a hesitation step for timing, letting Monk make the pass. Or the second play against Tennessee is another example of what he can do, in the sense of running directly to the rim, keeping the ball up high and finishing.

Teams will use Adebayo in high pick and roll sets at the next level similar to how he was used at Kentucky. Calipari/Fox would bring him up to any point on the floor, whether it was the wing or top of the key to come set a high ball screen. They would run this early and late in the shot clock as it eventually became the go-to play, especially when Fox was healthy and able to get downhill. Similar to what makes Adebayo strong in transition, translates to the pick-and-roll game. He’s excellent at rolling directly to the rim and jumping off two feet to finish lobs. Passes typically weren’t low to him, keeping him and the ball high in the air. The other thing he does is use his length here as he does have over a 7’1″ wingspan. He also is excellent at keeping his body straight up while contorting his arms to finish tough passes. On top of that he has does a nice job with tough finishes as seen here:

He also does have a 15-footer in him. He doesn’t look to shoot it often, but his form is fine and you can see it even at the free throw line. He was 5th in the country at FT Rate and 76th in the country in fouls drawn/40 minutes. He gets fouled a lot and did a decent job for a big at making teams pay as he shot 65% from the line. There were games he’d struggle and go 1-for-6, but he also has two 10-for-13 games at the line on his resume. His form here on a pick and pop play illustrates a little what I’m talking about. He keeps the ball at a nice high release point, his elbow is tucked in and he has a correct follow through. The biggest complaint is his footwork, but his soft touch (watch the play in whole) makes up for that: 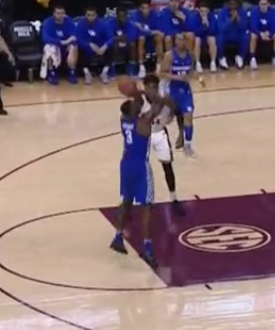 Weaknesses: The first weakness for Adebayo is his size. He’s a shorter center, which just isn’t what teams are dying to have on the floor. Despite his athleticism and decent wingspan, his game is made for him to be a 7-footer. That’s the first reason he’ll slide in this draft. Along with that he can get bullied on the right side of the block. He’s simply not comfortable on that side, as he scores 1.028 points per possession on the left and only .7 on the right. Teams can start shading him that way and forcing him to go over his right shoulder, which is where he’s at his worst. He does need to improve his passing, especially out of the post as he had just a 4.7 assist rate compared to a 15.5 turnover rate. He also doesn’t have a ton of post moves, which is where he can get inconsistent with his touch around the rim. That said he did improve his touch as the season went on, but there are times he gets himself into a bad position and then just throws it up against the glass or rim hoping for a bounce.

Draft Stock/Projection: I do think he’ll end up in the first round since he signed with an agent, meaning some team may have a deal with him in the back end there. I mean, the Spurs and Jazz with the last two picks are both incredibly enticing. Defensively, he’s someone that can easily translate to the NBA. He can step out away from the paint and sit in a stance and has quick enough feet to stay in front of guys while also being strong enough to battle in the post. His leaping ability allows him to protect the rim as he had a 4.9 block percentage, which was good enough for 175th in the country. Offensively is the concern here. He needs to be more consistent with his 15-footer and develop a couple more post moves as opposed to the one dribble, turn and dunk. He’ll be a guy that’s likely on the taxi squad his first year as he develops offensively, but as we see teams do value a defensive guy and that’s who he’ll be.