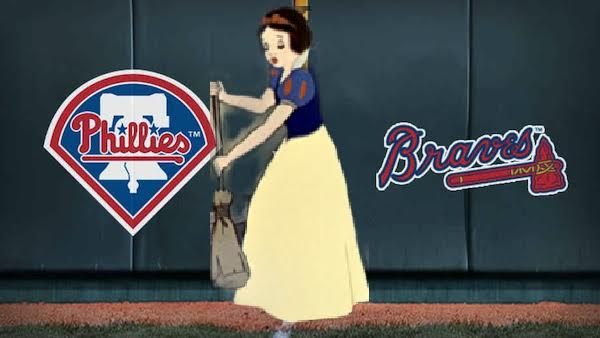 My lord, am I in love with this team right now. The starting pitching continues to mow down the opposition giving up just 8 hits in 19 innings this weekend. Ever since Kendrick went down with an oblique and Aaron Altherr has been getting regular starts, this lineup looks more back than George Costanza after eating a mango.

Don’t tell me it’s only April. When the Mets are two games back of the last wild-card spot going into the last weekend of the season, they will look back at that series against the Phillies in April. I also don’t want to hear it’s just the Braves. I am currently looking at this “experts” prediction on Yahoo Sports who has the Braves finishing in 3rd place in the NL East.

This team is much different from that exciting run we had early last year. Yes, the +7 run differential is a big indicator, but it’s the youth and the exuberance they have been showing the past week that has been so infectious. A series win against the Mets and most recently, the series sweep of the Braves has me wanting to step on the gas and go full throttle fan-boy. But, I am objective. Mainly because have a manager who continues to show why he was a bench coach for 13 years before he Gerald Ford’ed his way into office and a bullpen that makes you bite your fingernails down to the cuticle. Ehh, who cares about all that stuff. The Phillies have won 4 in a row. Let’s try and enjoy the moment while it lasts.

Per usual, Jeremy Hellickson went out and did his thing; 7 IP 3 H 2 ER 5 K’s. In 4 starts this season, Hellickson has 3 wins, that leads the NL. Oh, and a 0.71 WHIP which also leads the NL. Pretty good ROI so far. Yet, in those 4 starts, he has not exceeded 100 pitches once. This is the part I question Pete Mackanin’s ability as a manager again. For a man who is so terrified to burn out his bullpen like he did last year, he sure is very careful with a $17.2m veteran on a 1-yr deal.

Hellickson, who’s spot in the order was not due up in the bottom of the 7th, was replaced by Joaquin Benoit after having thrown only 90 pitches, in the 8th. The 8-9-1 hitters were due up and had been a collective 1-6 vs. Hellickson in the game. I just honestly do not get it. You will notice I assign salary a lot next to our veterans because I think it’s important to realize that these guys are paid that number for a reason. It’s one thing to pull a kid like Nola after 90, but to pull a guy you are paying $17.2m after 90 pitches, right after he just struck out the 5 and 6 hitters in the bottom of the 7th? Why? Especially, after the bullpen had just logged 11 innings in 3 games.

As for the lineup, whenever your 1 and 2 hitters go 5-8 at the plate with 3 runs scored, you’re gonna have a good time. It’s no coincidence why this team is performing so well at the plate this season compared to last season and much has to do with the the top of the order. Last season, the 1 and 2 hitters batted a collectively .259 and a .322 OBP. Small sample size but through 18 games this season, 1 and 2 are hitting .344 with a .401 OBP. The 1.09 runs per game they averaged last year has skyrocketed to 1.83 so far this year. With Cesar Hernandez at the helm and Aaron Altherr to follow, I fear for opposing pitchers right now.

What a ridiculous and unnecessary sweat Saturday night was. Again, I do apologize because I am sure you are growing tired of my constant badgering of Mackanin, but I honestly have no clue what is going through his mind half the time. The beat reporters in this town will never report this kind of stuff so it’s up to the homer, residing in mom’s basement baseball blogger to break it down for you.

Having Edubray Ramos close instead of $6.5m Pat Neshek who set up for him was your gameplan? Stop trying to get cute, Pete and try to win a fucking game. Also, why wasn’t our $8m set-up man, Joaquin Benoit available after only throwing 32 total pitches at this point in the week? What happens if Ramos blew the save (which he did) and we have to go into extras? Would Benoit be available then? Instead, you send out Jeanmar in the 10th of a tie game AGAIN (ie April 14), which to me and the actual fans watching, means you are conceding defeat, Pete. After a leadoff single and poor defense, Jeanmar blows the game. Thanks to the offense in the bottom of the 10th, you are given another free pass.

First off, that play needed to be made by Brand Phillips, but of course he tries to showboat. Anyway, how about Maikel seeing a ball through the zone and driving it the opposite way! The front 5 going 8-22 with 4 RBI accounted for all of the offense, but it was their defense that almost blew the game. Miscues by Cesar early and Maikel and Tommy Joseph in the top of the 10th, were ugly, fundamental mistakes. Errors happen and the defense has been very, very strong all season, but they can’t fold like they did at that point in the game. With Freddy, Odubel and Altherr running the show, this defense should continue to be a strong suit all season.

Lastly, the Phils need to start helping out my man Jerad Eickhoff. 1.1 runs of support per game in 4 starts this season is just not fair. His pitch count was high and he couldn’t reach the sixth inning (9th time in 18 games Phillies SP failed to reach the 6th inning), but he was borderline unhittable. When you can backwords a left-handed hitter with a 12-6 curve the way he can, then you know you have something very special in a pitcher.

Remember the name Zach Eflin people before his knees give out worse than Kyle Broflovski after his negroplasty. This kid is an absolute stud. Since he was called up last week, Eflin is proving to all the haters who questioned his health wrong. How about 7 strong allowing only 1 ER and 3 hits. How about holding Freddie Freeman, who had been 10 for his last 22, hitless. How about pumping up to 95 and a two-seamer that tails about 3 feet back into the strike zone. I like him. I like him a lot.

Mike Foltynewicz cruised through this lineup with ease, but once he was pulled after 7, it was time for the boys to go to work.

How about them apples?! This team doing actually something similar to our World Series champs. Come to think of it, Brad Lidge that season used to load the bases every other outing before converting 48 saves in a row, sort of like what Neris has been doing. Hmmmm. I think we might be on to something here….