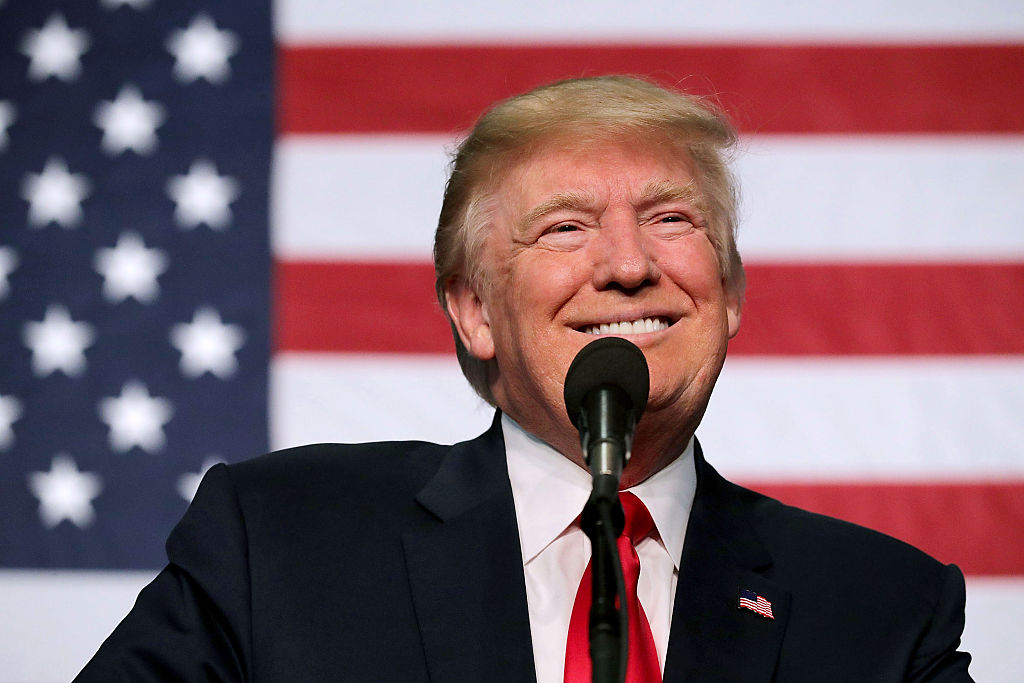 Trump recently sat down with the AP for a wide-ranging interview. AP dropped little teasers last week but released a more full transcript last night. It’s amazing. It’s got Donnie dropping all sorts of gold so let’s break it down.

TRUMP: Did you see Aya (Hijazi, an Egyptian-American charity worker who had been detained in the country for nearly three years) …

AP: Can you tell me a little bit about how that came about?

TRUMP: No, just — you know, I asked the government to let her out. …

TRUMP: You know Obama worked on it for three years, got zippo, zero.

AP: How did you hear about this story?

TRUMP: Many people, human rights people, are talking about it. It’s an incredible thing, especially when you meet her. You realize — I mean, she was in a rough place.

“You know Obama worked on it for three years, got zippo, zero,” lol.

On his handshaking situation with the German Chancellor.

TRUMP: Yeah, it’s funny: One of the best chemistries I had was with (German Chancellor Angela) Merkel.

TRUMP: And I guess somebody shouted out, “Shake her hand, shake her hand,” you know. But I never heard it. But I had already shaken her hand four times. You know, because we were together for a long time.

TRUMP: They had a quote from me that NATO’s obsolete. But they didn’t say why it was obsolete. I was on Wolf Blitzer, very fair interview, the first time I was ever asked about NATO, because I wasn’t in government. People don’t go around asking about NATO if I’m building a building in Manhattan, right? So they asked me, Wolf … asked me about NATO, and I said two things. NATO’s obsolete — not knowing much about NATO, now I know a lot about NATO — NATO is obsolete, and I said, “And the reason it’s obsolete is because of the fact they don’t focus on terrorism.” You know, back when they did NATO there was no such thing as terrorism.

Just admitting he didn’t know anything about NATO. I actually wouldn’t mind that at all if he had said that from the outset. It’s an endearing concept — “Hey I’m a businessman not a politician. I don’t know shit about NATO but I’ll figure it out.”

But that’s not what he did. He literally said NATO is obsolete without knowing anything about it.

TRUMP: Yeah. Let me give me an example. A little before I took office there was a terrible article about the F-35 fighter jet. It was hundreds of billions of dollars over budget. It was seven years behind schedule. It was a disaster. So I called in Lockheed and I said, “I’m sorry, we’re going to have to bid this out to another company, namely Boeing,” or whoever else. But Boeing. And I called in Boeing and I started getting competing offers back and forth. …

TRUMP: I saved $725 million on the 90 planes. Just 90. Now there are 3,000 planes that are going to be ordered. On 90 planes I saved $725 million. It’s actually a little bit more than that, but it’s $725 million. Gen. Mattis, who had to sign the deal when it came to his office, said, “I’ve never seen anything like this in my life.” We went from a company that wanted more money for the planes to a company that cut. And the reason they cut — same planes, same everything — was because of me. I mean, because that’s what I do.

On having a heart.

“Never heard of Wikileaks, never heard of it. When Wikileaks came out, all I was just saying is, ‘Well, look at all this information here, this is pretty good stuff’… I don’t support or unsupport.”

This on a meeting with Rep. Elijah Cummings.

“Well he said, you’ll be the greatest president in the history of, but you know what, I’ll take that also, but that you could be. But he said, will be the greatest president but I would also accept the other. In other words, if you do your job, but I accept that. Then I watched him interviewed and it was like he never even was here. It’s incredible. I watched him interviewed a week later and it’s like he was never in my office. And you can even say that.”

I don’t even know what this means but reading it in Donnie’s voice is funny.

TRUMP: [Chinese] President Xi [Jinping], we have a, like, a really great relationship. For me to call him a currency manipulator and then say, “By the way, I’d like you to solve the North Korean problem,” doesn’t work. So you have to have a certain flexibility, Number One. Number Two, from the time I took office till now, you know, it’s a very exact thing. It’s not like generalities. Do you want a Coke or anything?

Those are the highlights to me. The full transcript can be read here. The word “unintelligible” is making the rounds on the internet from this thing — 16 times during the 1-on-1 interview, Donnie’s words were literally indiscernible. No clue what he was saying. That’s an old hockey trick — mumble completely unidentifiable things to kill time and get yourself through tests. “Intelligible,” as they say.