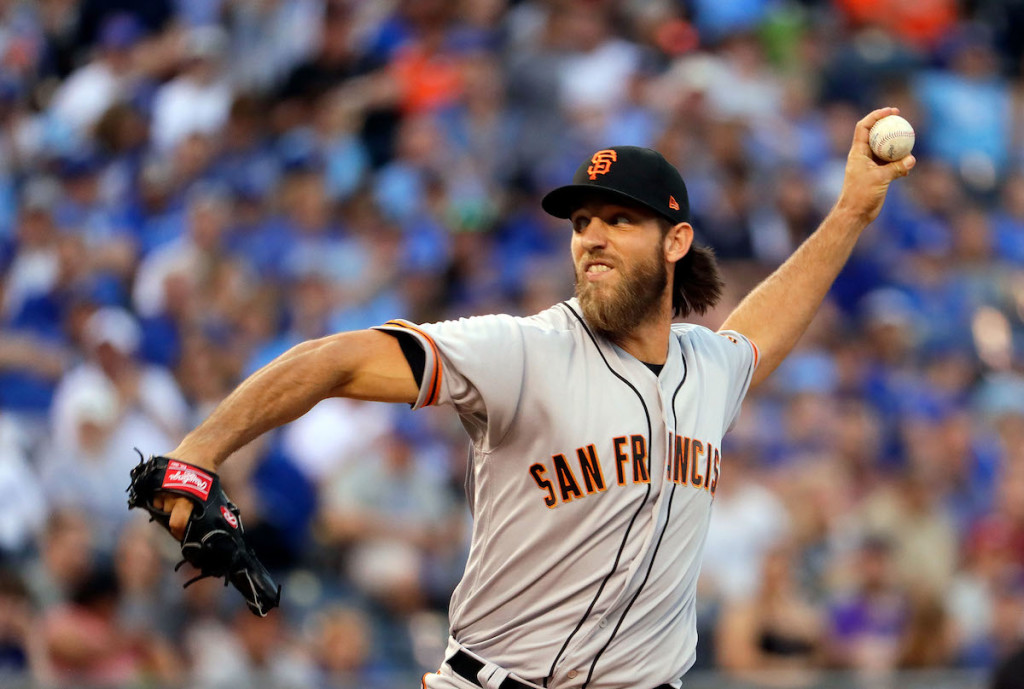 Things just got worse for the last place, 6-10 San Francisco Giants, because they’re gonna have to do battle without their ace Madison Bumgarner for a little while. Here’s what Ken Rosenthal’s got:

The Giants today placed left-handed pitcher Madison Bumgarner on the disabled list with bruised ribs and a grade one or two left shoulder AC sprain. Bumgarner sustained these injuries yesterday during a dirt bike accident on the team’s off day in Denver, Colorado. Bumgarner is out of the hospital, currently resting at the team hotel and will be reevaluated next week.

FFFFFFUCK, it’s the left shoulder. ANYTHING but the left shoulder. It’s April, so spare me the statistics right now in that he’s 0-3 with an un-Bumgarner-like 3.00 ERA. He’s one of the best pitchers in the National League. Scratch that — he’s one of the best pitchers in baseball. Period. Rosenthal had reported that 6-8 week window that Bumgarner could be out, and I’m not sure if that means that’s when he can start throwing again or begin rehab starts or when he’ll be back on a major league mound, but it could be a rocky road in the meantime, as Giants starters not named Madison Bumgarner have combined for a 5-5 record, 4.42 ERA and a 1.35 WHIP so far this year.

I’m sure the hot takes are going to be out in full force after this one, like players who make that kind of money and are depended on as highly as Bumgarner is in San Francisco shouldn’t be doing shit like riding a dirt bike on the team’s off day. But who are we to tell these players what they can and can’t do in their spare time, especially if they’re technically allowed to?

The NFL has been all over shit like this in the past. This is from a report after Kellen Winslow’s motorcycle accident back in 2005:

But two league sources said Monday night that Winslow’s contract includes language which is even more specific and limiting, and which expressly forbids riding a motorcycle. Many teams include such specific language in the addendums to contracts, especially those involving high-round draft choices. An agent who negotiated the contracts of some high-round Cleveland draft choices in recent years said the Browns routinely include such restrictions.

So, as rare as motorcycle/dirt bike accidents are when it comes to baseball players, maybe it’s not the worst idea to include that language in big-money contracts. You’d hate to take away something that these players enjoy to do in their free time, but it’s either that, or running the risk of having to deal with this situation that the Giants are currently left to deal with.