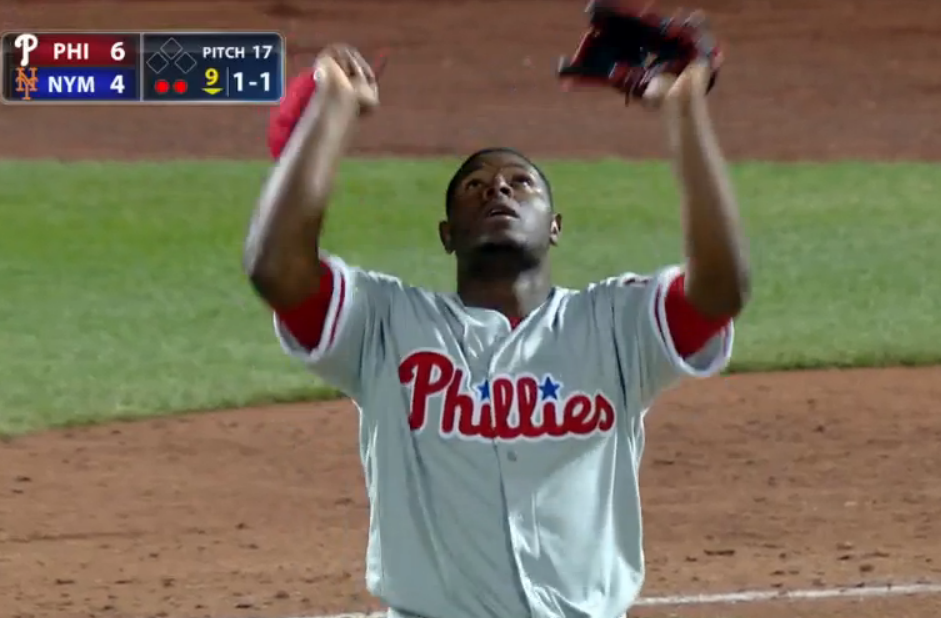 Entering last night’s game, Noah Syndergaard had a 4-0 ERA with a 1.37 ERA against the Phillies. Seven shutout innings every time he faces this lineup has a very high probability. That was until the 2nd and 3rd inning happened. 5 Runs (3 ER) on 5 hits, a hit by pitch and 2 errors by the defense brought back fantastic memories of the Implodin’ Mets. The Phillies went on to take the series behind some sneaky bats and a stellar bullpen performance.

First and foremost, to all the Mets fans reading this and ready to yell at me for using your trademarked word, “Believe,” in the title, Noah Syndergaard in my eyes is the best pitcher on the planet. I would give up the entire Phillies franchise for him. Despite a couple bad innings, which I will attribute a lot to the defense, he struck out 10 and walked 0. In the series, Phillies starting pitching struck out 8 and walked 10. And props to Terry Collins who is probably my 2nd favorite manager in the league behind Bochy, for tossing out Syndergaard in the 7th with 99 pitches. That’s called not giving a fuck about sabermetrics and unwritten manager guidelines and trying to win the game at hand, Pete Mackanin. Take notes.

The home run ball is killing Phillies pitching. Their 1.63 HR/9 average is last in the MLB and out of the 24 they have surrendered, 14 have been with men on base. Even worse, they have allowed 11 home runs in 2-strike counts. The walk in front of the home-run has been a staple of the pitching staff this season as well. It happened last night, the night before and few other times this season. This time, Neil walker took advantage of a hanging curve and to no one’s surprise, it was 2-strike count.

Nola looked terrible last night. He had no command of the strike zone, walked 4 and gave up 7 hits. To his credit, he was gifted with a 5-1 lead and protected it until being pulled after the 5th. This marks the 8th time in 15 games a Phillies starter has failed to reach the 6th inning. Bad!

The Bullpen was the story of the series. They went 11 innings, surrendered 5 hits and walked just 2. They went 4 scoreless last night with Hector Neris notching his first save of the season. This bullpen is fierce right now as Larry David would say.

I am not sure what got into Maikel. A double, home run and a walk! I can’t believe my eyes. I keep reading about his exit velocity and how it’s like 20th in the league or something, but I am going to need to see a lot more out of him before my I move him from Defcon 3 in my confidence scale. All that exit velocity shit means is that he has been grounding out to shortstop harder than most.

Tommy Joseph is starting to heat up a little bit, but I need more fly balls out of the guy. His GB% of 54.1 is second to Eric Hosmer for highest in the MLB among 1B. Odubel can’t be going 0-5 if we expect to win and like most hitters after a hot streak, Cesar has lost his stroke a little bit. Howie Kendrick getting injured is the best thing to happen to this lineup so far this season as Aaron Altherr has been able to flash some of his brilliance. Altherr in my mind is the x-factor of this team. I’ve said it so many times that things happen when he is in the lineup. Subbing in for an ill Michael Saunders last night, he continues to take advantage of his opportunities and hopefully, starts to force Mackanin’s hand a little bit. Howie and/or Mike, you are definitely on the hot seat.

I’ll work on a weekend preview and shoot it over later in the day. Go Phils.
Follow @PhillyTByrd