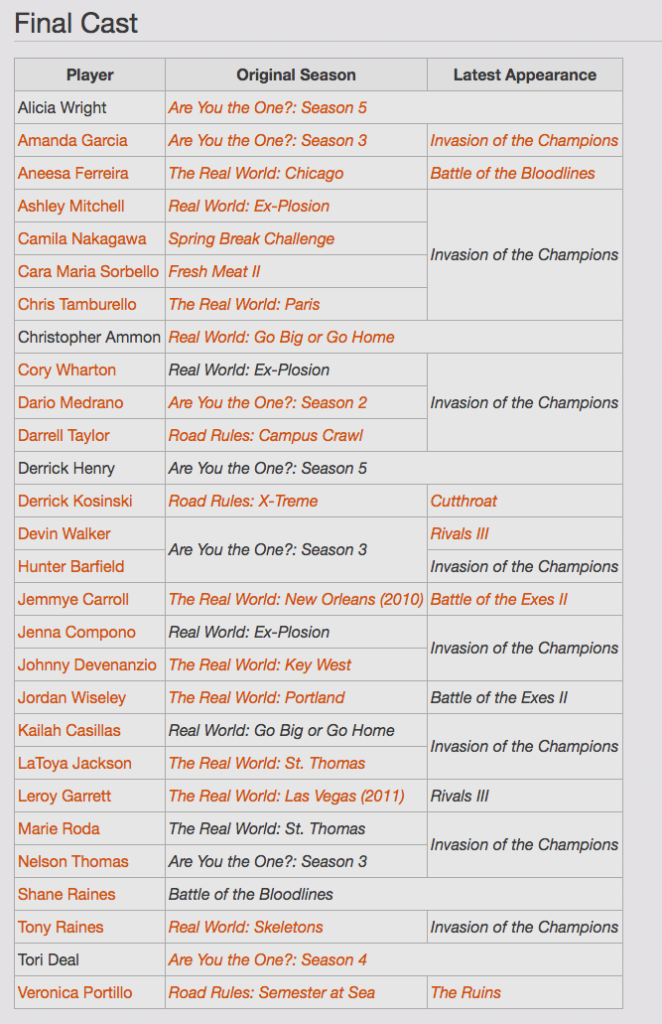 LETSSSSSSS FUCKINGGGGG GOOOOOOOO!!! Now listen, do I see the dreaded words “Are You The One?” more times than I would like in that chart? Of course. Those words trigger me more than any other words on television. But I think my love for some of those nostalgic names can overpower the awful taste AYTO leaves in my mouth. Look at that lineup of heavy hitters. Bananas. CT. Darrell. Roy Lee. The return of Derrick The Pitbull! There should be plenty of CTE to go around in the elimination rounds with that group of fine gentlemen. As we learned this season, Bananas is not an auto-winner when the big dogs are in town. Should be a fun competition on the guys side of things.

And this group of women ain’t too shabby either. Friends of Barstool Cara Maria and Camila are always entertaining (and Camila beating Laurel in an elimination was more impressive than Mississippi State defeating UConn in women’s hoops). America’s Sweetheart and my future girlfriend Jenna will probably make it at least to the last few episodes of the season while charming our socks off the entire way. Diaper Breath, Jemmye, and Kailah can all be spectacular trainwrecks. And it looks like Veronica is making a comeback. Not quite as bad a bitch as Coral was in her prime, but definitely one of the old school mean girls of The Challenge, even though she lost some street cred when Julie tried to kill her.

And don’t think I forgot about the Raines brothers teaming up again. Tony slaying chicks while Shane sasses his ass off. When a duo. What a family.

Now the big question is what this season’s theme will be. We had Champs vs. Underdogs this season and it was underwhelming. The Champs barely got any screen time while the Underdogs supplied a ton of drama but were super unlikable. Not sure if they could do a Old School vs. New School or what. Maybe a Rivals, since they make up rivalries if necessary. Exes seems doubtful. I don’t know.

What I do know though is that CT is back in my life again and it truly makes everything okay. I just love that guy. Always have, always will. Whether he is threatening to eat faces off or just playing coy CT with his glasses and a smirk on. He’s Number 1 on my guest wish list for Podfathers right now. I was ready to take a break from The Challenge if a team with Nelson, Cory and Ashley win a ring in the next few weeks. But with this new cast I have no choice but to give the next season a chance. Here’s to hoping they don’t fuck it up.

And if you would like more Challenge talk (there are more Challenge Stoolies than I would have ever imagined), make sure to follow the @NoQuitters podcast on Twitter and subscribe to the podcast on iTunes. Nothing like listening to idiots talk about idiots.

P.S. The Challenge being on Season 30 makes me feel old as fuck. And I am someone that wakes up with the aches and pains of a 50-year-old man every day.