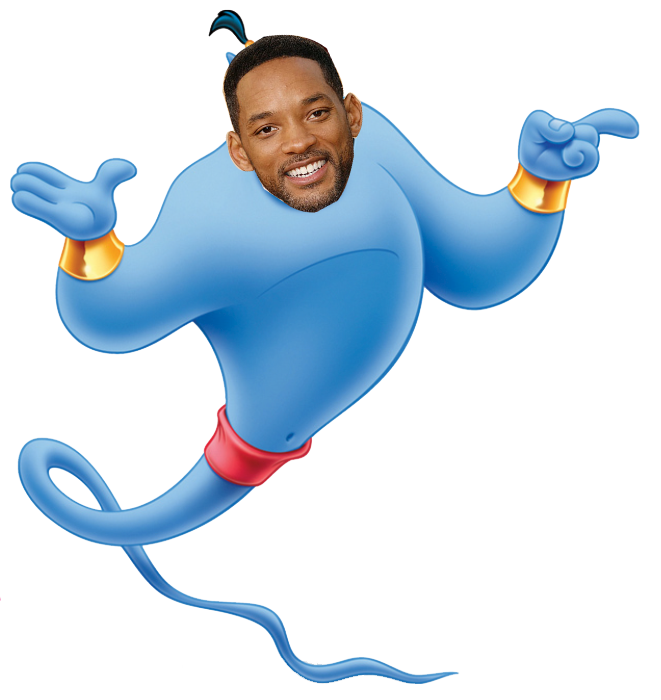 Deadline- Will Smith is in talks to take on the genie role made famous by the late Robin Williams in Disney’s live-action Aladdin from Guy Ritchie, we hear. The adaptation of the animated feature follows the studio’s strategy of bringing its classic animated titles to life and so far it has been a goldmine, most recently with Beauty and the Beast which has already grossed over $1B worldwide. Smith had previously been in talks with Tim Burton about Dumbo but that did not materialize and we’re told these talks are also early.

I want to be excited by this news. I want to believe that one of the greatest Disney characters ever, which is no small praise in my book, is in good hands as Mickey Mouse continues to squeeze every drop out of their franchises by making live-action remakes of his greatest hits. But I can’t and it breaks my heart. Will Smith should have been the perfect choice of the genie. The Fresh Prince was born to fill the Size 100s that Robin Williams left behind. But at some point, Will Smith stopped being the Fresh Prince. He forgot being the fun loving guy from west Philadelphia born and raised. And if that wasn’t bad enough, he massively over corrected his persona. Sure we had some fun moments earlier in his career with Bad Boys and shit. But now he is just a guy looking to cash that check with shitty movies (for the most part). And lets not forget that he is responsible for the birth of Jaden Smith. You simply CANNOT discount the karmic penalty from creating an asshole like Jaden Smith.

I think at some point you lose whatever it is inside of you to be Genie in Aladdin. The Will Smith that the world fell in love with is not the Will Smith that would be in Aladdin. And if you don’t nail the Genie character, Aladdin is trash. Sure Jasmine is a smoke and Abu is a fantastic sidekick. But Genie is the LeBron James of the Aladdin. The Tom Brady of those Arabian Nights. If you whiff on Genie, you whiff on the entire movie. I hope I’m wrong, but I think we get the regular, boring current day Will Smith and the Aladdin movie will be worse off for it. Unless the casting agent saves the day and pulls the plug on Will Smith as Genie before it can happen.