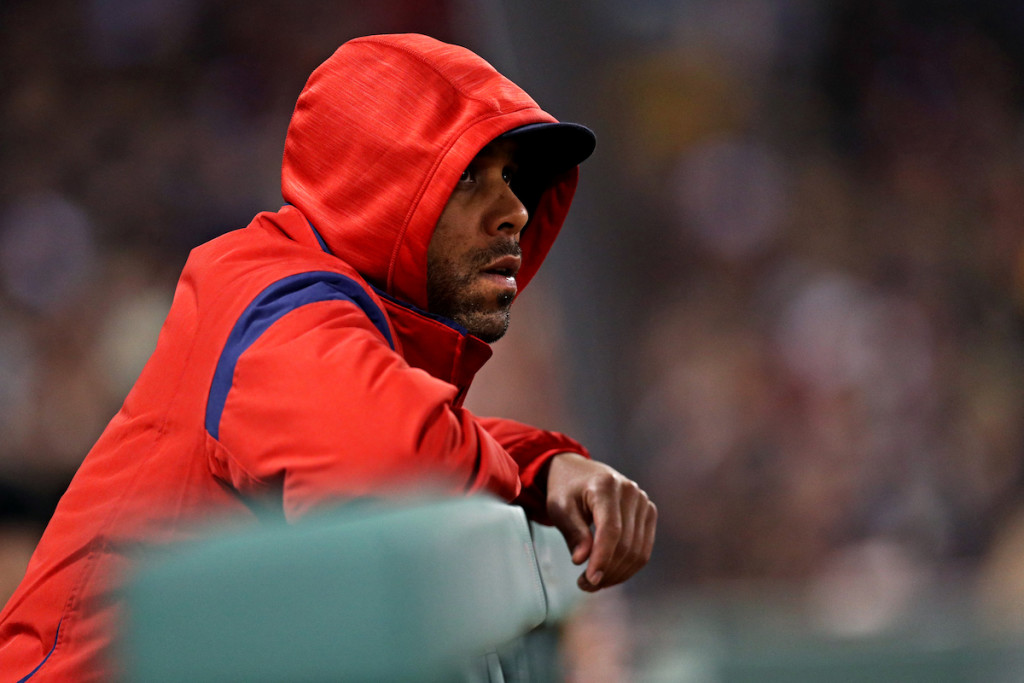 I’m a firm believer in the whole “no news is good news” mindset when it comes David Price and his recovery, but I feel like there actually has been news — it just hasn’t really been front page news for whatever reason.

Price still started the season on the disabled list, and has been on the road to recovery ever since. Last week, Price threw bullpens on Monday, Wednesday and Saturday, and according to CSN’s Evan Drellich, John Farrell told reporters that Price was going to start throwing his curveball during Wednesday’s bullpen. He didn’t. Then, he said it again before Saturday’s bullpen. Still no curveball.

He’s not 100 percent confident his elbow injury won’t eventually result in surgery. “We’re going to find out,” Price told MassLive.com. He brushed off a suggestion that he must be frustrated. “It’s all right,” Price said. “I’ve been through it before.” But when? “2013,” Price said.

Not this long though, right? “Longer than this,” Price replied. Price missed from May 16-July 2, 2013 with a strained left triceps. He still made 27 starts that year and finished with a 3.33 ERA. Price said trying the rehab wasn’t his call. He’s doing what Dr. James Andrews and Dr. Neal ElAttrache said to do initially and now what the trainers are telling him. “I’m not a trainer,” Price said.

I’m often guilty of reading too much in between the lines, but doesn’t this sound like Price wanted to get the surgery and the doctors (and possibly even the team) wanted him to try the rest and rehab approach instead? I mean, I get it. You’ve invested $217 million in this player, and while Tommy John surgery has a high success rate, it isn’t perfect. There’s no guarantee that a pitcher will ever be able to take the mound again after they undergo the surgery. And the older you are, the longer the recovery is going to take.

This is obviously a more extreme example, because of the age difference, but Bronson Arroyo underwent Tommy John surgery in the summer of 2014, and we didn’t see him again until the start of this year. Again, extreme example because Price is 31, and Arroyo was 37, but I’m sure the concern for an extended recovery time beyond the traditional 12 months has to be there.

The other newsworthy note that has come out of this is that Price obviously isn’t convinced that the rest and rehab will actually work. Is that really even news at this point, though? I feel like the general consensus amongst Red Sox fans is that we’re kind of just delaying the inevitable here. I don’t think many fans are confident that Price is going to give them very much this year (insert joke from salty fans about how he wouldn’t have given them much even if he were healthy), if anything at all.

I honestly can’t tell if the Red Sox are just taking their sweet ass time with Price, or if the recovery isn’t going as well as they’d hoped that it would. If it’s not going well, I can’t imagine that they’d just outright admit that, either. With Chris Sale in the fold, there’s really no need to rush Price back right now, especially if both the player and the team aren’t sure if he’ll end up needing surgery regardless.

Based on all the reports from actual doctors who know a thing or two about the injury that Price has sustained and the surgical route versus the rest and rehab route, I think it’s fair to say that the Red Sox are probably going to end up regretting not sending Price to the operating table back in March. Just a gut feeling that I can’t shake.

And as I finished this blog, I saw this tweet.

This John Farrell quote is from two days ago:

“He’ll be back on the mound. We just know the volume and intensity that last week presented to him, [and] we’re making sure he goes through some long toss and continues to build,” manager John Farrell said Tuesday at Rogers Centre.

Price threw out to 90 feet on Tuesday and will throw to 120 feet on Wednesday. After that, the Red Sox will determine what’s next.

Asked if Price was dealing with any kind of soreness, Farrell said, “No.”