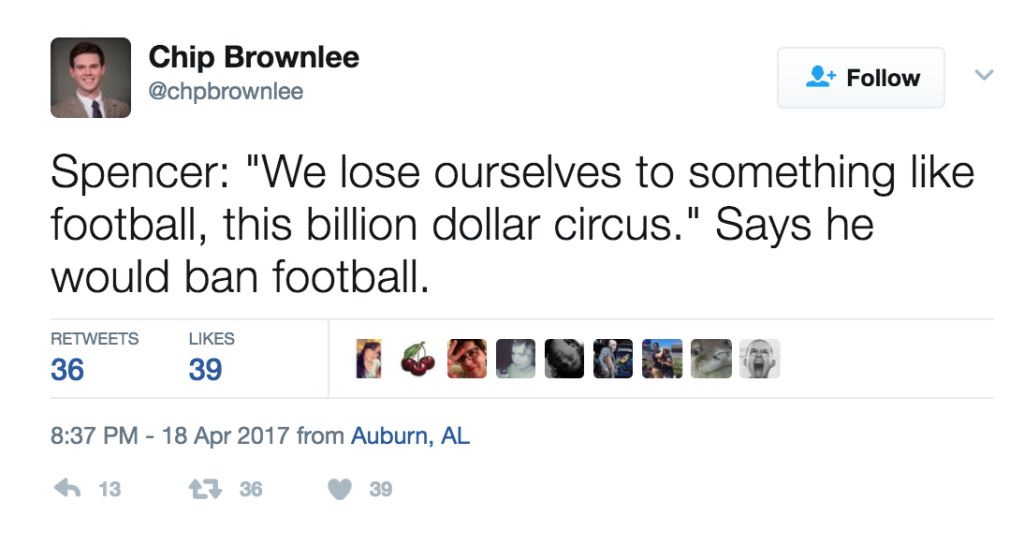 For alumnae of this institution to be funding these kinds of programs, to be bringing in people they have nothing in common with, that they would not allow into their homes, people who walk around campus like they own it, who engage in all sorts of activities including sexual abuse of white women on campus. [applause] The notion that that is some great source of identity, well, call me a little bit skeptical.

[crowd yells over each other]

But I think this, this embrace of something as sick as the Southern football industry, the SEC and all this stuff, something as sick as that, we are covering up some hole in ourselves. We are rooting on people that you have no connection to, that don’t represent you–they don’t represent you–you’re rooting on this sick industry to substitute for that hole in yourself. … instead they’ve substituted some disgusting bullshit football game.

When the Nazi fuckboy tells you football is disgusting and should be banned:

I know that people, especially in today’s climate, are incredibly divided on a lot of issues politically.  Every topic has become incredibly polarizing.  The right and left have never been farther apart.   There are daily protests in the streets and counter-protesters protesting the protesters often ending in punches being thrown.  Nobody can see eye to eye on anything.

But if there is one thing, and I mean ONE thing, that every party, race, religion and creed can agree on – it’s that anybody who tries to ban football should be arrested and probably publicly executed.   Like…without question.    So if the disgusting blatant racism and overall nauseating existence of Richard Spencer wasn’t enough to turn people off before, telling a crowd at Auburn that the SEC is trash and that football should be banned should be the cherry on top.