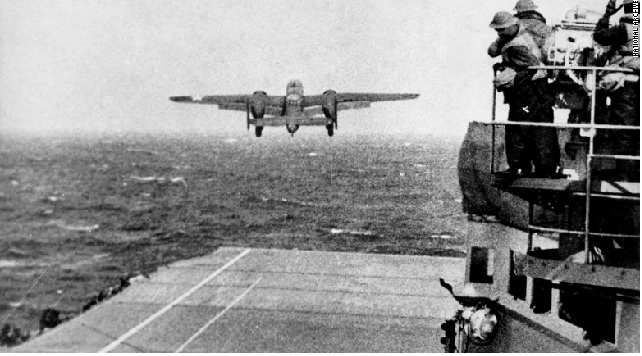 CNN – Richard Cole was not thinking much about the future when flying in the surprise Doolittle revenge raid on Japan 75 years ago Tuesday. He says he was scared all the time. Now, at age 101, he is the last survivor of the 80 gallant men who successfully bombed Japan and delivered a giant morale boost for the United States just months after the Japanese attack on Pearl Harbor.

The Doolittle Raiders were beloved by a nation caught up in World War II. … The 80 pilots, navigators, engineers, bombardiers and gunners took off in B-25 Mitchell bombers from the USS Hornet in the Pacific Ocean bound for Japan. A bomber takeoff from the deck of an aircraft carrier had never been done. … Cole was the co-pilot in the lead plane alongside the commander of the mission, Jimmy Doolittle. …

The raiders flew at very low altitudes to avoid detection, 200 feet above the water. The planes arrived over Tokyo 12 hours ahead of schedule, making it a daylight raid instead of the planned night raid. … Then the race was on, as gas ran low, to land in mainland China and seek help from Chinese supporters who were living under Japanese rule. …

Back home, the raid was stunning news, with screaming headlines about the raid on the front page of daily newspapers. Japan was shocked. Cole said, “It told the people of Japan their island could be struck by air.”

Everything didn’t go completely smoothly. Eleven crews had to bail out of their planes. Four bombers crash-landed. Pilot Ted Lawson lost a leg. He would go on to write the best-selling book “Thirty Seconds over Tokyo,” later a hit 1944 film. One crew flew to the Soviet Union and was interned before eventually being set free. Eight men were captured. One starved to death in a Japanese prison camp and three were executed by the Japanese. …

He said he would like to be remembered along “with the rest of the people that had an impact on winning the war.” I asked Cole if he felt he was a hero. A quick response. “No.”

There are two elements of this story that make it blog worthy today. The first being that, as we spend the next four years or so commemorating the 75th anniversary of all these monumental WWII events, that some of the less remembered moments like the Doolittle Raid don’t get lost in the shuffle.

The Doolittle Raid doesn’t get the mention of the truly decisive battles, but you can’t overstate how much it meant to the American psyche. Do the math. The great, 9/11-like cataclysmic shock of Pearl Harbor happened on December 7th. Which means the American public had to sit and wait for the Pacific Fleet to rebuild and come up with any kind of response for almost five months. Five months of wondering if we were even capable. Of men like Richard Cole leaving their families to go enlist. Of air raid drills. Rationing. Of waiting for the next shoe to drop, like the Japanese Navy landing in San Francisco or wherever. And just when national morale was at the breaking point, these 80 men of vision and courage figured out a way to launch bombers off aircraft carriers, hopefully find a safe landing in China, and kick the enemy right in the balls with steel-toed boots by bombing their biggest city. It was a suicide mission. And took an incredible amount of guts to even attempt it. But it was exactly the boost America needed to get into the fight.

The other reason is to acknowledge something that is all too real. That we are fast running out of Richard Coles. Valiant men who did nothing less with their youths than go out and save the world from tyranny and eternal darkness. He was 26 when the raids happened and defied all the odds to make it to triple digits. Which means we are very close to seeing the last of the WWII vets. Because Father Time is still undefeated.

Fortunately we still manage to produce men like him. This is not going to turn into some diatribe about how bravery only belongs to the Greatest Generation guys, because his kind of selflessness is on display every day,stateside and around the globe. This is just to appreciate that, whether he’s willing to admit it or not, that Richard Cole and the iron-willed airmen who pulled off America’s first engagement of the war will always be heroes, in every sense of the word.
@jerrythornton1