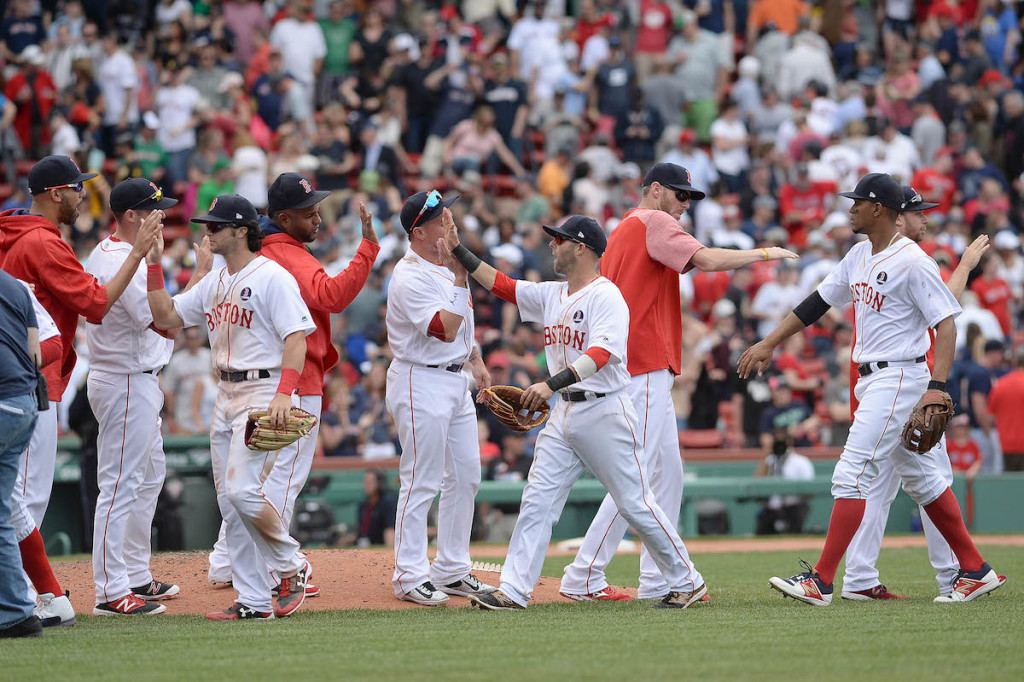 This series started on Friday night with Rick Porcello getting crushed by the Tampa Bay Rays for four homers and eight earned runs, but it ended with the Red Sox taking the next three straight.

Every year, you have your spring training storylines and then you have your regular season storylines that develop along the way. A major spring training storyline for the Red Sox was how great their rotation was. Thirteen games into the season, and that storyline has evolved into how great Chris Sale is and how bad/unreliable/injured everyone else has been. Steven Wright’s last trip to the mound was even worse than Porcello’s debacle against the Rays. The knuckleballer matched Porcello’s four homers and eight earned runs allowed, but did so in three fewer innings, lasting just an inning and a third.

On Monday, Wright looked to be heading in a similar direction when he allowed three consecutive hits to start the game. A couple of ground outs plated a pair of runs, and it was another “here we go again” moment for Red Sox pitching in the first inning. The Red Sox have an ERA of 9.00 in the first inning this year, although both of those runs in the first for Wright were unearned. Only the Nationals have a worse first inning ERA (12.00), so if it feels like the Red Sox are always playing from behind, it’s because they are. To his credit, Wright settled in nicely after that, allowing just one earned run and kept the Rays in the ballpark with no homers.

Andrew Benintendi went 0-for-4 on Saturday to drop his batting average to .238 and his OPS to .673 on the year. Sunday and Monday, he went 6-for-9 (nice) with two doubles to boost his season totals to .314 with an .821 OPS. For those who were starting to think that maybe hitting atop the lineup to start the season was a little too aggressive for a 22-year-old rookie, you should also take a step back to realize that it’s April and April numbers fluctuate pretty drastically in short periods of time. He’ll be just fine.

Here’s another example of that — on Thursday, Mookie Betts was hitting .174 with a .470 OPS. Over his last four games, he’s 9-for-17 with three doubles, so now he’s hitting .325 with an .800 OPS on the year. I understand the concern about the lineup now that David Ortiz is gone. That’s undoubtedly a huge blow, but this team can still flat out hit.

They may be last in the majors in homers (6), but they’re first in the majors in doubles (29), so things could be a lot worse. You could be the Toronto Blue Jays, who just absolutely suck at every aspect of the game right now and have a 2-10 record. That’s not you. The Red Sox are 8-5 and only a game out of first place. Not that scoreboard watching should be a thing in April. Only losers like JJ do that.

In the ninth inning, Craig Kimbrel was called upon for the third consecutive game. Kimbrel is another guy that had a shaky first couple of games, but has been as dominant as ever since then. After striking out the side, Kimbrel worked his fourth consecutive 1-2-3 inning to earn his sixth save already. In his three straight saves against the Rays, Kimbrel faced nine batters and struck out seven of them. Is that good? He’s also converted his last 25 consecutive save opportunities. I can’t wait to talk to Mazz on the Baseball Reporters tonight about how he thinks Kimbrel isn’t an elite closer. Should be fun!