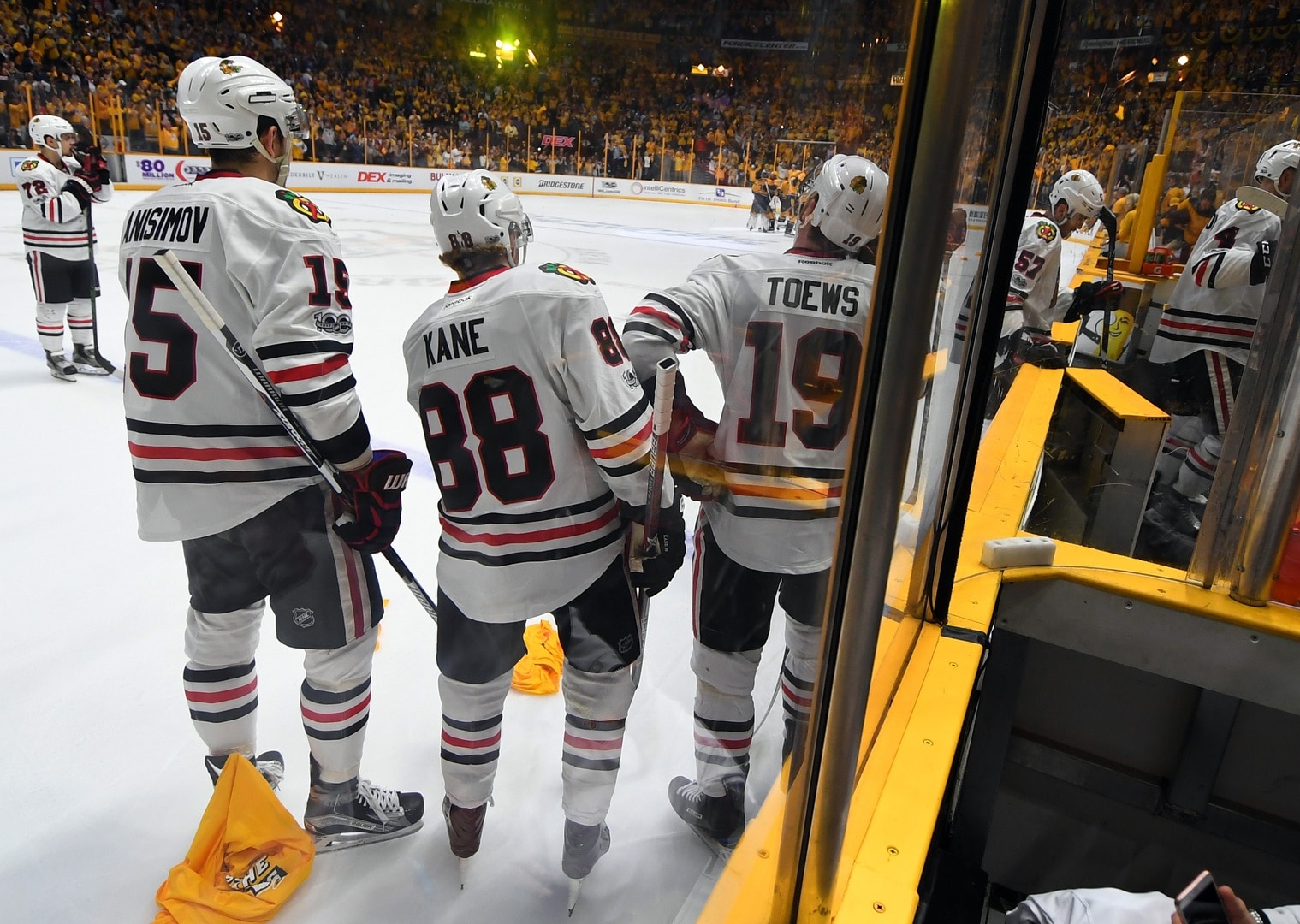 As hard as it is to admit, the Blackhawks deserve to be right where they are. You can’t sleep walk through Game 1, get rolled in Game 2, and then cry when calls and bounces don’t go your way on the road in Game 3. The Predators have been faster, smarter, hungrier, meaner, and tougher than the Blackhawks. I am a big believer that in the playoffs you make your own luck. So while that goal in the 3rd period to get the Predators on the board was pure luck, they earned it by being the better. When you out-work your opponent consistently you tend to get those types of bounces. The Blackhawks have nobody to blame, but themselves. They have the more talented team, but they don’t appear to have the sand needed to win playoff games. 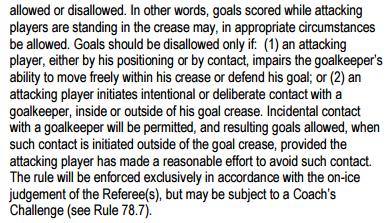 Points (1) and (2) in section 69.1 say to me that it was interference. Contact made prevented Corey Crawford from being able to freely defend his goal and the attacking player initiated contact. I don’t think you can call that contact initiated by Arvidsson “incidental”. Crawford was in perfect position at the top of his crease. He makes that save on Forsberg if he wasn’t interfered with. It was consequential contact and prevented Crawford from being able to play his position and again “freely defend his goal”. Tough pill to swallow.

–Corey Crawford deserved a win last night. He was spectacular. He allowed the Hawks to weather the storm from Nashville in the first period, which allowed the Hawks to take their first lead of the series later in the game. Crawford was far and away the Blackhawks best player last night and his save in OT would’ve been replayed 1000 times if the Blackhawks went on to win that game.

–I don’t like to call out individual players too often, especially when the team is down 3-0 and it’s an easy time to be negative, but the Blackhawks all of a sudden have a real depth problem and it’s because some guys that they were really counting on to be key players haven’t performed.

The most obvious guy right now is Johnny Oduya. It’s to the point that you can say Oduya has the yips when he has the puck. Its a fire drill whenever he has it. Bad decisions with the puck in the offensive zone, can’t seem to make an outlet pass to save his life, and can’t even clear the puck out of harm’s way. This is not the Oduya we saw the last go-round in Chicago when he was absolutely NAILS in 2013, 2014, and 2015. He did show signs of this in Dallas though. He straight up doesn’t want to have the puck on his stick. Zero confidence to his game and I don’t know how or if that can be fixed. To my amateur eye, he still moves pretty well. I don’t think it’s a case of a guy simply being washed up, but he certainly isn’t right. I don’t think the Blackhawks would turn to Kempny or Forsling at this point, but if they did I wouldn’t mind it.

Artem Anisimov doesn’t look right either. He obviously missed the last mont of the season with an ankle injury and perhaps its still not fully healed. He looks a step slow and hasn’t be strong on the wall or in front of the net. That has caused some struggles for Kane and Panarin. That line hasn’t had any sustained zone time and it’s because Anisimov can’t drive possession because he can’t win races or battles. He freed those guys up all year long because he was able to retrieve pucks, get it back to 88 and 72, and then create space by going to the front of the net. It’s also tough drive possession when you’re winning 11.8% of your faceoffs.

Finally, our boy Ryan Hartman. Hartman had such a great rookie season. He scored, he hit, he played hard, he played smart. He vastly exceeded expectations. He’s been a different guy in the playoffs. Give aways, not winning races, he hasn’t been good along the boards, and he’s making major mistakes at both blue lines. A turnover at the blue line last night got him benched again. In a game that went deep into OT, Hartman only had 12 shifts and 8:36 of total ice time. He hasn’t been the player the Blackhawks needed him to be. I’m stunned. I thought of all the rookies his game would naturally transition to playoff hockey the best. I thought he would THRIVE in the playoffs. Going to the net, working his ass off, and getting under the skin of the Preds. We just haven’t seen it. Love his potential, but the Hawks really need more from him.

When you have a top 4 dman, your top offensive center, and a vital top 9 winger all under-performing at the same time its tough to have great depth. Instead the Blackhawks were forced to play 2.5 lines to Nashville’s 4, and have a Dman you were counting on to give you 24-26 great minutes, lead to a lot of heavy shifts for Nashville because of turnovers.

–The Forsberg-Johansen-Arvidsson line has been an absolute bear. I’ve never seen Johansen play this well or this intense. He’s always been a one-way player and kind of a dog, but he’s been a sonofabitch in this series. Both coaches seemed to be okay with the Toews line going against the Johansen line, but it might be time for Coach Q to switch things up because they’re having a tough time with that group. The Blackhawks need offense from the Toews line and it’s tough to score when you’re hemmed in below your goal line the entire time. Let Kruger handle those guys.

–I complained about the officiating during the game last night. Nashville is getting away with assault every time the puck is in their zone. Cluth, grab, hack, whack, slew foot, whatever…nothing is being called. Well you know what…credit to Nashville. They’re being sonsofbitches out there and getting away with it and it’s resulting in turnovers, low danger possession by the Hawks, and Nashville winning battles. They’ve been hungrier and meaner. The ref watched Subban slewfoot, hold, and tackle Toews last night and did nothing. He watched Hossa try to pull the puck away from the wall, Mike Fisher pull him down from behind with his hand over Hossa’s shoulder and did nothing. Eventually the Blackhawks have realize how the game is being called and do all the same shit right back to Nashville. The refs are consistent with their lack of calls and the Hawks haven’t amped it up. How you let Subban slew foot your captain and don’t try to whip his ass and get in his ear is beyond me. Recognize what is going on in the game and adjust. Be a god damn animal out there. Fuck. And maybe, just maybe, if you battle back and a the game gets out of hand with a fight, the ref will realize it’s out of hand and start enforcing the rules. That would favor the Hawks and create more space on the ice simply by, you know, being allowed to move and skate realitively freely.

–All year, and really for the last two years, I’ve seen Hawks fans talk about Kruger and TVR can walk in the expansion draft or get traded or whatever and it’d be fine. Well last night is a prime example of why those guys are so valuable. Kruger was arguably the Hawks best player last night. He has brought the right amount of intensity every single shift and his work along the wall finally got the Hawks on the board this series. That line was great all night for the Hawks and I hope Q tries to match Kruger against the Johansen line in Game 4.

TVR has been steady as a rock. When he is confident and focused he is a legit top 4 defenseman and we saw that on full display last night. He was steady as a rock, had a great stick, great gap control, and battled hard. He played with many different partners last night and was effective with all of them. He has always gotten a SHOCKING amount of hate in Chicago and it never made sense to me. I really hope that’s over now because he has been in good in all three games this series and I’m not sure you can say that about anyone else on the team.

–Back to Toews real quick. He’s obviously a great player defensively and effective regardless of what the score sheet says, but the Hawks need him right now. They simply don’t have the depth in previous years. It’s not good enough for him to just be a shut down center. He needs to score. He’s now gone 12 straight playoff games without a goal going back to 2015 and that is preposterous.

–When it comes to a lineup for Game 4, Joel Quenneville just needs to pick the 12 guys he trusts the most and roll with them. The Blackhawks clearly ran out of gas late in the 3rd and in overtime, and it’s probably because the Predators are getting good play from all four lines while the Blackhawks are realistically only playing 10 guys. That’s not good enough. I also think it’s time to split up Kane and Panarin. Those guys have had nothing but one and done type possessions because Anisimov can’t get it back for them. Split them up and put each of them with two guys who can win battles and retrieve the puck for them. At least, in theory, each of them would have the puck more and that would be a good thing for the Blackhawks.

If that’s the line up then all three lines can skate, create, and retrieve pucks. Then your 4th line just needs to give them 11-12 minutes to bang and crash and play to a draw. Maybe get some energy.

I am honestly stunned by how this series has gone. I didn’t think it would be easy. I anticipated a lot of one goal games, but at the end I thought the Blackhawks talent would win out. That obviously hasn’t been the case. They haven’t been able to adapt to the style of this series and the Predators have earned all the luck they need. We’ll see what kind of pride this group has in Game 4. It’s pointless to bring up Vancouver in 2011 or other times the Blackhawks have come back. This is a different group. The veterans are just a little bit older and the young guys are unproven. I thought that mix would work in the Blackhawks favor. Having a new crop of talented, hungry, young players. It hasn’t worked out that way to say the least. We’ll see if this team has the pride that we’ve seen in previous years, so far they haven’t shown it. I’m a sick and twisted individual. Even though the Blackhawks are down 3-0 I just can’t quite bring myself to throw in the towel. I know the team I saw in February is in there somewhere. This team can’t let themselves get swept. Just win Game 4. Then Game 5 is at home and who knows.