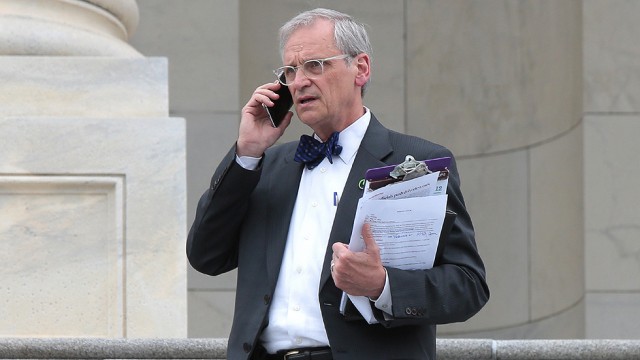 A House Democrat has introduced legislation to enhance the Constitution’s presidential removal procedures in response to concerns about President Trump’s behavior.

Rep. Earl Blumenauer (D-Ore.) filed the bill during the House’s two-week April recess to empower former presidents and vice presidents of both parties, in coordination with the sitting vice president, to determine if a president is fit for office.

“It is hard to imagine a better group to work with the vice president to examine whether the president is able to discharge the duties of the office. When there are questions about the president’s ability to fulfill his or her constitutional responsibilities, it is in the country’s best interest to have a mechanism in place that works effectively,” Blumenauer said in a statement.

Ole Earl is acting like the prime example of what is wrong with American politics. Instead of spending his time doing more worthwhile shit, Earl is being cute with a bill that he knows won’t pass. How does he know it won’t pass? Because he’s introducing it to a republican dominated House, Senate, and White House. Seems like it might have juuuuussttt a touch of opposition going through the various levels of government.

Instead of having his resources, like staffers, write legislation aimed at helping people, he’s writing dead-on-arrival legislation (kinda like those 60 times… yes 60 that the republicans voted to repeal the Affordable Care Act).

Let’s look at how this bill would play out for President Trump.

Former Presidents who are alive:

Hmm I wonder why this Democrat fella wants this to be a new law? Seems pesky to go through articles of impeachment in both chambers dominated by the sitting chief executive’s party so let’s just pen whip this problem.

Just an incredible waste of time. Both parties do it. The political peacocking in today’s polarized climate cements that most politicians only care about power and not what is actually happening to their constituents.

I wish everyone was as level-headed as the greatest American President, President Josiah Edward Bartlett, in situations like this but instead, some people, like the Congressman from Oregon, act like morons.

Oh, additionally, President Trump would also have voting power if he was removed, right? Seems problematic.