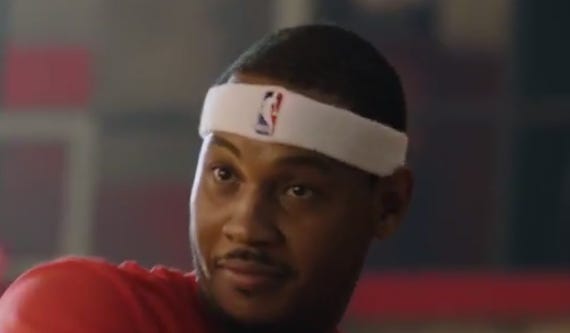 TMZ- Carmelo Anthony was messing around with a woman who now claims she’s pregnant with his baby — and as you can imagine, his wife, La La, is pissed … TMZ Sports has learned. Multiple sources tell us … the other woman often works at a gentlemen’s club in NYC, and we’re told she’s claiming to be 6 and a half months pregnant with Melo’s child.

We’re also told she has made it clear to Melo she expects him to kick in for medical expenses and other baby related costs. Sources close to both Melo and La La are telling us the marriage has been rocky for a while — and while the pregnancy wasn’t the tipping point, it certainly didn’t help. So far, neither side has filed divorce papers but we’re told there’s virtually zero chance of a reconciliation.

Oh Melo, no. No, no, no, no, noooooooo. We may have had our differences with your style of play and attitude on the court as well as your cryptic social media persona. But I always liked how Melo actually had a real family life off the court. Sounds like that may be over. Damn. And falling victim to a stripper’s warm embrace is the most Melo thing of all. Not the pro hoes that are crawling all over the hotels on the road or just your everyday New York 10 that could melt a man’s heart to goo with a hard glance and a sundress. But a stripper? Without protection? Even Tiger Woods thinks that’s awful. Yet it’s so goddamn Melo. #JJO for me one time, Carmelo!

And while we don’t know what happens behind closed doors, you have to imagine simply being a part of the Knicks could have played a role in all this. Working for a terrible, dysfunctional franchise like the outfit that fuck James Dolan is running and it takes a toll on all parts of your life. Between his boss wanting him gone, the customers wanting him gone and now even his wife not wanting him around, we call all agree this has been an absolutely BRUTAL run for Melo. Ironically, living by a motto like #StayMe7o is a good way to start rebuilding your life.

Oh yeah and as always, fuck that franchise.