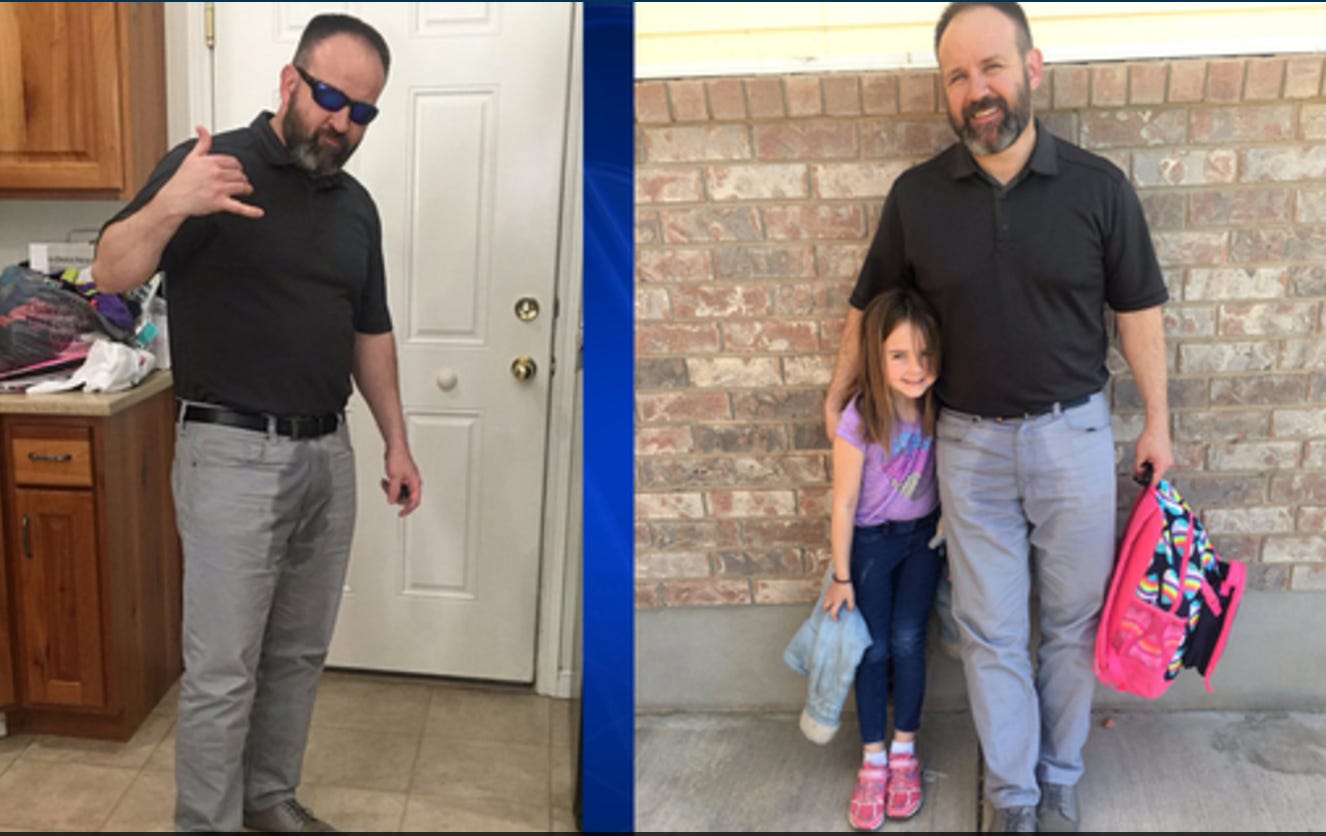 Fox5 - A Utah dad is going viral thanks to the hilarious and compassionate way he handled his daughter’s accident at school.  On Friday, six-year-old Valerie lived every young child’s nightmare: she peed her pants at school. When her dad, Ben Sowards got the news that his daughter was crying and needed to be picked up from school, he said his heart broke. So, before leaving the house to pick up his embarrassed (and wet) daughter, Ben splashed some water on his pants. Yes, this dad pulled a “Billy Madison” in the best possible way.  When he arrived at the school’s office, he quietly asked Valerie if he could borrow her backpack to cover up his “accident.” Valerie quickly went from tears to laughter at her father’s goofy gesture. Her older sister, Lucinda, posted about the incident on Twitter, and the Twitterverse went crazy over the act of solidarity.

The scariest thing as a dad is not being able to help your kid in every aspect of life. As they go through school and deal with friends and enemies and all the bullshit. You try to protect them from as much as you possibly can but when it comes to bullying and asshole kids and pranks and jokes, its out of your hands. Your kids are gonna get embarrassed. They’re gonna get their feelings hurt. You cant stop that from happening.

But you can be right there by their side when that shit happens. Your kid pees their pants you can be right there with them peeing your pants too. Peeing your pants is the coolest. The best part about kids is they are pretty dumb and can be easily distracted. One second they’re crying they had an accident at school and the next second they’re laughing because you pissed your pants too. Make them laugh and they forget all about what they’re upset about. Just a dad and his daughter, walking around like a couple of piss pantsers. The closest bond 2 people can have.

Just a word of advice to Ben Sowards though – I’m pretty sure 6 years old is the cut off for this idea. Any older and this just makes things worse. You try to pull this shit when shes in like 4th grade and its “Hey did you hear about Valerie?? She peed her pants in gym class! And THEN, her dad showed up at school and he pissed his pants too!” All of a sudden the whole school isnt laughing because your daughter had an accident, they’re laughing because it appears as if the entire family doesnt know how to piss right. Institutional Chaos over at the Sowards house. People pissing all up in their pants. You definitely dont want your daughter walking around with that Scarlett Letter.

So, hats off to you, Ben. You got your daughter to laugh through a tough, embarrassing time. But come up with a plan for the next time because in a few years you’ll be nothing but the embarrassing pee pants dad.

Check out today’s episode of the Podfathers. Chaps talks about how bouncers at his church tried to kick his kids out of mass for being loud and I suffered through my first music class with a bunch of loser kids. Download, rate, and review on iTunes!