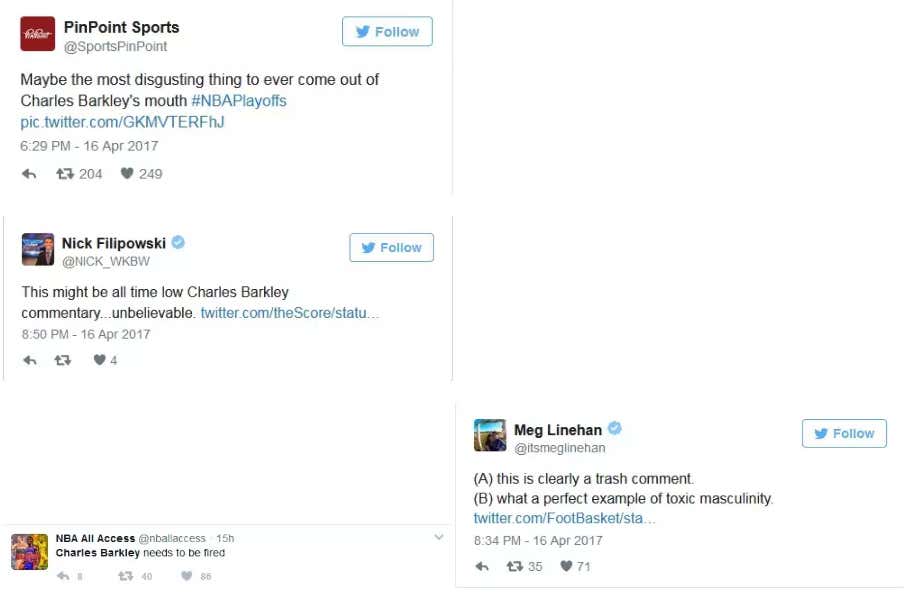 What am I missing here? Charles Barkley, who talks more nonsense than anyone in the American public eye and can’t order a coffee without saying something inflammatory, and this is the comment that gets everyone outraged? You’ve got to really be determined to find something to be offended if you’re going to take something this inoffensive and say it’s firing material.

I’ll concede that it was a clumsy execution, but did anyone listening to that really hear something other than Barkley being sympathetic to Isaiah? You know why he said it was “uncomfortable” to watch? Because it was. Excruciating. No one’s heart wasn’t breaking for the guy. Unless you’re that rare basketball viewer who enjoys watching a grown man grieve over a tragic loss of life. So yeah, Barkley was right. But you have to be a special kind of screwy to twist those words into him saying “Suck it up, ya Nancy or I’ll give you something to cry about” or whatever. And to turn this into a battle in the war of gender politics is just deranged. But that’s life in 2017. Where nothing – even a basketball analyst awkwardly trying to express empathy for athlete crying over his sister’s death – is so innocuous that someone can’t take offense to it and demand you lose your job over it.