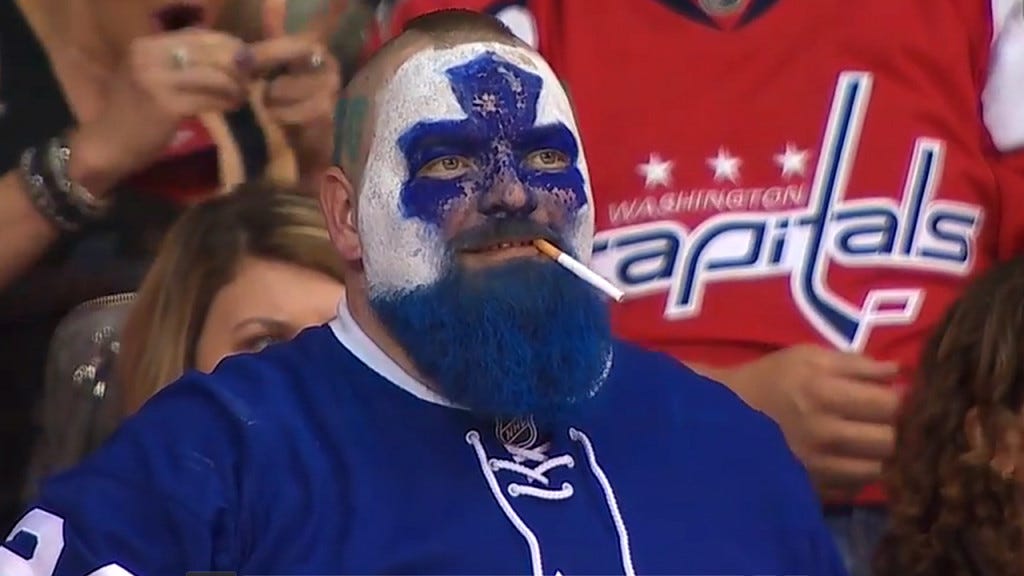 Don’t get me wrong. I enjoyed every moment of Canadian misery last year as their teams went 0-7 in advancing to the Stanley Cup Playoffs. I know you goofy Canuck bastards justify it by bringing up the fact that at least 50% of every NHL team is Canadian born and you hosers just root for your fellow countrymen. But you know deep down inside, that shit stung for Canadians everywhere. Which, on one hand, was glorious. But on another hand, we missed out on one of life’s greatest treasures. That treasure, of course, being Canadian hockey fans in the playoffs. Which brings us to Dart Guy.

Lou Lamoriello. Mike Babcock. Auston Matthews. Dart Guy. The Mount Rushmore of men who will be credited with the resurgence of the Toronto Maple Leafs. The four men who have picked this franchise up out of their darkest hour and are carrying them back to the top.

Dart Guy lives for two things and two things only. 1) The Leafs. 2) Rippin darts. Preferably enjoying both at the same time. But through thick and thin, he’s stuck by both of them religiously. When the Leafs blew a 4-1 lead to the Bruins in Game 7 of the 2013 ECQF after missing out on the playoffs the previous 7 seasons? Dart Guy stayed loyal to the squad. When the nerds starting rolling out all those commercials about how bad cigarettes are for your health? Dart Guy stayed loyal to the cig game. When the Leafs traded Kessel and had their worst season in an already embarrassingly disastrous decade? Dart Guy stayed loyal to the squad. This is what the man lives for. The Toronto Maple Leafs and cigarettes are the 2 sole reasons why he gets out of bed in the morning. And you’re starting to see the payoff now. You just don’t get that with American hockey fans. Sure there are some die hards here and there. But everybody pales in comparison to Dart Guy.