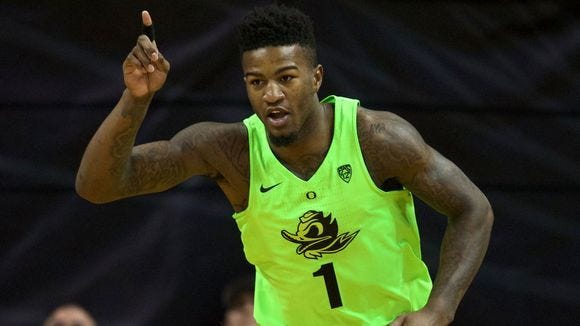 Background: Outside of two plays to end the UNC game and his Oregon career, Jordan Bell was phenomenal in the NCAA Tournament. He was easily one of the two best players on Oregon and you could make the case for him over Tyler Dorsey. Now during the season Bell was overshadowed by Dorsey, Brooks and even Boucher to a degree, but he was the best defensive player in the country, just edging out Jevon Carter. Bell hasn’t officially announced yet, but The Vertical dropped news last night he’s expected to sign with an agent. Bell has denied that this morning, leaving the door open to return.

Strengths: In no way is Bell known as a huge offensive threat or a guy you draft to go get 20 a game. That said there are some parts to his offensive game that show a lot of promise and some moves that will translate to the NBA.

His post up game can look a little disheveled at times as he tries to figure out what move he wants to do, but there are times when he surprises everyone. This play against UNC stuck out to me. First, it shows what he’ll do at the next level in setting a million high ball screens and look to roll hard out of there. The one knock I do have on him during this play is not attacking a much smaller Frank Mason right away and letting Landen Lucas recover. However, he does show patience and doesn’t try to force a shot against Lucas. Instead he takes a couple dribbles and shows – if he can be consistent – a nice touch on a turnaround jumper. Again, if this is something he starts hitting consistently, he’ll outplay his draft position.

Bell is also excellent in transition per Synergy as he scored 1.458 points per possession which ranked in the 95th percentile nationally. It’s one of the reasons he’ll be drafted as he can protect the rim and then get out and run. It’s a little thing in this play, but he fills the wing correctly to let the 3v2 happen and then doesn’t waste any time when he catches the ball. He doesn’t take a dribble. He doesn’t drop the ball. He makes his move, protects the ball and finishes at the rim. Again, nothing major but just small things that go a long way for a guy that’s not known for his offense.

Now what makes him the NBA prospect that he is – his defense. He’s one of the best in the country in covering ground combining with lateral quickness, agility and jumpability, which is part of the reason as to why he’s an exceptional shot blocker. With the move to a ‘small ball’ era, a defender that can protect the rim, hedge/switch on guards and then run the floor is the key. That’s what Bell provides. A look at his advanced defensive numbers show a 9.0 defensive box plus-minus, an 8.4 block percentage and a 2.5 steal percentage. He ranked 44th in the country with that block percentage per KenPom.

Here are two plays against Kansas that show his ability to sit and challenge the shot. The first is in the post against Dwight Coleby, where Bell just sits, lets him try to make a move then challenges the shot leading to a blocked shot. Then against Josh Jackson he extends out to the 3-point line, doesn’t fall for Jackson’s ball fake, stays in position on the dribble and challenges the shot, leading to a miss.

Weaknesses: As I mentioned earlier, his offense is still rather raw. He has to be able to be consistent with that jumper, something he wasn’t this past year at Oregon. He doesn’t have a reliable jumper yet as he graded out as below average for all jumpers in the half court per Synergy. He’s also not a catch and shoot guy yet. He only attempted 14 catch and shoot chances but scored just 8 points out of that set. Teams will dare him to start hitting that 12-footer that he needs to develop. While he is a good rebounder – and excellent on the offensive side of the ball – he can get out of position for defensive rebounds. Most of this is due to fundamentals as he relies on his athleticism here. That has to change at the next level where he won’t be the most athletic player on the court. Lastly, he needs to improve his passing. That was extremely evident against North Carolina, especially when they put pressure on him. He panicked at times and threw a lot of lazy passes. He needs to get better at finding an open teammate and setting them up. He doesn’t turn the ball over a ton, but his passes don’t help at the same time.

Draft Stock & Projection: Bell is one of those guys who wouldn’t surprise me if a team takes a shot on him late in the first, but he should be a second rounder. He did have foot surgery a couple years ago, which is something to always keep an eye on, especially as a big. Again, you’re drafting him to solidify your defense and hope you can turn him into a little bit of a threat on the offensive side of the ball. That’s why he reminds me of a shorter McGee or a not as talented Nerlens Noel. That said, his athleticism should keep him in the NBA for a few years as teams love a guy that can protect the rim.