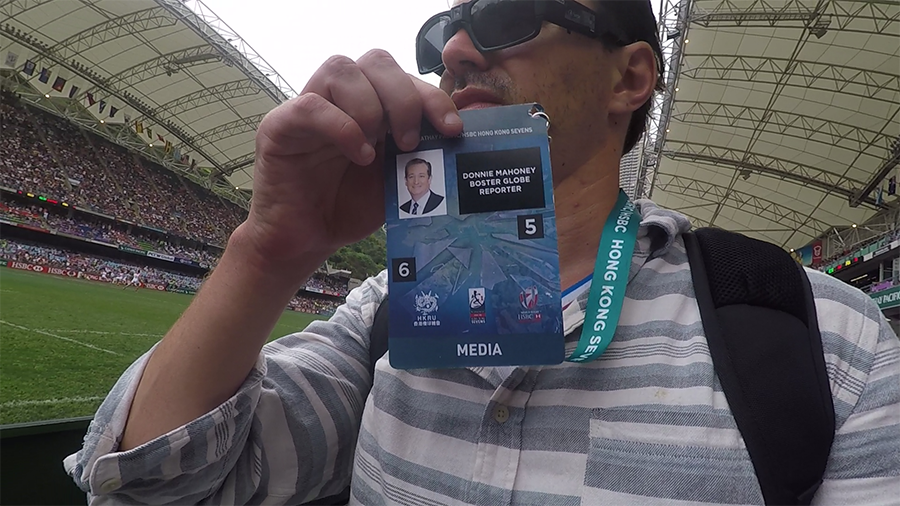 Two weekends ago I went to Hong Kong Rugby 7s and It’s easily one of the most aggressive sporting events on the planet. If you took Halloween, Mardi Gras, and the Super Bowl, mixed them in a pot with some Asian spices and a little British pomp and circumstance, and then threw in a few cups of piss, you’d have something similar to Hong Kong 7s. It’s not super popular amongst Americans for obvious reasons but every year huge numbers of Brits, Europeans, Aussies, Kiwis,  Africans, and Fijians fly to Hong Kong just for the weekend to experience it.  Most of the madness is centered around the South Stands, an area of the stadium quarantined off from the rest of the stadium, where revelers throw on  the most absurd costumes they can think of and spend the day getting as drunk as humanly possibly while maybe watching  5-10 minutes of actual rugby. 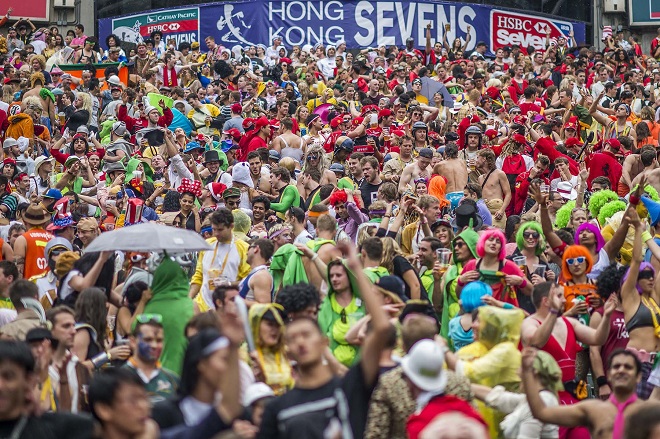 In order to get into the South Stands You need to show up at around 7AM or else you’ll be waiting in line for about 3-4 hours as they close them off once they reach capacity. But once you’re in. ANYTHING GOES. I have never once seen someone kicked out of the South Stands for being too intoxicated or causing too much mayhem. Towards the end of each day its common to see savages up in the top rows tossing full cups of piss towards the front but it never seems to put a damper on the fun. Hell, last year some kid straight up passed out in the Urinals and was just left there until he woke up and realized his entire career prospects had just been flushed down the literal drain. 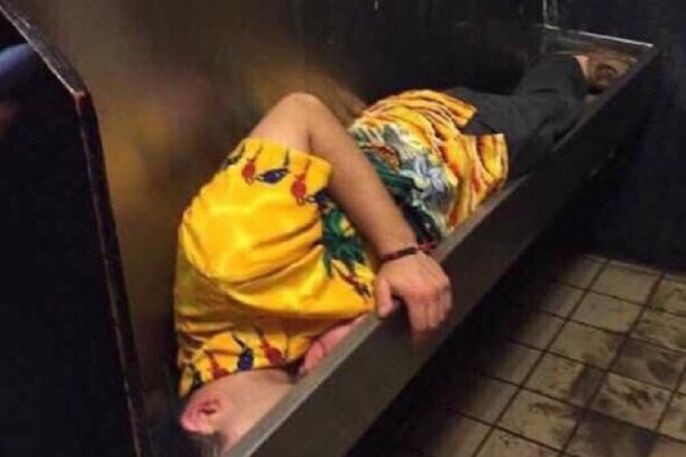 Honestly, I think this is how all sporting events should be. Section off a part of stadium where fans can be as drunk and rowdy as possible. That way if you go to a game with your parents/children/significant other, you know as long as you don’t sit in that one specific area you don’t stand the chance of being harassed by drunk assholes. And if you go to a game wanting to get LOOSE, you know you can sit in a certain area of the stadium and not run the risk of being harassed by hardo security guards and families trying to act like legit human beings.

Well anyways this event ain’t cheap. Around $370 for a Saturday ticket. That’s why when I went HK7s for the first time back in 2015, when I didn’t have anything resembling a full-time job, I decided to sneak in and hopefully get some good content out of it as well. My thinking was, hey, if I can sneak into the ring at a Pacquiao fight, a rugby tournament should be a piece of cake. I was 100% right. Snuck in both Saturday and Sunday.  Although I don’t know if I would use the word “snuck” as I was blatantly caught both times but just kept on pushing past security guards while screaming “I have a ticket!” Luckily this was all caught on tape.

The footage of this incident sparked an international debate on whether or not “white privlege” was alive and well in Asia. 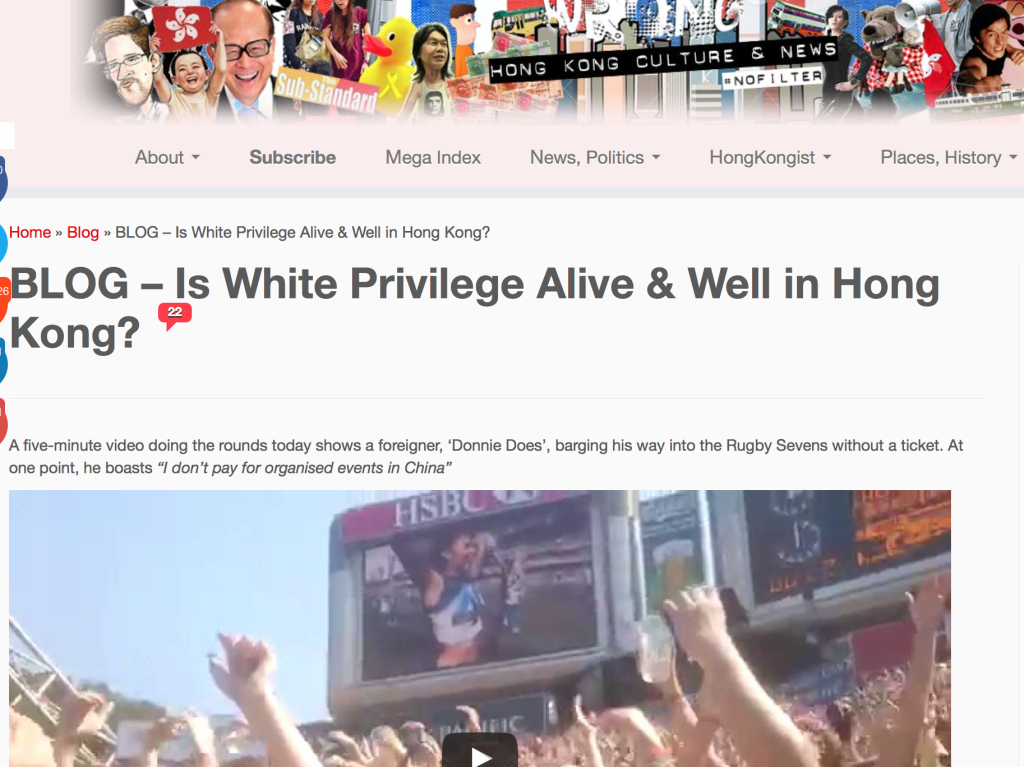 Let me settle that debate now. Yes. Yes it is. Case closed.

This brings us to this year’s tournament. I arrived with zero intention of pulling any stunts like this. I now have a full-time job and have no problem paying for tickets to sporting events(especially when there is a good chance it will be reimbursed by your employer if you make content while there). I was looking forward to just kicking back in the South Stands with some good friends and a million beers, letting the cameras roll, and seeing what kind of shenanigans I could capture. However, this is where “Connor the Compass” comes into the picture. 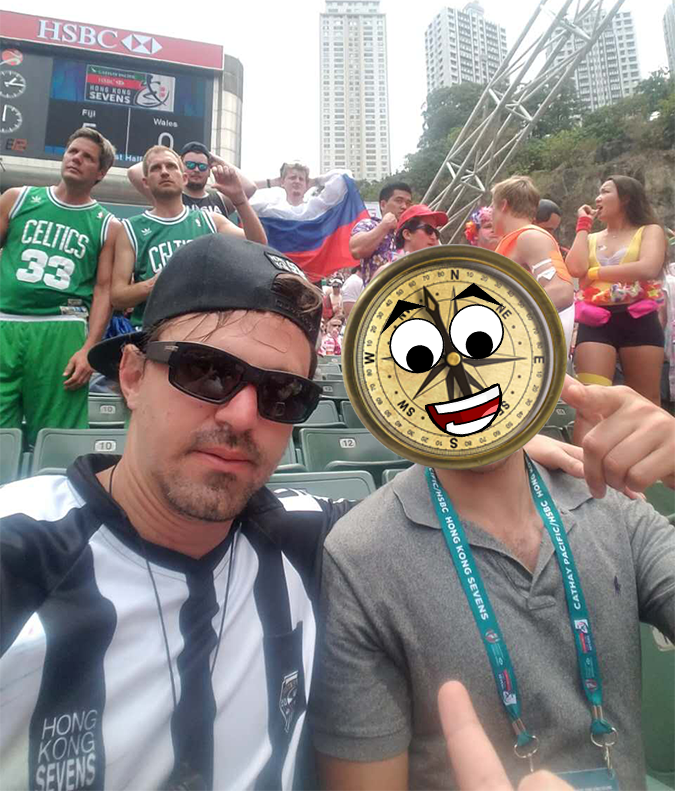 Connor was a fan of my youtube videos who happened to be in Hong Kong for the weekend to cover 7s for another media company. We decided to meet up for some drinks Friday night before the event and I gotta say my first impressions were a little hesitant.

However, all my doubts were thrown out the window when I learned he grew up on a cattle ranch in Texas and didn’t have the internet until 2009. In that case, I’d be disappointed if he didn’t break out a compass to help us find a bar. (side note: the compass didn’t actually help us find the bar, I had to ask for directions). He ended up being a great guy though and we parted ways planning to meet up at some point in the South Stands on Saturday. Well folks, I think must Connor must have felt bad that he had a media pass to the event and I didn’t because later that night he sent me this photo. 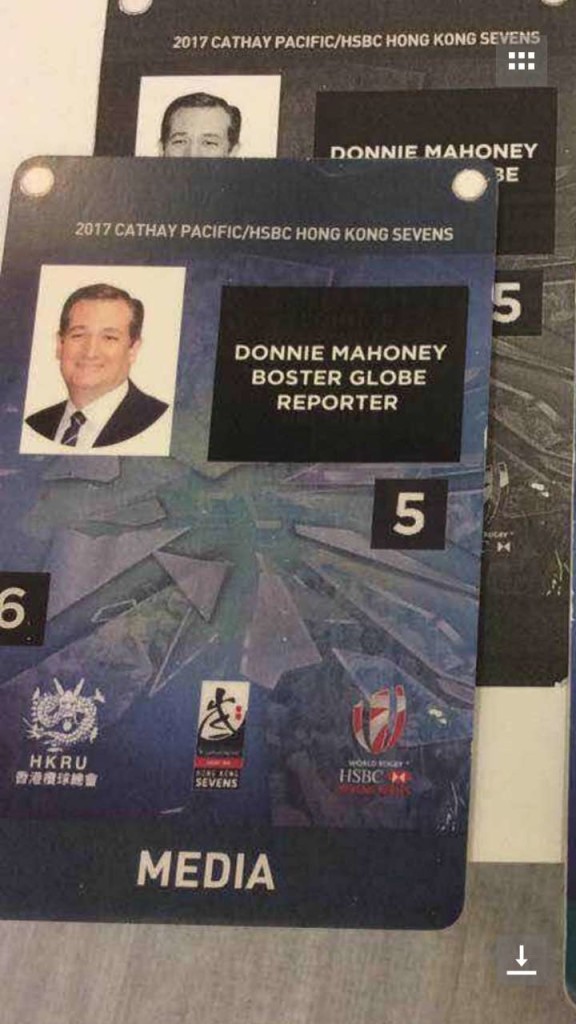 and this was the text exchange that followed… 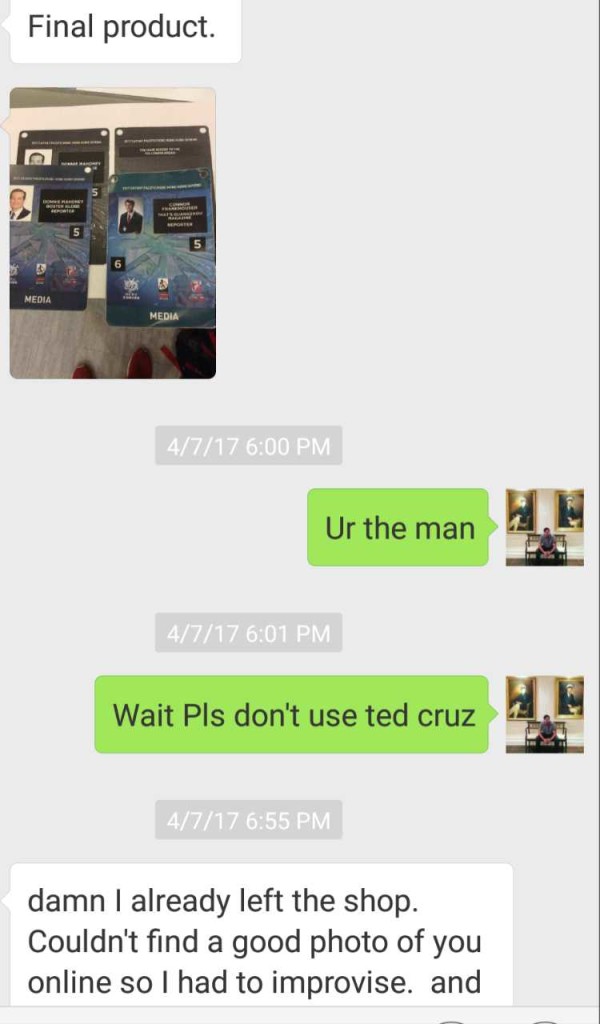 Putting Ted Cruz’s photo on my fake media pass is one of the most outrageous moves I’ve ever seen. I mean I know he’s not exactly an A-list celebrity but the dude has one unforgettable mug and has been the center of some of the greatest memes of the last year (thanks to me).

But honestly, I’ve done stupider things before and things have turned out alright so we decided on this plan. On Saturday I’d go to the South Stands as just a normal spectator to make sure I at least got some solid footage from the weekend. Then on Sunday I’d give the fake media pass a whirl.

Well Sunday rolls around (after getting some solid footage of the South Stands on Saturday, video later this week), and Connor meets me outside the stadium with my shiny new Ted Cruz media pass. Keep in mind I still haven’t recovered from Saturday at this point. I’m greasy, sweaty, and fresh from puking in a shopping mall restroom. None of that matters tho as I’m able to walk straight into the stadium onto the pitch with just a quick flash of the media pass and nod to all of the security guards I pass. Mission Accomplished!

After surveying the grounds I decided to do what any red blooded American Journo would do in my situation and headed over to the Russian team’s bench to talk some shit.

This is the look of a man who has scored way too many rugby tries(touch downs in rugby) to be getting heckled by a drunk American sideline reporter. 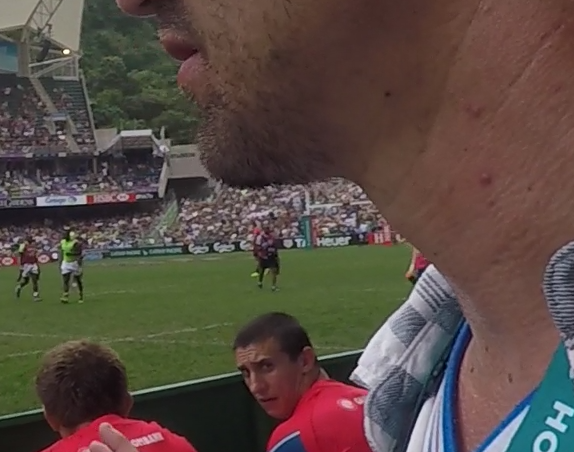 I also spent some time pumping up the Fiji fans, who were my pick to win the whole tournament. (spoiler alert: they did).

At one point a member of the event staff asked to take a closer look at my pass and I thought for sure the jig was up. However, after examining it he just went “okay, thank you” and let me carry on.

Come to think of it that has to be the meanest thing someone has ever done to me. Taken a look at Ted Cruz, then taken a look at me, and been like, “yep, same person.” Luckily, my self-esteem got a little boost about 20 minutes later, when an older employee came up to me, took one look at my pass, and shredded it into 5 pieces. Luckily, all he did was have a security guard escort me off the premises who told me to “Leave and Never Come Back!” Imagine how security at a sporting event in the US would handle a situation like this? It would be a completely different story. I mean the Pardon My Take guys were detained in a back room for hours and threatened with felonies for sneaking into a Beauty Pageant for Dogs. Thank god for Asia.

All in all I would call the day a success, especially seeing how within 20 minutes of being kicked out of the event, I had bought a ticket and was back in the South Stands with plenty of time to see my Fiji guys bring home the Gold. #GoFijiGo

Be on the lookout for some video recaps of my HK 7s experience later this week.