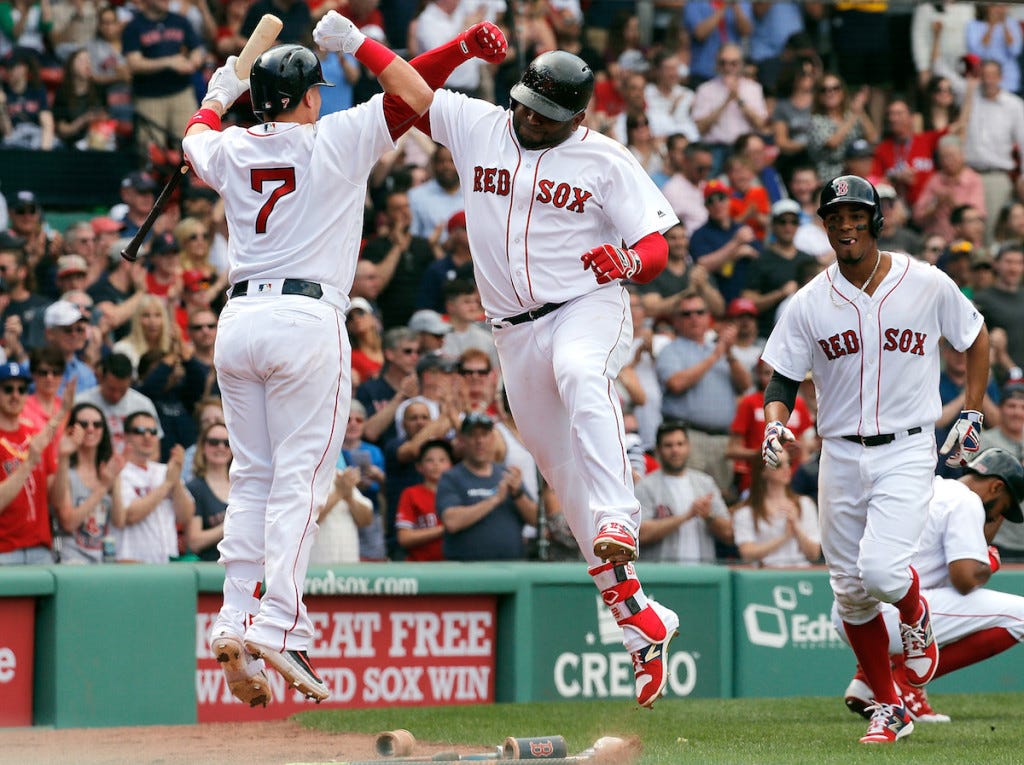 Looking to build off of a solid season debut this past Tuesday, Drew Pomeranz sort of did that, but sort of didn’t do that at the same time on Sunday. It was a very weird outing.

His day started off by walking the first two batters that he faced, which is obviously on him, but those runs eventually came in to score on a ball that I thought Andrew Benintendi probably should’ve had. I think we can all agree that Jackie Bradley Jr. more than likely catches that ball and that Benintendi’s unfamiliarity with playing centerfield at Fenway Park likely factored in to that ball not getting caught.

Pomeranz allowed a third run in the first inning on a passed ball by Christian Vazquez, but he also struck out the side, which was more or less his day in a nutshell. The Red Sox were able to grab two runs back in the bottom half after back-to-back doubles by Benintendi and Mookie Betts, and added a second run later in the inning on an RBI base knock by Mitch Moreland. Those guys weren’t done doing their damage for the day, though.

In the fourth inning, Pomeranz served up a solo shot to Corey Dickerson to make it a 4-2 ballgame in favor of the Rays, but, again, the Red Sox answered back in the bottom half when Pablo Sandoval hit a game-tying two-run shot. The dude’s hitting .143 with a .577 OPS, which are both the lowest marks for a Red Sox starter, but he still leads the team with three homers and 9 RBI. Also worth noting that two of Sandoval’s three homers have either tied the game or given the Red Sox the lead.

Pomeranz failed to keep the game tied, allowing a solo homer to Tim Beckham to lead off the top of the fifth. Two batters later, and Pomeranz’s day was over. He ended up striking out 10 Rays, but allowed five earned runs and walked a couple guys in the process. The 10 strikeouts was a pleasant surprise, but 103 pitches to get just four and a third innings is vintage Pomeranz.

We’ve seen two starts from him this year — one good, one meh — so let’s not get too high on the good and too low on the meh, but this most recent start, I think, is what Red Sox fans have come to expect from him. Maybe not the five earned runs part, but definitely the failing to go deep into his start part. Since being acquired by the Red Sox last July, Pomeranz has made 15 starts for Boston and failed to go at least 6 innings in nine of them. For all my math people out there, that means that he’s given the Red Sox less than 6 innings in 60% of his starts since being acquired. That’s trash.

Trailing by a run in the bottom of the seventh, the Red Sox loaded the bases for Moreland, who’s been red hot since his 0-for-12 start to the season. The guy whose signing with Boston as a free agent drummed up little to no excitement among the fan base has been arguably their best hitter thus far. The 31-year-old followed up his three-hit night on Saturday with two more hits on Sunday with his second hit being the game-winner, a two-run single to left field.

With two more hits today, Moreland has 16 hits in his last 33 at-bats, good for a .485 average, and 10 of those 16 hits have gone for extra bases. Going down the line here, Benintendi was one of three Red Sox hitters to have a three-hit game on Sunday, raising his average from .238 to .277. Mookie had three hits in this one and seven hits in his last three games. He’s up over .300 for the first time since Opening Day (.306). In the nine-hole, Christian Vazquez went 3-for-4, which means he’s off to an 8-for-12 start to the season. The competition behind the plate is heating up big time right now between Vazquez and Sandy Leon.

Don’t look now, but Craig Kimbrel has actually put together back-to-back clean innings to rack up his third and fourth saves of the year. I’m sure it doesn’t feel like it to Red Sox fans, given how much of a heart attack closer he can be, but he’s actually converted 24 consecutive saves dating back to last year. That’s the second longest active streak in the majors. This will probably come as a surprise too, but out of his five appearances this season, he’s only walked a batter in one of them. I guess if you freak Red Sox Nation out once, that’s just going to be your reputation moving forward, because all things considered, Kimbrel has gotten the job done far more often than he hasn’t since he’s been in Boston (at least, in save situations).

Couple quick notes — This was the 500th win for John Farrell as a manager. Congrats to Johnny Steelcock on the milestone. Also, Hanley Ramirez was lifted from this game with a left hamstring cramp, but he said, “I’ll be fine, I’ll be in there tomorrow.” He’s in the lineup today.