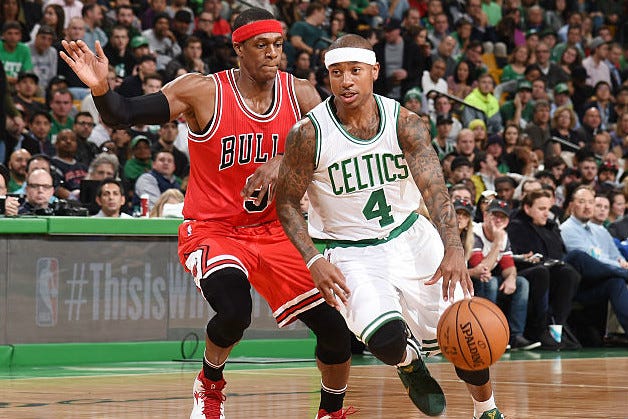 Some people are using today to celebrate the return of Jesus. In my house, we are using it to celebrate the return of Celtics playoff basketball. A long 6 months in the making, we finally get to see what this team can do now that the games actually matter. Obviously everything that happened with Isaiah yesterday is a factor to some extent, and as I write this I have no idea if he’s playing or not. Regardless, this should still be a series the Celtics are able to win, and there are a few things they are going to have to make sure to do in order to not make me and a bunch of other loyal Kool Aid drinkers look foolish for believing in this team. 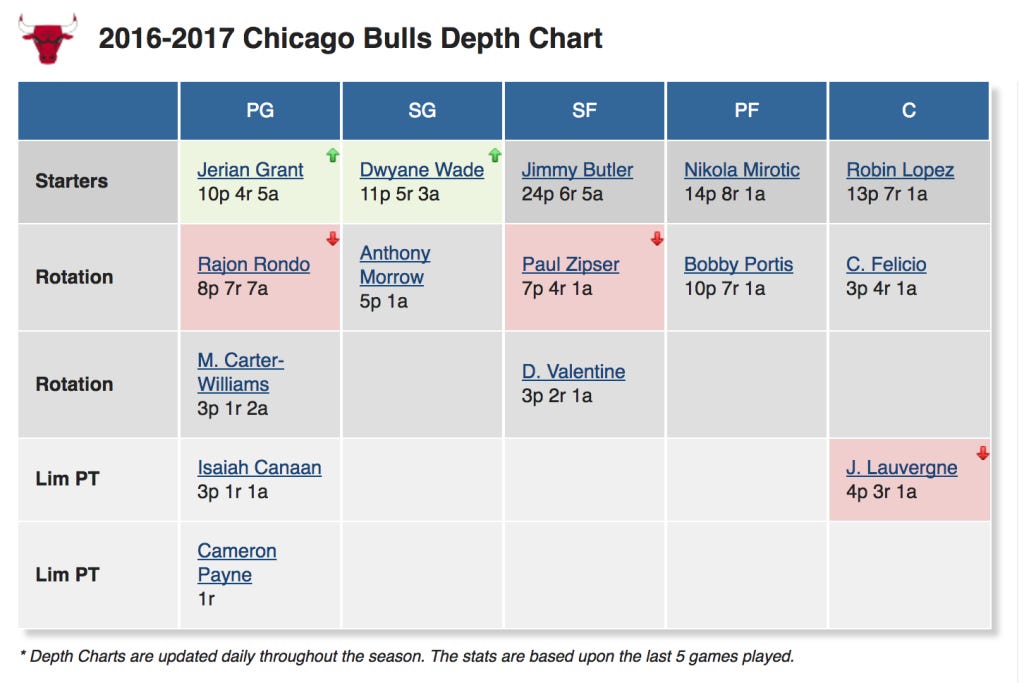 Not exactly the 1995-96 Bulls. One thing is for certain, the Bulls DO have the best two way player in Jimmy Butler, but nothing else keeps me up at night. Here’s what we also know. We know Mirotic is a shooter, who since around mid March has shot the ball at a pretty good clip. He’s played in two of the four games this season against the Celtics (missed the last two) and averaged 16 points on 50% shooting. Now these two games came within the first week or so of the season, when the Celtics defense was anything but respectable. The point is, the Bulls are going to need secondary scoring, and if the plan is to just back off Rondo and Wade and make them prove they can hit a jumper, that same sort of approach will most not likely work on Mirotic.

Horford is going to make to make sure he doesn’t lose sight of Mirotic in transition, or get caught sagging too far down in half court sets. This is why I think we’ll see Brad change up his lineup at times, moving Horford to the five and having a more athletic four, whether its Jae, or Jerebko, shit even Olynyk because I’m not sure Horford has the lateral quickness to stay with Mirotic off the dribble.

Now stopping Jimmy Butler, that’s an entirely different animal, and one that the Celts have had a decent time containing. This season his 20/6.8/3.8 has come with 36/50% splits, and his offensive rating of 117 is the third lowest against any current playoff team in the East. Much like DeRozan, Butler LOVES to get into the midrange. This season he took 474 FGA from the midrange, by far his most FGA, and he shot 38.4%. While it may seem like playing with fire, I would tell the Celtics to play to this shot, because they have shown to defend it pretty well. This year against the Celts, Butler is shooting just 25% from midrange.

What you have to prevent is him getting all the way to the rim. When Butler gets easy buckets early, just like with any All Star player, things only get tougher. Fortunately, when you look at the Celtics roster they DO have the right type of bodies to though at Butler. Avery, Marcus, Jae, shit even Jaylen in desperation can help challenge shots and make things tough.

For me personally, getting past CHI doesn’t have that much to do with shutting down Butler, or Wade, or anything like that. For me, it all comes down to the rebounding. One thing is certain, I am over the moon that the Bulls no longer have Taj Gibson. I’ve had enough of the fact that anytime Taj Gibson played the Celtics, he absolutely destroyed them on both the offensive and defensive glass. I will not miss that 12/9/3 one bit.

The numbers are a bit concerning. The Bulls ranked 3rd in the league in REB, and 2nd in OREB. I don’t know if you’ve heard, but the Celtics are perhaps the worst rebounding team this century. Here’s what we also know though, in the last win over CHI (in other words against THIS roster) the Celtics owned the glass, so it can be done. This is going to be a series were all five guys are going to have to rebound. Guards like Marcus and Avery are going to have to help out, and Horford cannot disappear under any circumstances. If Robin Lopez eats them alive there will be hell to pay.

I will say this, since the ASB, the Bulls have dipped a little bit not only in their rebounding numbers, but their opponents numbers as well. While still an issue, it’s not like it was pre Gibson trade that’s for sure.

Now in terms of the Celtics, so much has been made about the fact that Jimmy Butler is going to shut down Isaiah Thomas.

Well it hasn’t happened yet. If you still don’t believe in Isaiah’s offense after everything he’s shown not only against this team, but against every team, then I don’t know what to tell you. The offense of Isaiah Thomas is of my least concerns in regards to this offense.

Now to make sure he succeeds, we are going to have to see the Celts do what works. Give him high screens, be available for a swing pass if CHI doubles, and more importantly, his teammates need to knock down shots. If the Bulls can’t cheat of their man help on Isaiah, he is going to feast.

On the offensive end, there so simply so many mismatches for the Celtics if Butler is going to be on Isaiah. I’ll take my chances that Wade won’t be able to keep up with Avery coming off a billion screens, and I don’t think Grant has the size to match Jae if he chooses to go to the block. I’d love to see the Celts run a lot of their offensive sets through Horford, maybe a few possessions where Isaiah is off the ball, if only because when they do that the ball moves, and the spacing plays a crucial factor. If the Celtics stand around and hold the ball, the Bulls half court defense is too good for that to work consistently.

On the season the Bulls defense has been pretty good, it’s top 10 in a lot of key defensive areas, which means this it shouldn’t be shocking if this is a close game. If that’s the case, I say advantage Celtics and here’s why

I think we all also agree that the second unit is going to be crucial. Can Olynyk/Smart/Jaylen/Jerebko not completely shit their pants and lose the game. Too many time we’ve seen the starters play great, only to see the second unit fuck everything up in that second quarter. Shorter rotations should help, but the Celts cannot afford to have something terrible like a 2-15 performance from their bench. ESPECIALLY if Isaiah doesn’t play.

No matter what happens, this is going to be an emotional game, and emotional series. NBA talking heads are already saying how this is the series that could be the upset of the playoffs, and frankly that is downright disrespectful. It won’t be easy, they are going to have to play a full 48 minute game in order to win, but the Celts have the formula for advancing past this round.

As a Rondo guy this pains me because I know there will be a Playoff Rondo game and I fucking loved Playoff Rondo. At the same time, fuck Dwyane Wade now and always.