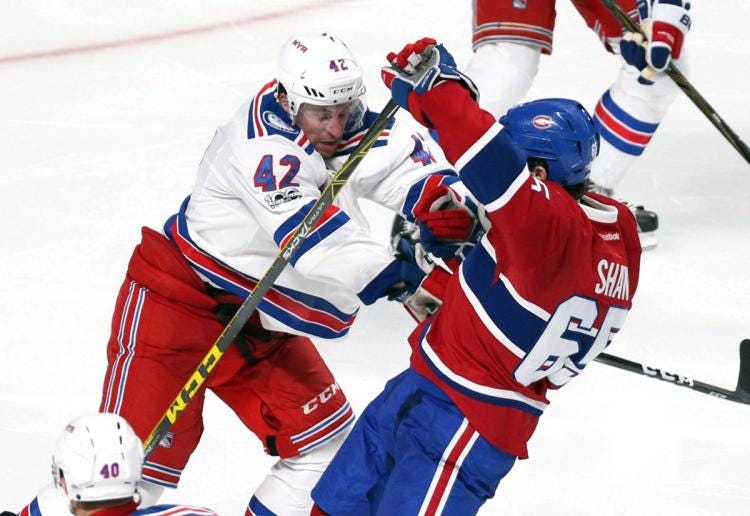 That’s all the Rangers needed to hold on for to return to MSG up 2-0 & skate with a little less pressure in their own building. Instead, despite stealing a road game which is still a positive, NY has to worry about not only fending off the relentless Habs but a relentless recent history on home ice. It’s been far from an advantage. Prior to a pair of meaningless April W’s, the Blueshirts had gone winless in 8 straight at the Garden to finish the regular season as the worst Eastern home team. They dropped both NY games in last year’s series with the Pens and, in 2015, lost their last three home tilts to Tampa Bay. The Garden crowd has seen their squad score just once in 4 playoff contests. Ouch.

Tonight is a gut check moment. If this Rangers team plans on playing more than a round they’ll have to give Montreal a taste of their own medicine. Gaffes gave the Habs opportunities but they also forced the issue with countless chances inside the dots. Only Lundqvist’s 54-save performance kept the game from ending a lot sooner than it did as his teammates could barely muster half as much pressure on Carey Price for the third & OT. There’s plenty of forwards that have been real quiet so far who simply need to wake up & the top 3 guys on my list all man the middle. I’m not as worried about Stepan as he’s proven himself in big spots before – but DJ ZBad & Hayes look like boys against men.

The biggest positive from Game 2 was the play of Smith & Skjei. They were by far and away the most noticeable pairing on the ice yet AV refused to deploy them when it mattered most. I tend to avoid giving too much credit or blame to coaches, but that’s inexcusable. Skjei has been McDonagh-lite for all of 2017 & Smith may very well have been the Rangers best blueliner Friday night. The inability to recognize that & trust them over the Holden/Staal tandem is a mistake Vigneault paid for dearly. Enough with Holden. At least if Klein is in the lineup you know he’ll bring more “mean” whenever guys like Gallagher want to tap dance in the crease. Regardless of who plays with Staal though, 76 & 42 HAVE TO get more minutes. There’s nothing to support otherwise.

The first two games of this series have been outstanding. Stellar goaltending, hits galore & a level of hatred on both sides that’s only gonna get worse. Amongst all the entertainment the Blueshirts gotta dig deep in front of a home crowd & tilt the scale right back. Exciting games are cool. Wins are cooler. So come on, Rangers. Let’s make like Jesus & rise to an occasion.