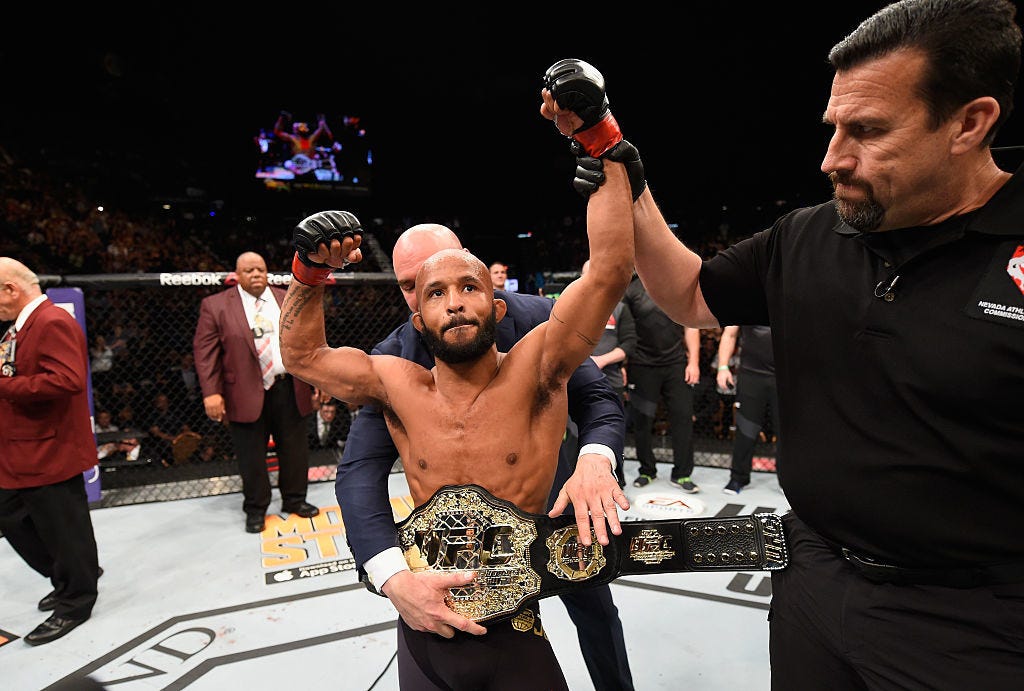 That’s what you call clickbait, ladies and gentlemen. I didn’t tell you which impressive record may be tied tonight, so you clicked. Got em!!!!

Tonight on FOX, Demetrious Johnson will attempt to tie the record for most consecutive title defenses. The record currently sits at ten, and it’s one of the most prestigious records in the sport’s history, for good reason. Anderson Silva’s ten defenses were against the following opponents:

While Might Mouse’s opponents are nowhere near the contenders that those men were, they’re also not all pushovers:

Tonight he will stand across the cage from Wilson Reis, the #3 ranked flyweight contender in the world. I hate to write people off in this sport, especially if they are as talented and gifted as Reis, but Mighty Mouse is the closest thing to unbeatable the UFC has seen in quite some time…at flyweight. It’s getting to the point where it’s hard to find worthy contenders for the title, because he’s run through them all. I mean, Tim Elliott was literally the winner of the last Ultimate Fighter, and was fighting for the title in his first UFC bout. The flyweight division has been stretched thin, and I’m starting to wonder how much longer it will exist before Dana decides to make them all bump up 10lbs. Personally, I hope that never happens, because I’m a HUGE fan of Mighty Mouse and the greatness he displays at 125, and I love the division in general, but the public doesn’t.

I hope they don’t discount how awe-inspiring this accomplishment is, because looking at the other UFC champions’ defenses shows why Mighty Mouse is the #1 pound for pound fighter in the world.

My other predictions for tonight’s fantastic card include:

-Rose Namajunas (this one was tough because I love both fighters, but think Rose’s quality of competition will prove her to be the better fighter)