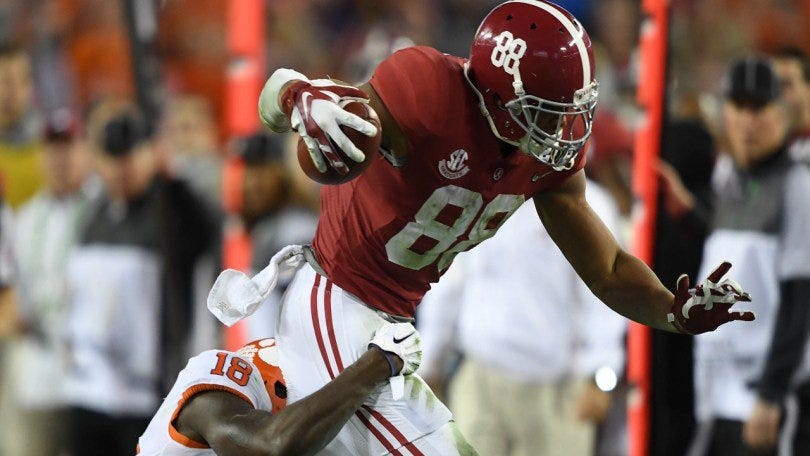 Writer’s Note: This is the third in a series and I’ll do as many positions as I can before the draft at the end of the month. As I mentioned before, I don’t try to pretend to know what order guys are going to be drafted. I only know what’s in Bill Belichick’s heart and have predicted at least a half a dozen of his picks over the years. But with the Patriots not having a pick in the top 70, instead of doing a Patriots-centric preview like I’ve done in the past, here’s more of an overview and I’ll be The Belichick Whisperer at the end. Today, it’s the tight ends.

Tight end is fast becoming one of the hardest spots to scout as the former power position mighty morphins into more of the hybrid, big wide receiver role. At the college and pro level. We’re now seeing the former traditional, inline, Y-receiver line up as the X-receiver split off the formation on the side away from trip sets in 3X1 alignments on the regular, something that was almost unheard of even six or eight years ago. It’s why the Dolphins picked up Julius Thomas. But regardless of where they put tight ends now, the job is the same as it always was: Be too big and physical for defensive backs to stop you and too athletic for linebackers. And still be able to block on the edge when duty calls.

With that in mind, this is expected to be an A-grade class. And the NFL needs it to be. It’s been a down period for young tight ends coming into the league, with busts like Jace Amaro and last year’s draft that didn’t see a tight end come off the board until Hunter Henry in the second round. This class might have as many as three in the first round. As far as the Patriots? They’re looking. They always are. Most teams draft about 2 ½ wide receivers for every tight end they take. Which makes sense, when you think about the formations they use. In 17 drafts under Belichick, they’ve taken 14 WRs, many in Round 5 or later, to 10 TEs, three of those in the top 42. Tight end is simply a bigger priority for the McOffense than any other in the league. Plus factor in Gronk’s injury history and I think it’s one of their biggest needs.

Compares to the active ingredients in: Eric Ebron
Just from a physical standpoint, Howard is the specimen you’d save on your phone so you could show him to the guy at the Tight End Shop and say “I want mine to look like this.” He’s got all the tools. He’s a traditional Y-tight end who can also align at X. He’s a fluid runner. He’s an excellent “hands” catcher. The big play ability is there as he led the Tide with 19.2 yards per catch as a freshman. He runs like a wide receiver when the ball is in the air. And linebackers who are assigned to cover him should fake their own death. Everything is there with this guy, except the actual production. Aside from an outstanding game against Clemson, his numbers are just not there. Whether that’s because Lane Kiffin underutilized him or he doesn’t play to his ability is part of what makes projecting this position so hard now. But regardless, he’s coming off the board first, and it will happen in the top half of the round Thursday night.

The Other First Rounder:

David Njoku, Miami. 6-4, 246 lb, 4.64.
Compares to the active ingredients in: Vernon Davis
Njoku is the latest model off the U’s tight end assembly line after Jeremy Shockey, Greg Olsen, Kevin Everett and Kellen Winslow, Jr. He played a lot on the line of scrimmage but can line up anywhere. He’s athletic as hell, though less of a finished product than Howard. He’ll finish blocks but also run quality routes with a good change of direction and get in and out of breaks without losing speed. His biggest downside is his hands, since he dropped balls at an 11% clip. Which in tight end speak is the equivalent of finding the perfect house were it not for that Indian burial ground under the foundation. He’ll still be a first-to-early second round pick. I just remember Ben Watson looked like the perfect tight end too, until he showed the hands the old Weymouth High coach used to call “Pizza Paddles.”

The Smaller, Hybrid-Receiver Types:
(Note: For the purposes of this, I’m only going to compare these newer breed of TEs who play more detached from the formation to guys who aren’t sitting in an orange jumpsuit for going all Shooty McMurder on everybody. Thanks for understanding.)

Gerald Everett, South Alabama. 6-3, 239 lb, 4.62
Compares to the active ingredients in: Delanie Walker
Like a lot of tight ends, he’s a converted basketball player. He lined up everywhere, though rarely next to the tackle. He’s a superior, controlled athlete who posted a 3-cone drill time under 7-seconds and had 22 reps on the bench press at the Indianapolis Dog Show. He can run after the catch, with a great instinct for setting up his blocks on screens. If there’s a physical knock on him it’s that he’s got really long arms for a guy his size but tiny 8 1/2-inch hands, like a 6-foot, 3-inch Dooneese.

Evan Engram, Ole Miss. 6-3, 234 lb, 4.42
Compares to the active ingredients in: Jordan Reed
He’s another tweener who can block some, but not as a drive blocker and will mainly flex out or play the slot to do damage playing in space. He’s also a special receiver with a big catch radius who plays to a pretty impressive 40-time. Unlike a lot of guys on this list, he was utilized at Mississippi, with 65 catches for 926 yards and 8 TDs, good enough to have “All-SEC/All American” written in Sharpie on the side of his coffee cup. He was twice a team captain who seems to have the best intangibles in the group. He might fall to the last 2nd or 3rd round, and could be an absolute heist if he does.

Compares to the active ingredients in: Jimmy Graham
You look at this guy and he seems like a prototype, old school, inline Y-tight end. But one pundit I listened to said he watched tons of tape on Hodges and never once did he line up on the LOS. But he runs routes like a wideout, making him a matchup nightmare. He’s a coverted QB, which gives him a great understanding of route concepts in a pro-style offense and still has three years experience at this position. Just to find a flaw, his arms are only 32 ½ inches long, which seems awfully short for such a big guy. But if you don’t have concerns about a guy who buys his shirts off the irregular rack at TJ Maxx and hasn’t played on the line, here’s your man.

Jeremy Sprinkle, Arkansas. 6-5, 252 lb, 4.64
Compares to the active ingredients in: Larry Donnell
Sprinkle made a name for himself at the 2016 Belk Bowl when all the player were given $450 gift cards at a Belk store when he managed to get more merchandise than his card covered, through a discount purchasing technique commonly referred to as “shoplifting.” But look past that (altogether now) … mistake, and you’ll see a 4-year player and probably the best blocker in this group. He’s not huge but he’s good sized. In the receiving game he tends to have long strides which is fine on the third level but not such a great thing on intermediate routes. He tends to fight the ball on catches, but doesn’t drop many. Of course, he’d be drafted higher if he’d dropped the merchandise before trying to leave the store.

Too Big to Fail:

Compares to the active ingredients in: Vance McDonald
McDonald is the closest comparison you can make, and yet Shaheen still has him by 11 pounds. Shaheen’s another converted power forward. And even though he’s got the body of a tackle, was moved out to the slot and the boundary to create iso’s. Particularly in the red zone where he made a lot of scoring plays on fade routes. He needs refinement to his game, as he got by in college on his massive physical advantage. At least one scout I heard about sees him as a 10-year pro. I see him as the tight end I most want to have as my champion in a Trial by Combat.

Michael Roberts, Toledo. 6-4, 270 lb, 4.86
Compares to the active ingredients in: Kyle Brady
Brady to me will always be the Patron Saint of Block-First Tight Ends. That hand -the-synthetic-grass, road grading, edge-setter. And that’s what Roberts brings to this group. He can catch the occasional pass and is a good red zone threat, with his size and ridiculously big 11.6-inch Wreck-It Ralph hands. Still he’s dropped some balls at the Senior Bowl but otherwise had an impressive week.

A Red Flag That Might Be a False Flag:

Jonnu Smith, Florida International. 6-2, 245 lb, 4.62
Compares to the active ingredients in: Charles Clay
Smith became semi-famous in a bad way when his pregnant girlfriend dumped boiling water on him because he wasn’t spending enough time with her. You can question the judgment of trying to win someone’s companionship with scalding hot liquid agony, but apparently not Smith’s attitude. He was a team captain at FIU, with a reputation for being driven and hard working, with a lot of compete on 50/50 balls. In school he lined up primarily in tight, the slot or on the wing, but not out wide. He’s got a chisled physique, but there’s concern he might have maxxed it out.

A Winner With Maybe Questionable Make Up:

Jordan Leggett, Clemson. 6-6 258 lb, 4.73
Leggett is athletic for his size. He produced for the national champs to the tune of 48 catches for 691 yards and 7 TDs. But for a guy as big as him he doesn’t show any want-to in the blocking game.

Compares to the active ingredients in: Zach Miller
Obviously O.J. Howard projects as the ideal anybody, but he’s going to a team with the luxury of a high pick. For a team sitting in the 3rd Round hoping someone falls into their lap, Butt is a quality – and realistic – option. He’s more solid than spectacular. Does everything well but not so well that your eyes pop out of your head in Roger Rabbit-like fashion. He’s not so athletic that he runs by people to get open, but he’s smart when it comes to hand fighting and knows how to stay just on the side of the offensive pass interference line without drawing flags. He’s the best route runner in this class. He contributed on the kick off team. And he was a captain at Michigan, which fits the Patriots mold of building a locker room full of leaders. More to the point, he’d be a 2nd Round selection at the very least were it not for the fact he tore his ACL in the Citrus Bowl (Christian McCaffrey folds his arms, slowly nods his head) and could miss significant time in his rookie year, which will scare teams away. With Dwayne Allen on the roster and the Pats stacked with pass catchers, it seems like the perfect Pats move to buy low on guy who projects to be a really solid pro from 2018 on. I like Jake Butt and I cannot lie.