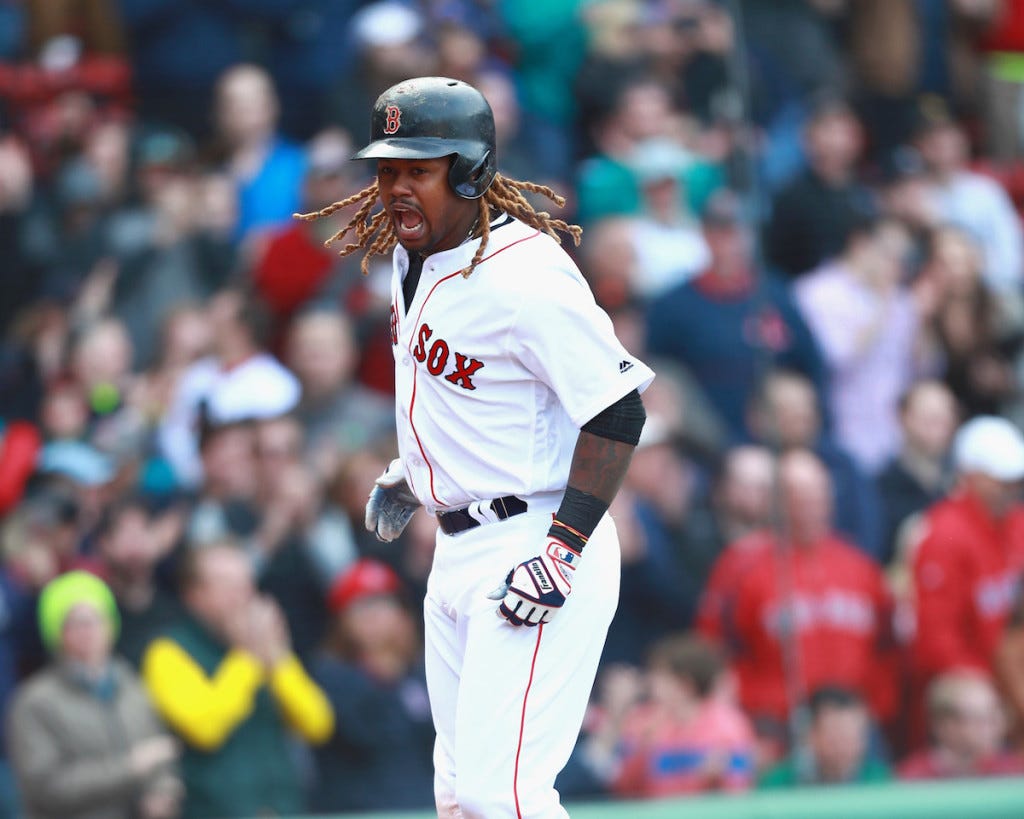 It was weird to see the Pittsburgh Pirates come back to Fenway Park for a second time this season, especially in such a short span, but they had to wrap up the season-opening series that saw the finale rained out and rescheduled as a day game yesterday.

As David Price continues his path back to a major league mound, all eyes have been on Red Sox starters not named Chris Sale and Rick Porcello. Drew Pomeranz looked great on Tuesday, Steven Wright got absolutely rocked for eight earned runs and four homers on Wednesday, and then it was Eduardo Rodriguez’s turn, who has historically pitched poorly in day games.

Three batters into the game, and it was already 2-0 in favor of the Pirates. Walk, strikeout, two-run home run by Andrew McCutchen. It looked like it was going to be yet another stinker for Rodriguez in a day game, but after that bomb by McCutchen, that was really it. Pittsburgh grabbed another run off of him in the sixth, but it was unearned. Rodriguez ended up striking out eight, but the four walks you hate to see.

You get five and a third innings from Rodriguez, get away with only the two earned runs that were allowed three batters into the game, and you should feel pretty good about that, right? And honestly, I do. I definitely think it’s a big step in the right direction for a guy who’s had injury issues, pitch-tipping issues, and the weird ass day/night split issue. But I’m noticing that there’s one issue that still exists when it comes to Rodriguez, and that’s the fact that he’s still very much a two-pitch pitcher.

Rodriguez threw 107 pitches on Thursday, 80 of which were fastballs, 23 changeups and just four sliders. Four! The strangest part about that is that all four sliders were strikes and he didn’t allow a hit on any of them. I don’t know why he shies away from his slider so much. As a starting pitcher in the American League East, you’re not going to get away with being a fastball/changeup pitcher for very long. This was an issue last year, too. Something to keep an eye on, for sure.

Offensively, all the Red Sox could muster prior to the eighth inning was one run when Mitchy Two Bags Moreland scored from second on a Marco Hernandez double. Moreland was standing on second, because he doubled in his seventh consecutive game, which is a Red Sox franchise record and ties the American League record that he now holds with five others. After opening the season 0-for-12 with 6 strikeouts, Moreland is 11-for-25 (.440) with a major league leading 8 doubles and a 1.293 OPS.

Trailing 3-1 in the bottom of the 8th, Hanley Ramirez came to the plate with the bases loaded and smashed a 96 MPH fastball out towards the triangle to drive in two runs to tie the game. Also, props to hustling over to third base on that play. Hanley doesn’t get enough credit for his aggressiveness on the base paths.

Two batters later, Xander Bogaerts poked a base hit into right field to drive in the go-ahead and eventual game-winning run, which was Hanley. So, again, props to him for being there in the first place, because I don’t think anyone would’ve batted an eye if he had stayed at second base with a game-tying double.

We’re two weeks into the season and that’s already Boston’s second come from behind win. Really, it could’ve been their third if the bullpen had held onto that lead in Detroit when Pablo Sandoval hit that go-ahead three-run homer last Friday.

Speaking of Sandoval, John Farrell already gave him a day off because he feels like he’s pressing too hard, hence the Hernandez start. He’s got two homers, and one of them was that clutch homer in Detroit, but overall he’s hitting .133 with a .573 OPS and 9 strikeouts in 30 at-bats. He’s basically striking out a third of the time. I complain every time he comes to the plate as a right-handed hitter against left-handed pitching (0-for-9 this year), but he’s quickly approaching a point where fans will complain any time he comes to the plate at all.