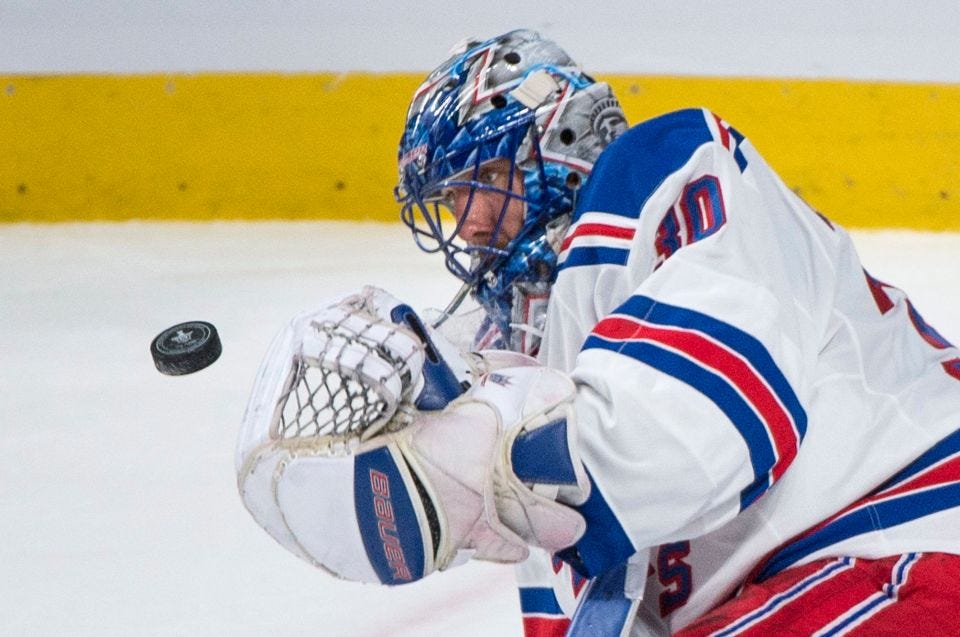 If recent history is any indicator, tonight’s game most likely won’t end well for the Blueshirts. In 4 straight playoff series & 6 of their last 8 New York has split the first two contests. There’s some silver lining in there though. Only once did they win both – the 2014 Eastern Conference Final. At the Bell Centre.

The Rangers look to repeat that tonight following Henrik Lundqvist’s shutout effort in the opener. For all the talk of how the Bell Centre was a “house of horrors” for Hank, his postseason numbers tell a different story. He’s 5-1 with a 1.82/.935 line & a pair of goose eggs in 7 playoff starts vs the Habs. Under their roof, NY has won 3 of 4 with The King manning the crease. Lundqvist set a pretty high bar Wednesday night with a vintage effort & made one thing clear – he’s just fine on enemy ice in Montreal.

Pressure on the Canadiens should be ramped up tonight, so the Rangers are gonna have to stay disciplined. Absorb those hits while winning 50/50 battles like they did to take Game 1 & refrain from taking the bait Gallagher, Shaw & Ott are sure to dangle again. Gallagher racked up 3 minors, Shaw threw a choke hold on Smith & bloodied Skjei and Ott hammered the crease & tried to get under Hank’s skin with a little post-whistle water bottle hijinx. Obviously I’m not saying to be pushovers – just avoid retaliatory freebies.

One of the things I mentioned in my preview was how the Blueshirts needed to take advantage of the Habs third D pairing (Beaulieu/Nesterov) & they did just that, controlling possession almost 2-to-1 when they were on the ice. With Emelin most likely absent again from their top 4, NY will need to duplicate that effort. On the other side, the Skjei/Smith pairing had more combined SOG & hits than the top two Rangers pairs despite less minutes. Would love to see them take a few shifts away from Holden/Staal tonight.

Not the greatest showing out of Hayes & JT who many pegged as difference-makers this series. Both got top-5 forward minutes but couldn’t muster much in the offensive zone. Granted no one in the top 6 showed up on the scoresheet either but, at least to the naked eye, they were a little better. For as fun as Tanner Glass’ backhand snipe was, I don’t think there’s any more of those coming. If NY wants to put the Habs in an early stranglehold, their skill will need to solve Price with something other than a fluke.

Worst case, the Rangers did their job & stole a road game – but considering how they struggled at MSG to close the regular season tonight is still a big deal. The Canadiens didn’t pose much of a threat after a rampant first period. If Vigneault’s squad can avoid shooting themselves in the foot defensively we’re in for another coin flip & that’s all you can ask for in a spot like this. It’s up to the Bueshirts strength of balanced scoring to take advantage.