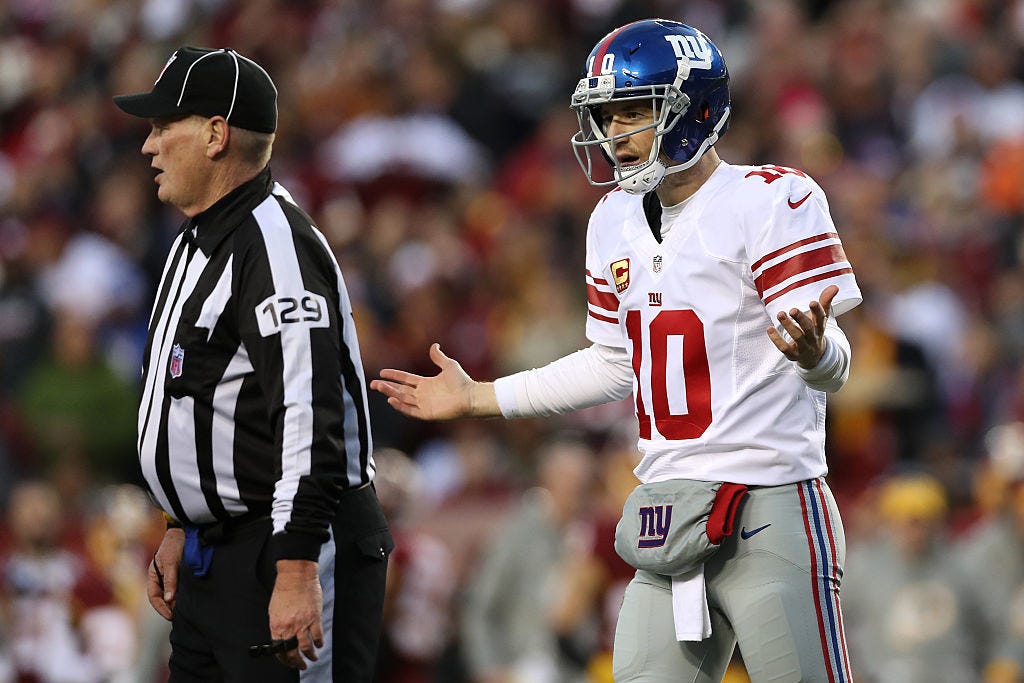 NY Post- Giants quarterback Eli Manning was in on a scheme to sell phony game-worn gear — sending an email asking the team’s equipment manager for “helmets that can pass as game used,” according to blockbuster court papers obtained by The Post. The legal filing also alleges that Big Blue failed to produce the smoking-gun request — sent from Manning’s old-school AOL account to an official NFL account — even though “they claim to have no document destruction policy.” But Manning turned over the incriminating email last week in connection with a civil racketeering suit that accuses him, his team and others of conspiring to fleece collectors of authentic athletic uniforms worn on the playing field.

Manning’s email is contained in a pair of exchanges that allegedly began when his marketing agent, Alan Zucker, asked Manning to supply “2 game used helmets and 2 game used jerseys” as per the two-time Super Bowl MVP’s contract with memorabilia dealer Steiner Sports. Several hours after Zucker sent the request on April 27, 2010, Giants equipment manager Joe Skiba sent Manning an email saying: “Let me know what your looking for I’ll try to get something down for you…,” court papers say. “2 helmets that can pass as game used. That is it. Eli,” Manning allegedly responded from his BlackBerry at 2:08 p.m.

The emails were filed Tuesday in New Jersey’s Bergen County Superior Court by three memorabilia collectors who are suing the Giants, Manning, Skiba, Steiner and others, including team co-owner and CEO John Mara. In related court papers, plaintiffs’ lawyer Brian Brook alleges that the emails prove “Manning was looking to give non-game-used helmets to Steiner to satisfy — fraudulently — his contractual obligation.”

“Since it appears that the Giants failed to preserve any emails between Manning and Joe Skiba, and the Giants are keeping Skiba on the payroll and paying his substantial legal bills, the above email exchange may be the only direct evidence that Manning knowingly gave fraudulent helmets to Steiner for sale to fans,” Brook added.

Listen, I understand how this looks to Giants haters. They are going to say that Eli Manning was willfully part of some huge scheme to rip off fans. However those same haters are the people that have been saying for years that Eli Manning is bumbling fool that can’t tie his own shoes. You can’t have it cut both ways, people. I think it’s clear to everyone without an agenda that Eli was simply trying to act like a pal and a hero to a friend in need. Eli is basically Mike McDermott in Rounders, with Joe Skiba playing Worm. We all have one or more friends that needs a hand in life that we want to help without actually getting dirty. Eli probably heard the timeless “You’ve got mail” voice, saw his buddy was in trouble, and offered to help in as vague a way as possible.

The fact that Eli still used an AOL email account is proof positive he is not a crook. Criminals actually try to hide the dirt. People that have AOL accounts are not even close to being savvy enough to pull off a heist. Eli was clearly just being Eli, as innocent and pure as freshly fallen snow. Don’t believe me, read this statement from the Giants.

In a statement, lawyers for the Giants said: “The email, taken out of context, was shared with the media by an unscrupulous memorabilia dealer and his counsel who for years has been seeking to leverage a big payday.”

“The email predates any litigation, and there was no legal obligation to store it on the Giants server,” the statement added.

“Eli Manning is well known for his integrity and this is just the latest misguided attempt to defame his character.”

You don’t fire off a statement with the word “Unscrupulous” in it unless you mean it. The first words I think of when I hear the name Eli Manning are “Two-time Super Bowl MVP” and “The only man that could beat Tom Brady and Bill Belichick in a Super Bowl”. But after that, the next set of words are “Integrity” and “Character”. Even the plaintiff’s lawyer said in no uncertain terms that Eli is basically as honest as Abe Lincoln and a pillar for the community.

On Thursday, Brook told The Post that the Giants “have not clearly addressed the issue” of the emails between Manning and Skiba that the team didn’t turn over. Brook further alleged that “it appears to be the case that someone at the Giants organization deleted” those emails, as well as another, previously disclosed 2008 exchange.

In those emails, Skiba allegedly admitted to plaintiff Eric Inselberg that Manning had asked him to create “BS” versions of a game-used helmet and jersey because Manning “didnt want to give up the real stuff.” “The first we have since Eric saved it on his AOL account and the second we have since Eli apparently saved it on his AOL account,” Brook said. “I do give Eli and his lawyers credit for not destroying evidence.”

By the way, I neeeeeeeeeeeeeed to find out Eli’s AOL username more than I need air to breathe or snacks to eat. Does it have a 69 at the end? Is there a Z where an S should be? Are there a bunch of x’s? xXxLilE1069xXx is what I’m thinking. For all I know, we may have ventured into a few lesbian chat rooms together back in the day. You know why? Because Eli Manning is just a regular guy like me and you. Sure he also has two Super Bowl rings that happened to come at the expense of the greatest coach + QB combination in NFL history. But he still puts his game used shoes on one foot at a time while playing football for the American working man. Because that’s what he is, and that’s who he cares about.