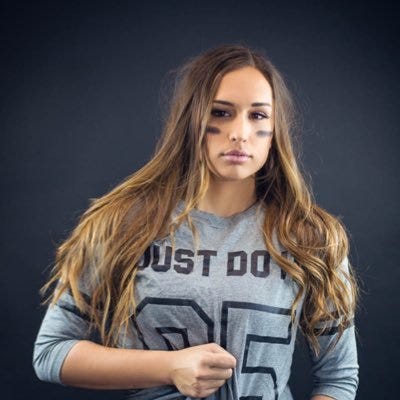 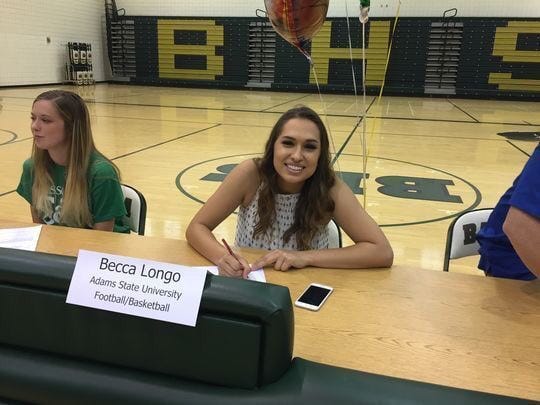 AZ Central – Basha [high school] football coach Gerald Todd introduced Becca Longo during a signing ceremony in school’s gym on Wednesday morning as the first female in the country to sign a college football letter of intent for a program in NCAA Division I or II.

Longo … made 30 of 33 point-after tries and connected on a 30-yard field goal her senior season. “The offensive coordinator (Josh Blankenship), he told me he wanted me to come out for a visit.

“I went on my visit and I absolutely fell in love.”

Adams State is led by former Cardinals quarterback Timm Rosenbach, who is the head coach.

I could take the safe, easy route here. I could ridicule Adams State for a cynical publicity stunt. I could rail against some perceived pussification of football. I could scoff at head coach Timm Rosenbach (on my Fantasy team in 1990, I shit you not) for going along with this. I could demean Becca Longo’s dream of playing college football. But I won’t. There’ll be no ridiculing, railing, scoffing, demeaning or anything else I could find on thesaurus.com. Because I don’t really have an issue with the idea of a 30-for-33 high school kicker playing DII ball just because she doesn’t have man parts.

Of course I mean besides the obvious real world problem of kickoffs. You can’t ask her to cover kicks without being accessories to murder. And telling her not to is basically throwing games. But on a college roster there’s plenty of space for a kickoff specialist or a punter who can handle the duty. So problem solved.

I’ve believed forever that if there was ever going to be a position in sports that would allow a woman to play with the big boys, it would be placekicker or hockey goalie. Yes, I know there’s a physical/strength/toughness element to both. I get it. Spare me your shrill know-it-all lectures in the comments section. But both positions are meritocracies. The kick goes through. The save gets made. If you’ve got the leg or the hand-eye reaction time, you could theoretically do them at a high level. And I semi speak from experience since my town high school boys won the state title with a girl in net. Who not only went undefeated, she won every start she had as a junior so she graduated perfect for her career. It could happen.

I’m not claiming we’ll see a female kicker in the NFL. Not any time soon. But in our lifetimes? If she was a freakishly athletic Valkyrie? And pumped full of more performance enhancers than a Kentucky Derby entry? I can imagine stranger things. Besides, it would be great for your salary cap because you’d only have to pay her 75% of what other kickers make. So win/win.