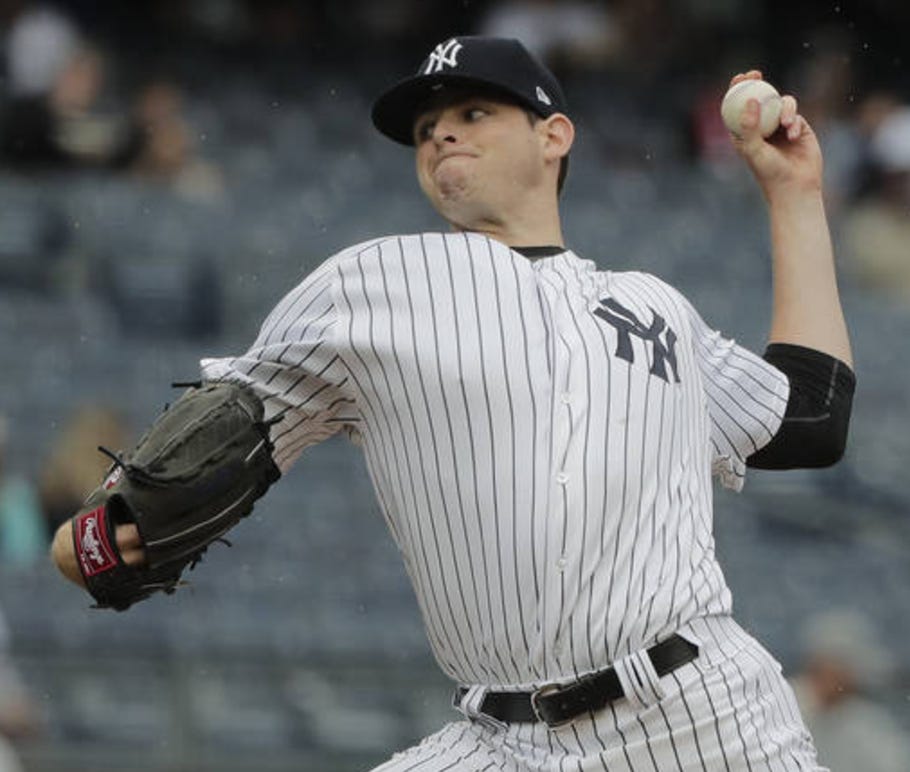 So yesterday Jordan Montgomery, one of the main cogs in the starting rotation of the future, made his major league debut. This was probably one of the more hyped pitching debuts, at least to me, in some time for the Bronx Bombers, and it did not disappoint.

We started off the day with two dominant strikeouts. The first one Jordan absolutely blew away Steven Souza Jr. with a 93 mph fastball and then got Kevin Kiermaier with a nasty slider. We were off to a blazing hot start and I was getting very amped up to say the least. Montgomery poured in two called strike fastballs to the #3 hitter Longoria. The stadium rose to their feet, as did I at the Barstool bar, but a 94 mph fastball on the black was called outside. HORSE SHIT. The rookie definitely thought he was out of the inning with flying colors, but instead had to regroup. He went on to uncharacteristically walk Longoria with three straight balls that followed. After getting ahead of Rickie Weeks Jr. 1-2  (it is WILD this guy is still in the majors) Jordan gave up a no doubter two run shot on a low fastball. I thought initially he missed his spot and left the ball over the plate, but judging by the replay this was on Higashioka with the pitch selection as much as it was Montgomery with the delivery.

After a much needed, quick second inning, Gumby found himself in some trouble in the third after a single and hit by pitch with one out. This inning impressed me the most with Longoria and Weeks(seriously this guy has one good year since 2003 why is he still in baseball) due up. He dispatched both hitters with nasty sliders in the dirt to escape any damage. In the fifth, with his pitch count creeping up, it was obvious this would be his last inning. A lead off double by Souza Jr. spelled trouble with 2-3-4 coming up in the order. After getting Kiermaier on a slider for the first out, Longoria stepped to the dish. A ten pitch battle ended once again with a wipeout slider strike out. With Weeks coming up and his pitch count almost at 90, Girardi pulled the rookie as he left to a very appreciative ovation.

Here are all seven of Montgomery’s K’s

As you probably know by now, the Yanks stormed back to win the ball game 8-4 and got the rook off the hook. Overall I was very impressed with the outing as you saw, despite not having overpowering stuff, Montgomery can locate and mix his pitches effectively to get major league batters out consistently. At no point in the outing did I think he was in too far over his head as he escaped trouble when needed. The only blemish came on that fastball over the plate to Weeks, but that was really it. He kept New York in it until he exited, and the bats eventually came alive despite the lineup being an absolute atrocity yesterday.

Grade: B+ Given this being his first start at Yankee Stadium, and factoring in an absurd amount of nerves, I’m giving Jordan a solid B+ debut. Location was a bit off and he’ll tell you that, but his stuff was great. He pitched into and out of jams effectively and showed he can really bear down when necessary. Girardi already guaranteed Jordan will be making his next start, which will come Monday night against the White Sox and Derek Holland.
Here’s Montgomery after the game

Follow me @ehubbs13 throughout the year as Montgomery builds his resume for AL Rookie of the Year. Yep, I said it. Also give Jordan a follow @Gumbynation34

P.S. James Kaprielian is going to having Tommy John surgery on his right elbow as we all feared. Montgomery is truly all we have to hope for in terms of young arms at the moment.