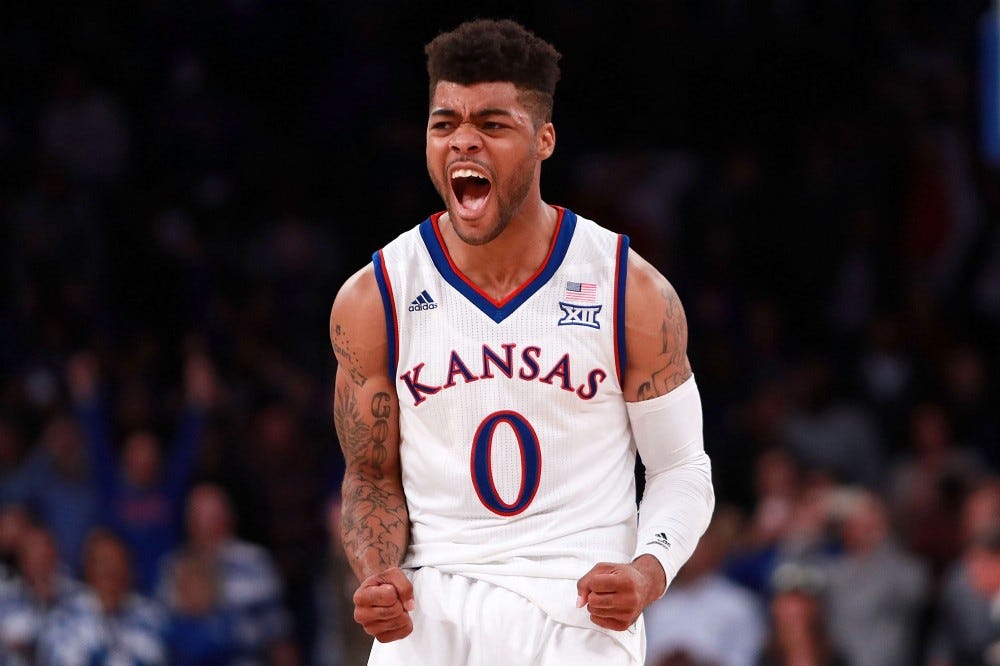 Background: Did you guys know Frank Mason was supposed to go to Towson? Feel like that never gets mentioned. Mason is currently sweeping every major award as he’s winning National Player of the Year, best PG in America and All-American teams after wrapping up one of the best individual careers at Kansas. He’s coming off a year where he averaged 20/5/4 and shot 47% from the 3-point line. Not a bad improvement for a kid who averaged 5.5 and 32% from the 3-point line as a freshman. He absolutely played his way into most mock drafts as a late second round pick.

Strengths: I’ve been told time and time again the NBA looks for guys who can shoot off the dribble. It’s arguably the most important factor for them, especially as a guard. Mason shot off the dribble 26% of the time this last year and was excellent at it per Synergy. He shot 40.6% off the dribble and scored 1.083 points per possession, which ranked him in the 93rd percentile nationally. He does like using a hesitation dribble to not only get space from the defender but to get in rhythm for his shot. The other thing that scouts like about his ability to shoot off the dribble is most of the time it came in the high ball screen or handoff situation. We’re seeing more bigs in the NBA step out and run the pick-and-pop or high ball screen leaving the entire lane for a guy like DeAndre Jordan to roll through. Here’s an example of him being able to create that separation over a bigger player in Swanigan, who switches on the high ball screen:

The other thing people like about his shot off the dribble is his footwork. He does an excellent job of getting his feet not only set and squared but in the same stance every time. His release isn’t necessarily the quickest, but his footwork is extremely quick. That goes a long way for a guy with his size as he can take advantage of the hedge or a defender getting caught in the screen. This is what I mean. When you go back and watch his shots off the dribble, he gets in this stance every time, no matter where he is on the court. It’s consistency, which is all you preach about for a shooter. 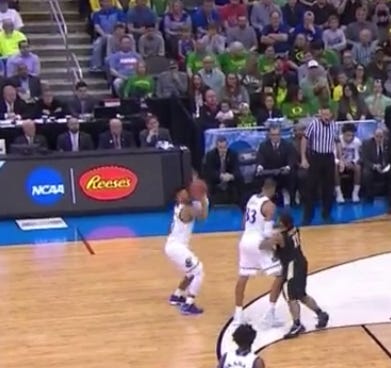 Perhaps his biggest improvement though came in taking care of the ball and improving his basketball IQ.  Looking at his advanced stats he upped his assist rate from 22.4 to 26.1 and lowered his turnover rate from 19.3 to 14.4 over his four years in Lawrence. Again, with spacing being the key in the NBA, guards need to be able to draw attention and kick or know when to shoot. Teams are going with these ‘small ball’ lineups and taking advantage of the 3-point ball when needed. We’ll be looking at Mason from a backup point guard standpoint, especially with him expected to go with one of the last picks in the draft. In ISO situations when the defense committed this year, Mason was excellent, at 1.075 points per possession overall. This shows his basketball IQ as he was even better in draw and kick situations at 1.206 and pass to spot up situations at 1.107. Kansas did surround him with three other shooters and a big, which is something you can expect to see at the next level. I like looking at both the draw and kick and pass to spot up numbers for point guards here. In this play he’s able to beat another future NBA player in Jawun Evans off the bounce and get into the lane. It’s not some sort of designed play or anything like that, just him going and making one. Now, it’s nothing outrageous but it just shows the smarts to kick to the open Josh Jackson in the corner three (analytics celebration for the best shot in basketball) instead of trying a floater.

Just another example of watching Mason drive and make the smart pass, this time for a dunk. He does have a quick enough first step for him to be successful driving in ISO sets in the NBA.

Weaknesses: To be frank the two biggest weaknesses for Mason are things he can’t control. The first is his size. He’s only 6’0″ which is something he’ll battle the entire time. You just don’t see too many shorter point guards overly successful in the NBA as of right now. Most of the points are in the 6’2″ range, knocking him down a couple spots right off the bat. The second thing is his age. He’s already 23. Teams have said and will continue to say they will pass on the guy that’s 4 years older than someone similar. It just makes sense to have the 19-year old from a business decision, especially when you get into the later part of the draft.

In terms of just his game, the biggest weakness is scoring inside the paint effectively. He graded out as just average from jumpers inside of 17′ at just .731 points per possession as opposed to .941 from 17′-3-point line and 1.38 from behind the line. More specifically around the basket this year he had 103 possessions (not post ups) to which he struggled. He graded out in just the 39th percentile and scored less than 50% of the time. He needs to get better at finishing at the rim, whether it’s using the rim as a protector better or getting his shot up quicker and/or higher off the glass.

It’s no longer a huge weakness but something to keep an eye on. He can get inconsistent with his form when shooting off the catch. When he was younger he would often catch standing straight up, making his release slower as he had to get his legs into the shot. He’s changed his stance and is now more consistent in catching the ball ready to shoot. In the NBA he needs to continue to be consistent with this, especially with his size as that half second delay in getting his legs bent could determine whether or not he even gets a shot off.

Draft Stock & Projection: I do think Mason will end up being drafted as someone will take a flier on him late in the second. When you look at the teams who are picking in the last 7 picks it’s the Celtics (twice), Suns, Jazz, Knicks, Nets, Hawks and Spurs. Outside of the Celtics and maybe the Jazz, every team could use help or depth at the point guard spot. It wouldn’t shock me to see Mason turn into this year’s Yogi Ferrell in the sense that he’ll spend a lot of time early in the D-League, put up good numbers to earn a 10-day contract and end up with a guaranteed spot. He’s always been an aggressive player, which somewhat hurt him during his freshman/sophomore year but now it’s a huge benefit as he’s improved his ability to not force the issue. He’s not afraid to take the big shot and looks to score. Being a backup guard you want to be able to either get others involved right away and take care of the ball or be a microwave scorer. He has the ability to fit into either spot, which makes him worth that late round pick.