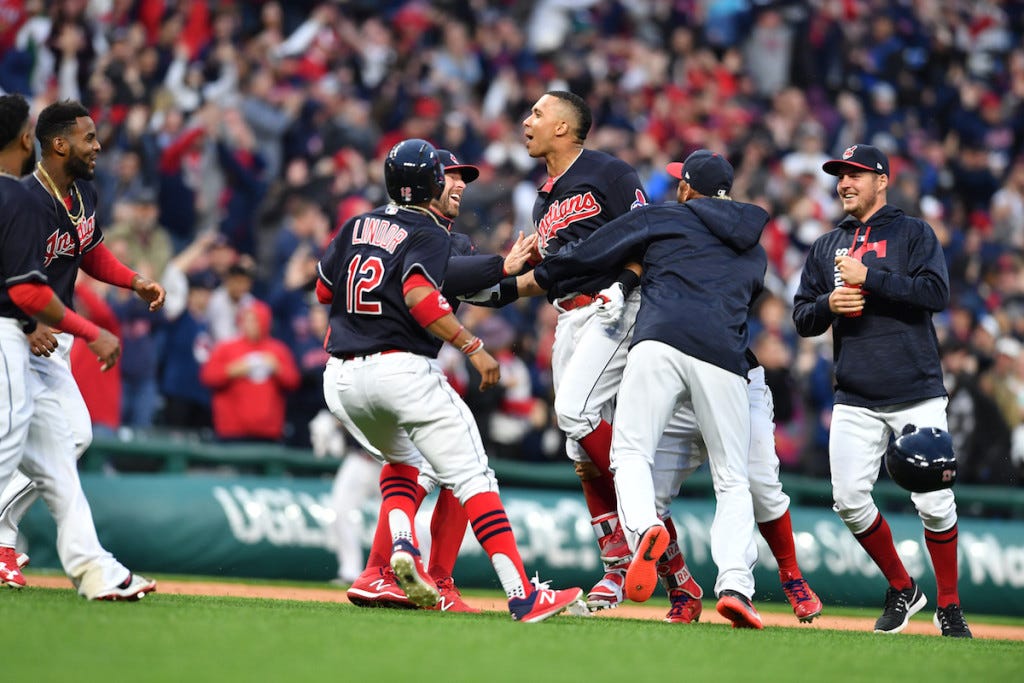 Vegas got it all wrong when they had the Red Sox as co-favorites to win the 2017 World Series with the Cubs. Nobody on planet earth should have a problem with the Cubs being favorites to win the World Series, but the favorite out of the American League should be the Cleveland Indians. I’m obviously not saying that the Indians should be the favorites based on one walk-off win in April, but the man who facilitated that walk-off is a big reason why they should be.

The man who started on the mound for Cleveland yesterday is another reason why. The Indians made it to Game 7 of the World Series last year without Carlos Carrasco, who tossed seven innings of one-run ball, while striking out seven in the home opener. And the man who ended that game for Cleveland yesterday, Michael Brantley, played in just 11 games in 2016, but hit .310 with an .859 OPS and a league-leading 45 doubles for the second consecutive season in 2015.

Those two pieces are back, and so is Danny Salazar, who was limited to just two relief appearances in the World Series after making 25 starts for the Tribe last year. Carrasco and Salazar combined with perennial Cy Young candidate Corey Kluber is likely going to be the best three-man rotation in the American League while David Price is on the shelf for Boston.

Beyond that, this is also Cleveland’s first full year of having Andrew Miller in their bullpen. Imagine if that deal with the Brewers actually went through, and they also had Jonathan Lucroy behind the plate? I know he’s gotta say publicly that he doesn’t regret how things ended up going down with him getting dealt to Texas instead, but what player wouldn’t want to be a part of what they’ve got going on in Cleveland right now?

You’ve got a couple hot starts by the Twins and Tigers to start the year, both 5-2, but we can expect the Twins to fall off any minute now, and the Tigers to once again be Cleveland’s stiffest competition in the AL Central, but that’s the Indians’ division to lose. And I have to believe that they know that.