Tired of losing to the Patriots, the Dolphins’ Jarvis Landry has a bold 2017 prediction in @SI_PeterKing‘s column. https://t.co/25qcvFocgO pic.twitter.com/2WxZdbgRsg 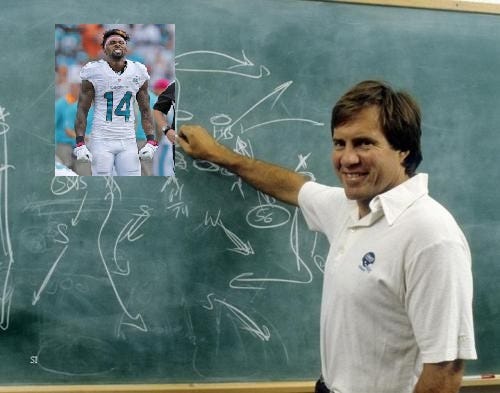 Peter King has been on a tour with NFL UK, promoting the league in England with Kurt Warner, Kirk Cousins and Jarvis Landry. And he reports that Landry told a crowd in Liverpool the Dolphins will sweep the Patriots this season.

I told Landry that was quite a bit of bravado. And he said that was good, and he wanted people to know how he felt.

“If you’re a competitor, that’s the way you should feel, and I don’t mind saying it,” Landry said a day later. “It’s time for a change. I have all the respect in the world for the Patriots, and I respect Tom Brady tremendously. But they’re not our big brother anymore.” …

What, I wondered, gave Landry the confidence to predict a 2017 sweep of the five-time Super Bowl champs?

“Coach Gase,” Landry said, riding the bus back from Tuesday night’s event in a suburb of Liverpool. “He’s flipped the switch with us. New England’s won the division 14 of the last 16 years, something like that? It’s ridiculous. It’s a problem. We cannot let that happen anymore. What I’ve seen is, when we play that game, sometimes we focus on the guys on the other side of the line instead of just focusing on us. And I want to be part of that change. I want to go into the games against New England expecting to win—that’s something we need to do. … It’s a still a hill to climb with New England, but we need to expect to win. That’s it.”

Thank God for this. Thank God for Jarvis Landry. Praise be the Lord. And I mean it. I’m not even mad at Landry for saying it. On the the contrary. I needed this like I need air to breathe.

It’s just not Spring until someone in the AFC East says it. Some variation on the “This is the year we overtake the Patriots” theme. We’re closing the gap. I’m not here to kiss the rings. We’re coming for them. Brady’s window is closing. We’ve found the blueprint for stopping Brady. Their time is over. This is our time. Whatever. Last year it was Eric Decker saying that with Brady out for four games, the division was “up for grabs.” It’s like a single malt scotch for my soul.

And the best part is, this sentiment is now in its 17th big year. Through 23 AFC East coaches not named Belichick. Through the Jets hiring Eric Mangini and Rex Ryan and drafting Mark Sanchez. Through Nick Saban hiring by the Dolphins and his subsequent quitting on the Dolphins. The Wildcat. Signing Ndamukong Suh and Mario Williams. The Bills trading for Drew Bledsoe, picking up Lawyer Milloy and finally ridding themselves of Ralph Wilson. Hell, just the Matt Cassel year alone was supposed to the Patriots undoing, because Brady was getting on in years and his “window” was “closing.” That was nine full seasons ago. And the last time the Pats didn’t win the division.

For all that false hope and phony swagger, the last time the Pats didn’t at least tie for the AFC East in wins was 2000. Year in and year out it’s been a baby seal clubbing. Except the seal can’t stop trying to convince you he’ll be on the right side of the bat this time. Yup, this time for sure. Adam Gase has it all figured out. Make your players expect to win and it will happen. All you have to do is believe you can fly and you will, Peter Pan. Like I said, I’m not even mad. I respect Landry is trying to talk himself into buying his own bullshit. And I’ll almost feel bad when it ends up on the Pats bulletin board and they lose both games by a combined eight touchdowns. Almost. For now I just want to thank him because I needed this.