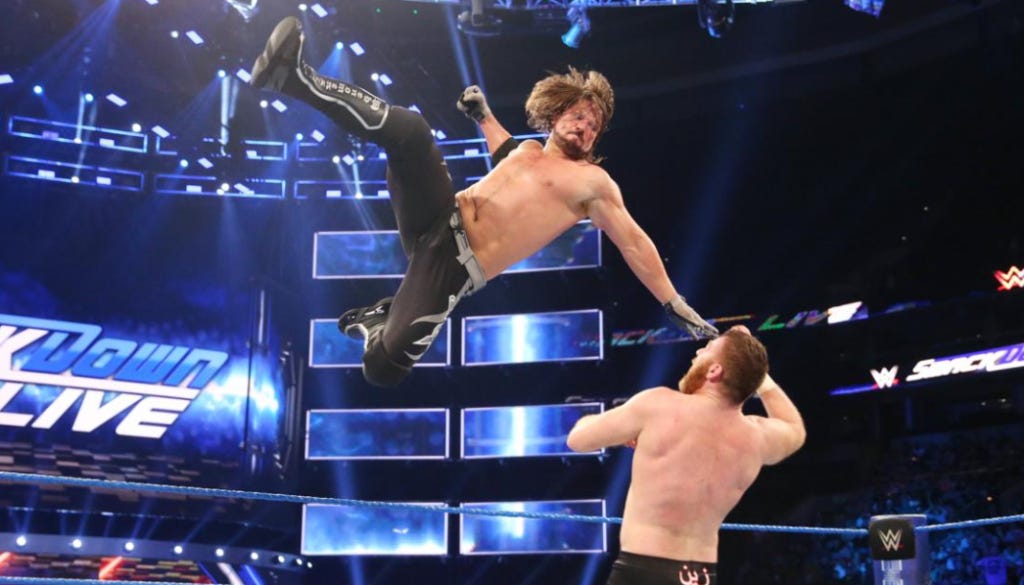 After it seemed like Smackdown Live gave pretty much every member of their roster to RAW, they had their work cut out for them to build back up. I was skeptical, but I think they delivered, and even made up for a blatant plot hole in the midcard championship situation.

Here’s the RAW superstars who made the jump to the blue team last night:

In comparison to RAW, who got:

I’d say SmackDown was the winner. Let’s talk about the show.

Clean shaven suit KO! Handsome! Not featured in that video is the massive pop he got when his music hit to open the show, making it even more impressive that he was able to swing the crowd into booing him. Call the Bruins reference cheap heat, but if it works, it works, and my god did it work. The Big Breakfast Baron Corbin interrupted, and I thought, “Hey! This could be great!”…then Sami Zayn’s music hit. Holy shit. Owens was in disbelief, and while I’d rather these two stay away from each other for a while, this made for a really good moment. AJ Styles came out to let these boys know that SmackDown is his yard, and Daniel Bryan set up a match. The plot hole I referred to earlier is Bryan trading away the Intercontinental Championship without the guarantee he’d have the United States Championship, and that is now a guarantee. If Chris Jericho defeats Owens at the next pay per view, he will become a member of the SmackDown roster in KO’s place. So, the main event was set…AJ Styles vs Sami Zayn vs Baron Corbin for a shot at the United States Championship.

I’m excited for the upcoming months of Kevin Owens on Talking Smack. He’s the best on the stick by a million miles.

Randy Orton and Erick Rowan had a match. It was not good. Bray was a titantron head once again, and it makes me uncomfortable that he’s on both brands. My OCD can’t take it.

American Alpha and the Usos can’t have a bad match if they tried. Every single one is just a bunch of fun, with highspots, false finishes, hot tags, all of it. Primo and Epico debuted on SmackDown in the same exact way The Club debuted on RAW, and while they’re decent in-ring, I’m just not sure if I want that push to happen.

Shane O Mac with the troll job of the century! Teasing Charlotte, calling SD’s newest addition a “second generation superstar”, and bringing out TAMINA, that may be the biggest let down of all time. Charlotte and Tamina’s skill difference both in and out of the ring is similar to the skill difference between myself and AJ Styles. Charlotte actually debuting was well done, and I’m excited to see what she brings to the division.

Aiden English is back to his old NXT gimmick after Simon Gotch asked for his release, and even though I was a Vaudevillians fan, this makes me very happy. I’m nostalgic almost! I love the performance arts gimmick and a lower mid card heel. Tye Dillenger is going to be a real star as long and he’s not squandered, and I think he makes that more and more apparent each week.

Shinskaaaaaaaaaaaaay. YeaOH! I wanted Nakamura’s first feud to be with The Miz so his broken English wouldn’t matter as much, and he could be carried, but now he’s got Ziggler, who is the polar opposite of Miz on the mic. When Dolph talks, he doesn’t make me want to see him get his ass kicked, he makes me want to change the channel. I hope WWE takes their time with Nakamura and doesn’t hotshot him before casual fans have fully accepted him as a top dog, because he could main event WrestleMania by next year.

To end that fast paced, great show, these three guys put on a hell of a triple threat, similar to Ambrose/Styles/Cena from October. Styles won, and now we have Kevin Owens vs AJ Styles on pay per view to look forward to. I saw those two tear the house down at a Madison Square Garden house show, and with the motivation of being in front of the world this time, I’ll expect nothing but the best.