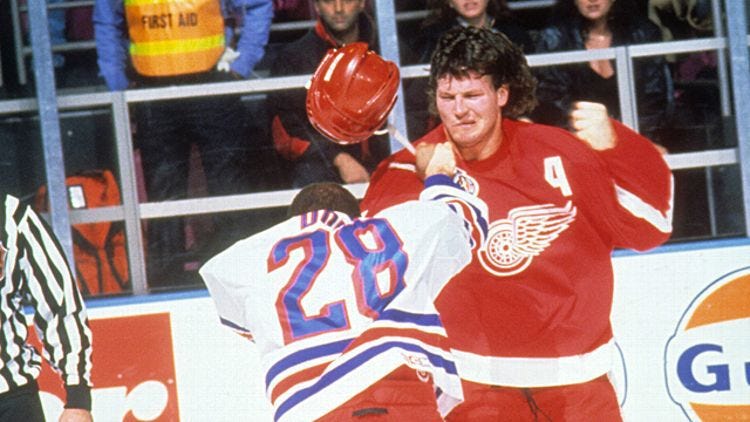 ABC – Late Red Wings enforcer Bob Probert has been given a little more time in the penalty box at Detroit’s Joe Louis Arena.

Probert’s widow, Dani, sprinkled some of the forward’s ashes in the box on Sunday, when the Red Wings played their final game in the stadium. Probert’s daughter, Brogan, tweeted Sunday that she “can’t think of a better place” for her father’s ashes.

This is one of my favorite stories of the year. Joe Louis Arena was home to the Detroit Red Wings from 1979 to just the past Sunday. For the first time in 25 years, the Red Wings aren’t in the Stanley Cup Playoffs so the Joe won’t be hosting any playoff hockey this year. But that is nearly 40 seasons in the same building for the Red Wings. The ’97 Cup. The ’98 Cup. The ’02 Cup. The ’08 Cup. You think of all the history that building has seen. It’s been home to legends like Steve Yzerman, Sergei Fedorov, Nick Lidstrom, Chris Chelios, and of course, Bob Probert.

One of the greatest enforcers the game has ever seen. Legend doesn’t even begin to describe Probert. He never got to win the Cup with Detroit but you better damn well recognize how his protection of guys like Yzerman led him to become the player and captain that he was when he eventually got that dynasty going. 3300 career penalty minutes. 2090 of them coming in the 9 years he spent with Detroit. That’s close to 35 hours of sitting in the penalty box at the Joe. And now he gets to stay there for eternity. Or at least until they tear it down but in spirit he’s still sitting in that box just waiting until he gets out to bash another victim’s face in.