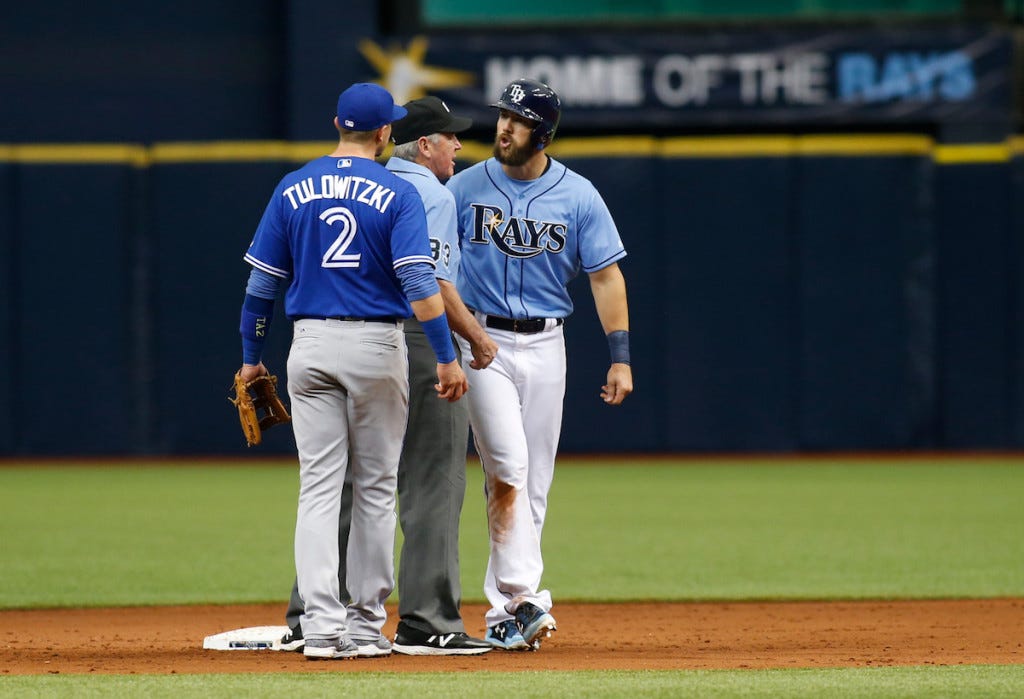 I want to like the Blue Jays. I really do. They have some awesome, young, and exciting players, but they make it so fucking difficult with the hardo, tough guy act, then reverting back to the crybaby, us against the world mantra. They act like the league is out to get them, but they honestly bring it upon themselves.

Couple examples here — during last year’s postseason, Jose Bautista said that 24-year-old Cleveland Indians starter Ryan Merritt would be “shaking in his boots” when pitching in Game 5 of the ALCS in Toronto. The Indians won the game, which ended the series and Toronto’s postseason run. Indians pitcher Trevor Bauer then trolled Bautista by tweeting a picture of cowboy boots…on Bautista’s birthday. Bautista also complained about the “circumstances” that the Blue Jays had to deal with in the series after Cleveland jumped out to a 2-0 lead in the series.

The other example would be from last September, right before that postseason run began, when the Blue Jays hung up pictures of Toronto journalists in the clubhouse, and they X’d out the faces of the ones that players were advised not to talk to. Why? Because the Blue Jays were sliding in September, and the writers were being critical of a team that was seemingly collapsing during the most crucial month of the season. No mean words allowed.

I think the rest of the league is starting to grow impatient with Toronto’s whiny attitude, which is what we both saw and heard from Tampa Bay’s Steven Souza yesterday.

First thing’s first — that was a late slide by Souza. Troy Tulowitzki’s gripe is legit, but he obviously didn’t do anything to defuse the situation after the fact. I think this is an obvious case of these two guys just flat out not liking each other, hence the late slide and Tulo getting in Souza’s face immediately.

And there’s some history here, obviously. In case you missed it last year or just forgot, there was an altercation last September between Souza and the Blue Jays that involved Tulowitzki going full hardo for no reason.

With the Red Sox, Blue Jays and Orioles all being above average teams, I still don’t think the Rays are a contender in the American League East this year. But they’re off to a hot start at 5-2, and they’re probably tired of being written off by the media and baseball fans as being a team that isn’t very good.

Credit where it’s due — their rotation of Chris Archer, Jake Odorizzi, Alex Cobb, and even Blake Snell, as he continues to develop, is pretty damn good. That, and it seems like Souza is just flat out tired of Tulowitzki’s shit. It’s hard not to love the attitude that the Rays are playing with right now. Low expectations or not, they’re here to play the game hard. Gotta respect it.