Look, I’ve never been a Thor movie guy. I’ll support the shit out of the God of Thunder just because of the 6’6″ monster that takes the bump once every five days for the Mets. But my simple human brain can kind of grasp what Asgard is and different gods mumbo jumbo. If I’m going to a comic book movie, I like to keep things simple enough so I can look at some super powers and explosions while I shovel popcorn into my mouth. Don’t get me wrong, I can definitely fuck with Thor blasting fools with his hammer in an Avengers movie or getting cozy with Natalie Portman, but I can’t get down with the weird different dimensions stuff. Same goes for weird ass space movies. I just can’t get into them like other movies. And cutting Chris Hemsworth’s hair is like taking away Thor’s hammer, which both look to happen in this movie. No fucking thank you.

HOWEVER, the people at Marvel may have saved this movie from being a failed Guardians of the Galaxy + Fifth Element flick with two simple components.

1. Goldblum. Give me ALLLLLLLLL the Goldblum you have. And then more. Can’t get enough Goldblum. The weirder the role, the better. Just hearing those golden pipes tickled me pink. You know how hard it is to make a man my size get tickled pink? It ain’t easy. But that voice and this outfit has me tickled pink, even if that blue patch gave me PTSD of that fuckhead Scott Spezio’s soul patch in the 2006 NLCS. 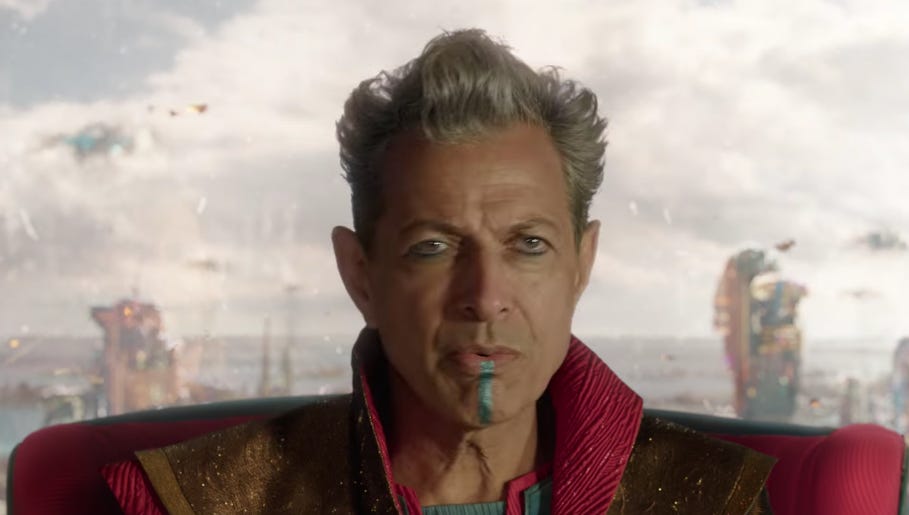 2. Thor vs. Hulk should/could be awesome. However my radars are up. I have watched wayyyyy too many episodes of The Challenge on MTV to be fooled by stuff like this in a commercial. They are the kings of making a 30 second fight appear to be an epic 10 minute battle. I hope I’m wrong because watching Thor and Bruce Banner bash each others’ brains in would be all sorts of mindless fun. When The Hulk is Hulking, there may be nobody more fun in the Marvel Universe.