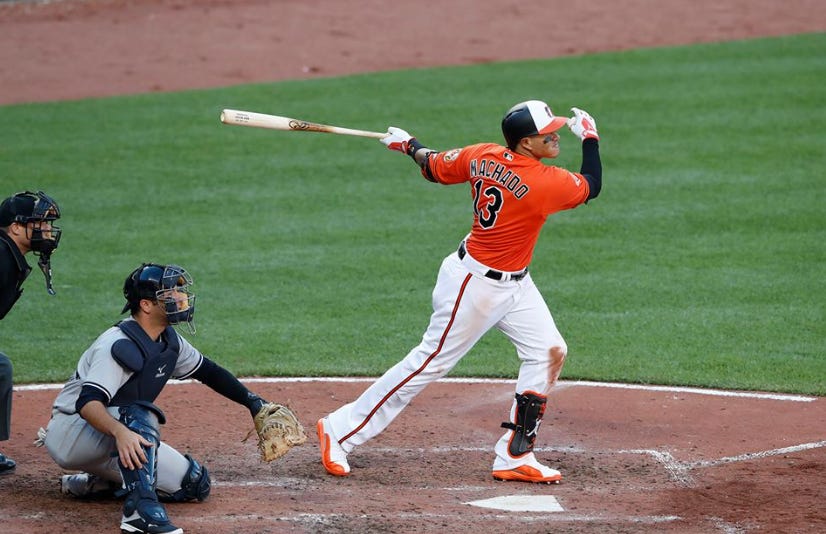 First week in the books for the Orioles and not a bad week at all. They’re 4-1 after winning their first four games of the season, two against Toronto and then taking two of three from New York. There was a common theme in the games this season so far, and it’s not a good one, but I’ll dive into that later. Standings at this time don’t mean anything, except that the Orioles are now the only team in the A.L. East that can go wire-to-wire, but their 4-1 start is a good sign. They beat two good pitchers for the Jays, and got come from behind wins against the Yankees bullpen, you don’t hate to see that. The Birds have only played five games so far, and have had three days off, I don’t like it from a game watching point of view, but for the team and these pitching woes, it’s great. Lets look into the early, early, early storylines of the O’s season. 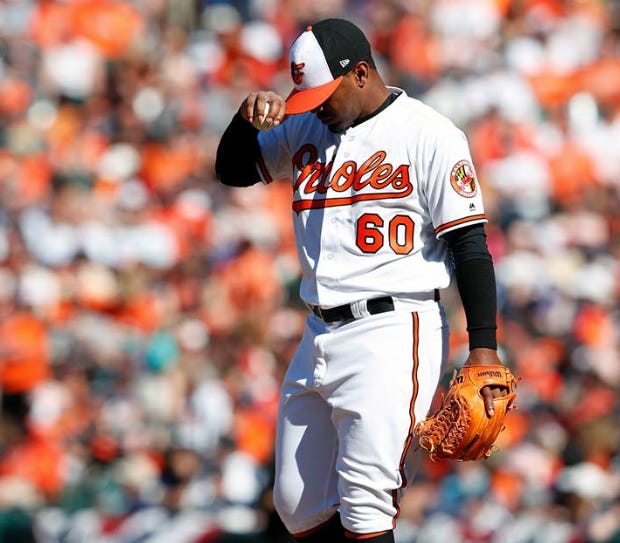 We’re literally a week into the season, and the Orioles bullpen has already been used too much. We’ve talked about it for years. The Orioles don’t have good starters, that then drags the bullpen down too because they will be overused because Baltimore starters are allergic to going deep into a game. Look at the starters innings pitched so far.

Besides for Bundy, these are not good. Kevin Gausman absolutely has the stuff to be the #1 guy for years to come in Baltimore, the guy needs to be going deeper than the god damn fifth inning. I know he has 33 more starts left, but this start isn’t what we wanted to see. A WHIP of 2.000, an ERA over 5, 8 Ks and 7 walks, not an ideal ratio. Wade Miley had the weirdest line I’ve ever seen out of a pitcher in Sundays game.

Only Wade Miley could give up 7 walks, 1 hit, and 0 runs. But of course he only did it through 5 innings because his arm is a wet noodle. Ubaldo Jimenez is Ubaldo Jimenez. There are still a small group of Ubaldosupporters in Baltimore who somehow think he’s still a good pitcher. Give me whatever they are on. Jimenez only went 4 1/3 and has an ERA of 10.38, the guy STINKS. Now why are we focusing on the starters being trash when the Orioles are 4-1? It’s because the bullpen hadn’t given up a run in the first 16 2/3 innings, but it all fell apart in the sixth on Sunday.

Tyler Wilson gave up the first two runs, Mychal Givens gave up the solo shot to Aaron Judge, and then Darren O’Day may have had his worst outing as an Oriole. He had never walked three batters in a game before, and he did that Sunday, costing the Orioles a sweep. O’Day has been lights out since he came to Baltimore, and he was fighting the flu all week, he gets a pass, but it’s not a good sign that he didn’t look good. Zach Britton has also been hit hard this season, which is shocking to all of us. Still 3-3 in save chances, but has given up six hits in five innings, he also has a WHIP of 1.600. Both he and Brad Brach appeared in the first four games this season, those are two guys you really don’t want to have throw 20 innings in April, let them get stretched out. I may be harping on this, and yeah the O’s are 4-1 and I’ll live with it, but I’d like to see these starters go a little bit longer into the games, especially with Chris Tillman a few weeks out from returning to the rotation. That shoulder injury won’t let him go deep into games as well, so we need Gausman and others to sack up and meet the 7th inning. 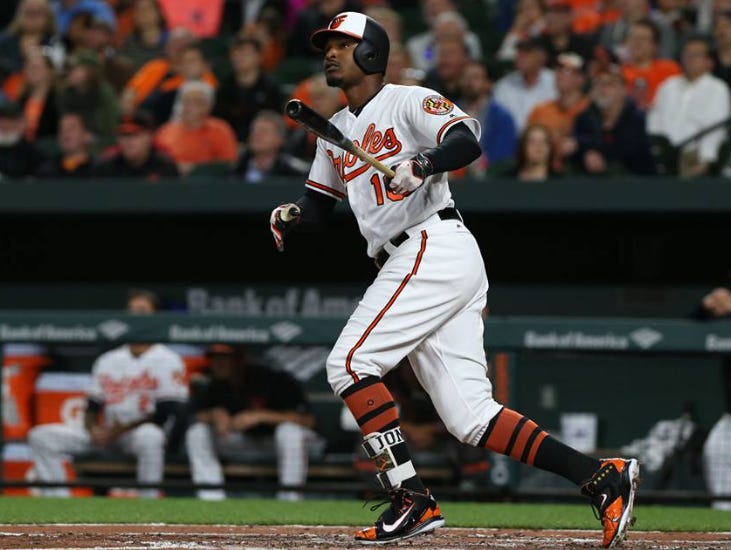 – According to MASN’s Roch Kubatko, Chris Tillman is expected to return to the Orioles rotation around the first week in May. Dan Duquette said on Sunday that he thinks Tillman will pitch in an extended Spring Training game on Tuesday and then hopefully in Double-A Bowie. Early May seems like the time we will see Tillman back up.

– No one is really making any noise on offense yet. Everyone just kind of has “bleh” numbers. Crush is hitting .333/.400 with a hit in every game and a dong. Mark Trumbo has the walk off homer on Opening Day and five driven in. Manny Machado hit an absolute BOMB on Friday against New York and has four driven in. Seth Smith has been a nice little surprise, the game winner on Friday night in the comeback against the Yankees, a .385 average, and has five hits in three games. Now a guy who is struggling is Jonathan Schoop. He has made some rough plays in the field, and is only batting .125 with a .222 OBP. NO XBH, runs driven in, no nothing. Need Johnny to step it up.

-I think I love Manny and Schoop more than they love each other. Just guys being guys.

Much like Dave wishes he could do, the Orioles are stopping up in Boston for a quickie. Luckily for them they get Drew Pomeranz making his season debut fresh off the DL and the knuckleballer, Steven Wright. They miss Chris Sale by a day, but get to see that fluttering knuckleball instead this series. After that they head to Toronto for four, and then onto Cincinnati for a three game series to round out a nine game roady. I wouldn’t hate taking advantage of this sick, beaten up Red Sox team. I think everyone has the flu, or AIDS up there or something, who knows what is going on up there. Jackie Bradley Jr is on the DL with a knee injury, so they are no where close to full strength, taking any games from Boston is what the Orioles need to do if they want to have a change to compete in the division.

Bottom line is the Orioles are winning, even when their starters aren’t going deep, but that will likely catch up with them soon. You can get away with that playing against the Yankees or Rays, not with the Sox. Need Bundy to be the bulldog he is an and go 7 or 8 tomorrow and take one from Boston.

PS. Shout out to everyone who came out before the game and after with JJ and I on Saturday. Met a bunch of cool stoolies, drank some beers, watched the Yankees piss themselves and the Orioles come back to win again.