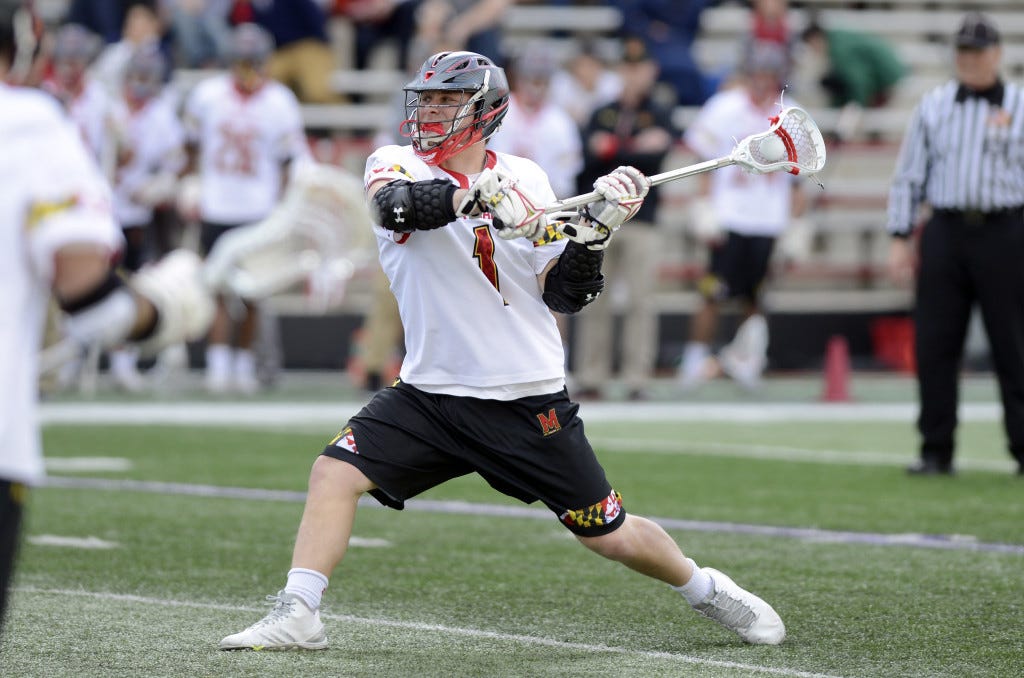 That right there is probably the most important word of the 2017 college lacrosse season. It’s the only word that accurately describes just what in the hell has been going on all year. As far as the top 20 teams in the nation are concerned, at least 15-17 of them are pretty cemented. I think we know which teams are tournament teams and which teams are not. But as far as the order of those teams go? Well who the fudge knows. And as far as who the #1 team in the nation is? Well it could just be you next week if you’re not careful. Because like I said last week, nobody wants to be #1 anymore. Just take a look at the weekly #1’s from the USILA Coach’s Poll and Media Poll respectively. 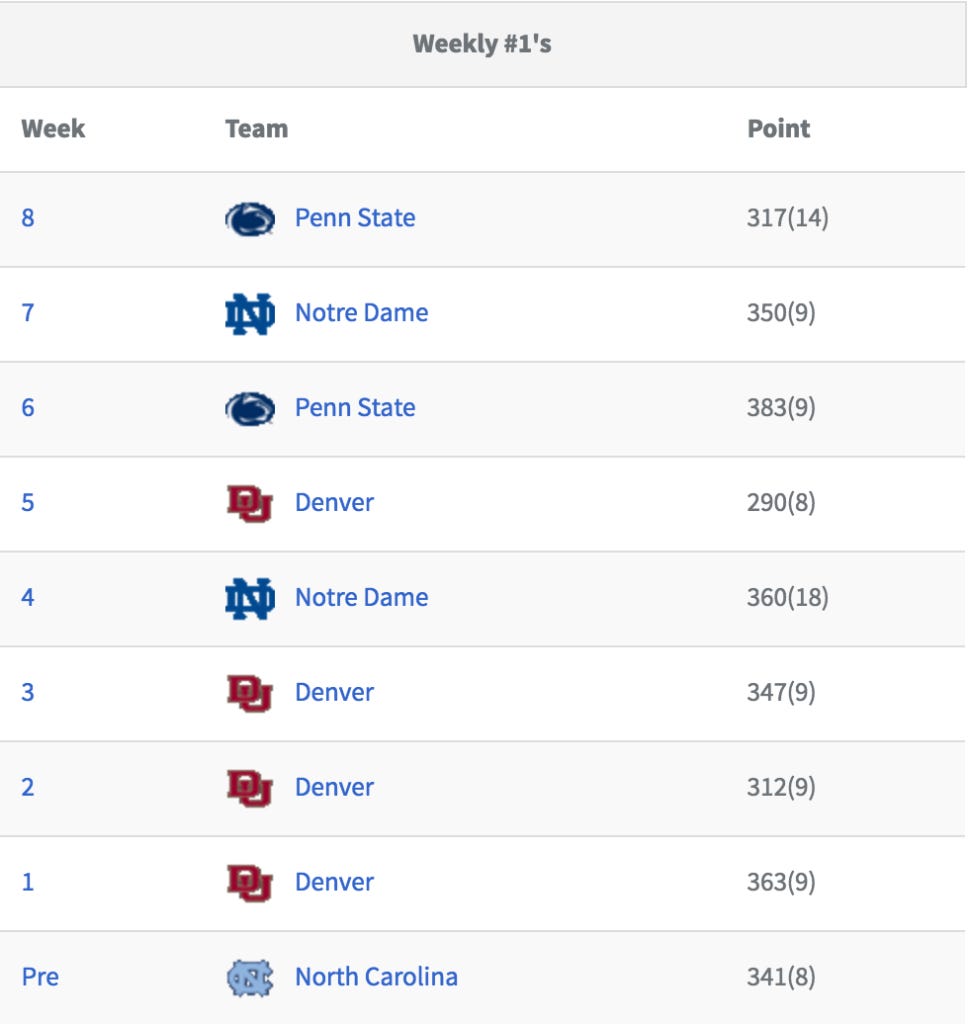 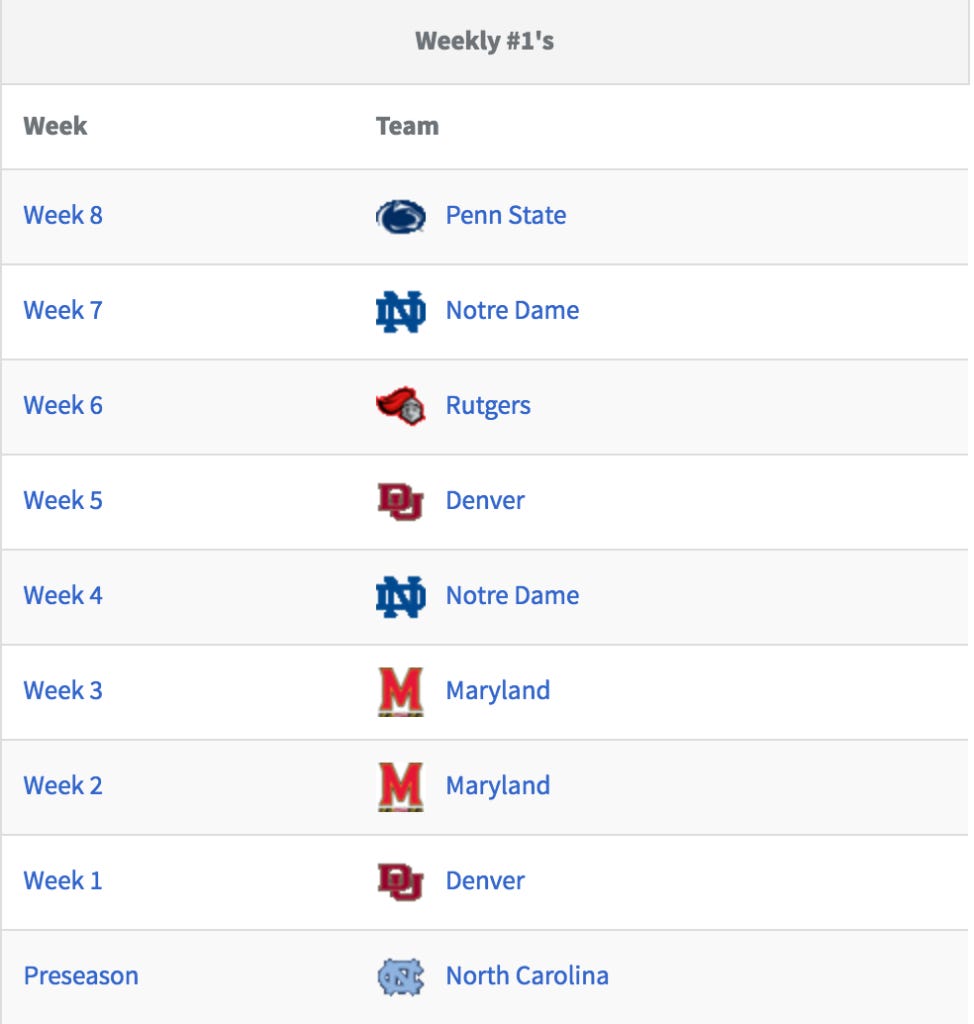 5 straight weeks with a new #1. 5 straight weeks of chaos. Like I said, I think we have a pretty good understanding of which teams we’ll see playing past the first week of May. But we’ve got a month left of regular season college lacrosse and so far, nobody has stood out as a clear favorite to be the last team standing at Gilette Stadium on Memorial Day.

Last week we saw Penn State get up to their first big time challenge of the season by knocking off Ohio State to become the consensus #1 for week 8. Making way for Penn State to grab the #1 spot was Syracuse knocking off Notre Dame with another 1-goal win. Hofstra is the only other team besides Penn State still without a loss after beating Fairfield. Duke gave North Carolina their 5th straight Top 20 loss at home. And yeah, here’s the rankings for this week but just know they will be completely different after this weekend so don’t put too much stock into them. 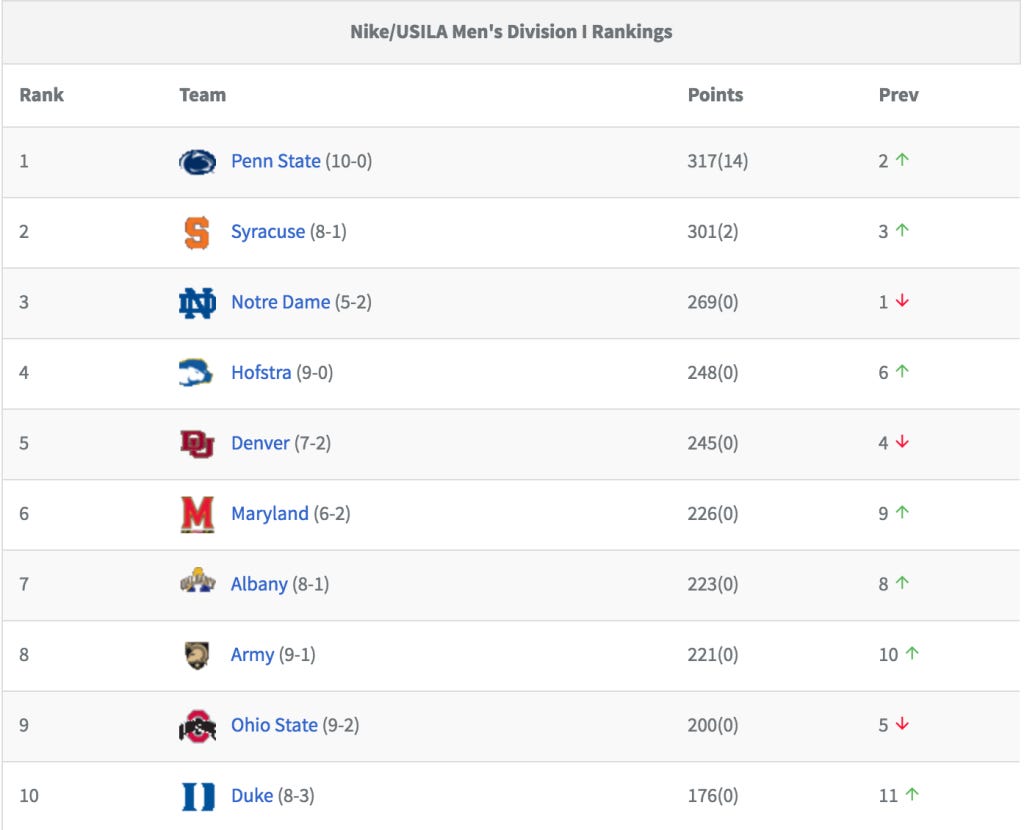 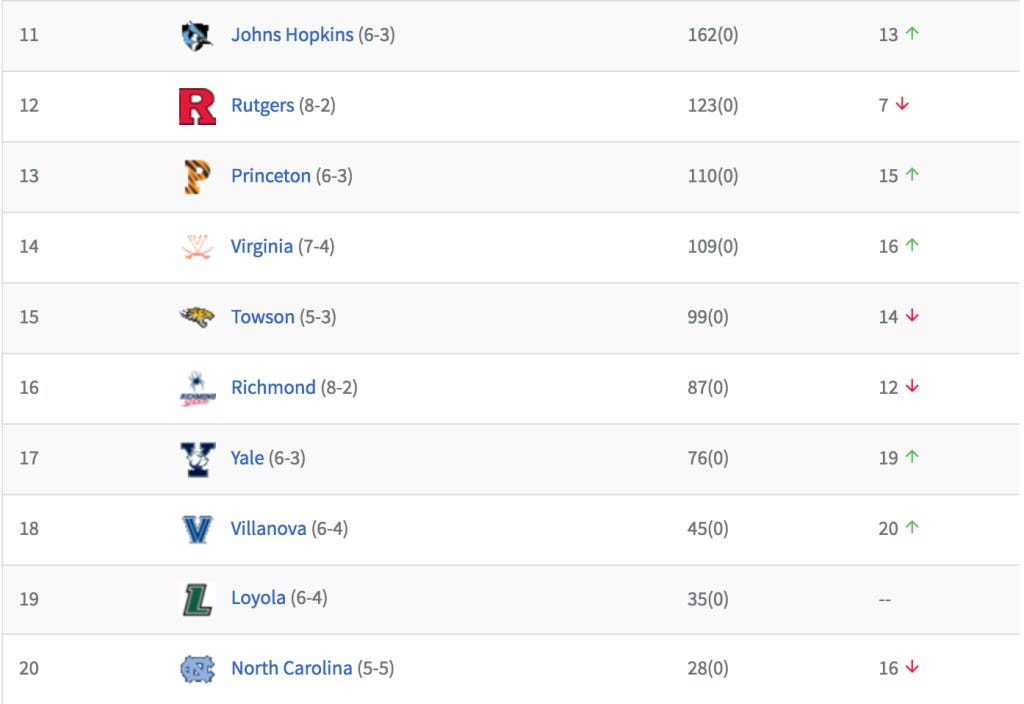 Like I said, last week was the first real big test for the undefeated Penn State team. There have been plenty of doubters all year as their out of conference schedule wasn’t necessarily a gauntlet. Most people were expecting them to be exposed against Ohio State and that’s the reason they were a 1 goal dog at home against the Buckeyes. But they went out there and not only gave OSU their 2nd loss of the season, but they snapped some ankles along the way.

Unfortunately Syracuse has the weekend off. But they played in their 7th straight 1-goal game last week against Notre Dame. Which was their 5th straight 1-goal win and deserving of some 1st place votes. They finally beat a team by more than 1 on Wednesday after downing Hobart 17-11. They have the weekend off and then play Cornell on Tuesday which should be another win. Depending on how PSU vs Maryland goes this weekend, they could be the next team up for the #1 spot. 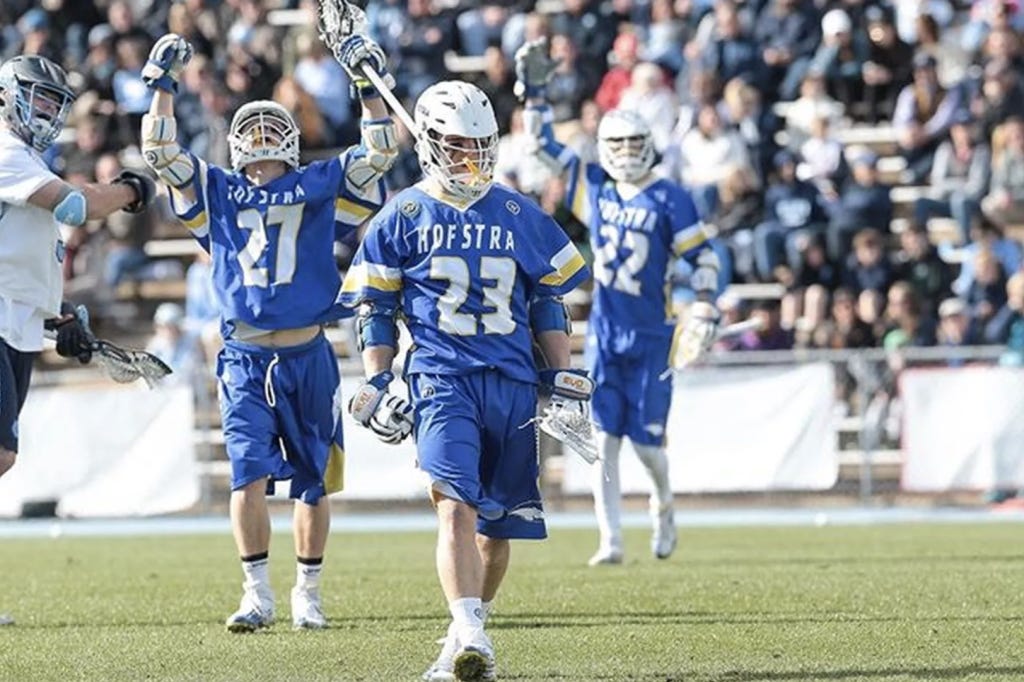 The only other team who could possibly end up as #1 next week if Penn State drops their 1st game would be undefeated Hofstra. They are 9-0 with wins over Princeton which looks better now than it did in the beginning of the season, and a win over UNC which looks worse now than it did when that game was played. Either way, they have Delaware this weekend which could be a little tricky for the Pride. Delaware knocked off Rutgers the other week and gave them their first loss on the year. Could they fuck up another team’s undefeated season? Honestly, your guess is as good as mine because that’s just the way this season has gone so far.

Speaking of North Carolina, I’d just like to continue on that point about their 5 losses this year. All 5 of them have come against Top 20 teams so I get that they aren’t the worst losses ever. They have a tough schedule but that’s the nature of the beast being in the ACC. Also–they are the reigning champs so naturally every team is going to give them their best game. With that being said, you can’t come out and lose 5 games against top 20 teams AT HOME and still deserve a spot in the tournament. Even if they win out against Virginia, Cuse and Notre Dame. The only way this UNC team deserves to be in the tournament is if they win the ACC tournament.

Anyway… let’s get to this weekend’s schedule that has five top 20 matchups.

Obviously the biggest game on the schedule this weekend is Penn State vs Maryland. Like I said before, last week’s game against Ohio State was the first real test for PSU. With that being said, this is the biggest test they’ll have all season. Maryland is a 1-goal loss to Notre Dame and a bad overtime loss to Villanova away from being the best team in the country. They have played in the last 2 National Championship games. They are a blue blood program. If there are any Penn State doubters still out there, they are waiting on this game. It’s a home game for Maryland and they’re a 1.5 goal favorite over the #1 team in the country. This is a huge week for the Terps as they have Penn State on Saturday and then the makeup game against Albany coming up on Wednesday. There’s no shot they drop both of those games and if one of those matchups seems a little more fucky than the other, I’d say it’s traveling to Albany on a Wednesday for a make up game rather than a home game on Saturday when the student section is going to be out in full force. Maryland is currently scoring 13.5 goals per game and only giving up 8.6. Penn State is scoring 14.7 and giving up 10.3. As lethal as Penn State’s offense is with Ament, O’Keefe and Sutton, they just haven’t gone up against a defense as strong as Maryland’s yet. I’m still a believer in Penn State and see them playing deep in to May, but I’m looking at about a 12-10 win for the Terps on Sunday.

Last week’s 12-8 win over UNC was a statement that Duke is in late season Duke form. I feel like I mention this every week but every year Duke starts off slow and then works themselves into Championship Weekend form by the last half of the year. Justin Guterding is 2nd in the nation with 56 points and the combo between him and Jack Bruckner have them overpowering teams with offense. With that being said… they brought in Eli Manning to practice this week and screwed up everything they’ve been working toward. As if going to Notre Dame and trying to pull off an upset was going to be hard enough, now they have Eli mush all over them. Plus Notre Dame is coming off a loss to Syracuse and they’re too good to lose 2 in a row. So between Notre Dame needing a bounce back and Eli mushing the Blue Devils to hell, give me the Irish in this one.

Okay so a lot of what I said there was wrong. About the time zones and about where the game is at. Thanks to friend of the program Ryder Garnsey for pointing that out. But I’ll stand by the rest of that take so still give me the Irish coming out on top.

That’s two straight 5-goal losses for Ohio State after they came out of beat the balls off of Denver the other week. 12-7 loss to Notre Dame, at Notre Dame. And a 9-4 loss to Penn State, at Penn State. They’re back at home this week and Hopkins has been one of the more inconsistent teams of the season. They went 4-0 to start the season, then had 3 straight losses and now have won their last 2. I honestly have no idea how to gauge the Blue Jays. Some days they can be a legitimate contender, some days they look like somebody replaced their sticks with buckets full of shit. While I never hopped on the Ohio State bandwagon, I do think they are too good to lose 3 in a row. I think the Ohio State shooters will be too much for the Hopkins D to handle. As soon as Ohio State gets in to double digits, it’s over. I can’t see them giving up more than 9 to a Hopkins offense that has looked lost on the road a couple of times already this season.

I know I talked a bunch of shit on North Carolina earlier but the way this season has been going, they win on Sunday and continue to make a mess out of everything. A win keeps them in the top 20 and keeps them in the discussion for a team who could sneak into the tournament based on RPI even though they don’t deserve to be anywhere near the tournament. All of their losses have been at home this year and their only top 20 win came against Denver at Denver. They’ve only had 2 away games all year plus they opened up the season at a neutral site. So their 3 games away from campus they are 3-0. Their student section must fucking blow. Anyway, it’ll be good for them to get away from campus and now that everybody is counting them out, it’s a perfect time to get a win to make everybody look like idiots. Give me Carolina outright.

Yeah, I know this is a top 20 match up but not really. Nova got a gutsy win over Maryland and has followed that up with wins over Bucknell, Fairfield and an overtime win against Marquette. The Maryland win was nice. The rest are whatever. They aren’t a top 20 team but the season has just been so wild that they managed to find themselves in there. Denver by a lot.

Army over BU. Army is the best team that not a lot of people are talking about (including myself). Albany over UMBC. Princeton over Stony Brook. And let’s get crazy and just say Michigan over Rutgers. Like I’ve said before, Rutgers was a fake good team and Delaware broke them.

Last week’s picks were Richmond +2 against Virginia, they covered but lost 8-7. Penn State +1 against Ohio State, they won 9-4. against Syracuse, they lost 11-10. And  against Bucknell, they won but didn’t cover 11-10. Good week for the dogs last week, rough one for the favorites. It happens. For this week we have…

– The Year of the Goalie Goal continues. This time it’s Utah getting into the mix.

– Here’s a good article on the NCAA looking to ban early recruiting in college lacrosse. Something that is long overdue.

– I’ll be up on Long Island this weekend for training camp with the New York Lizards. There will be plenty of content coming from that trip if you’re into that sort of thing.