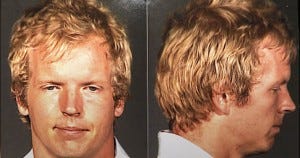 Chris Simms on his podcast, describing how CBS kicked his father’s dick into the dirt:

“I had to tell my dad first before CBS or anybody. Because I found out (by text) from an NFL insider. … I forwarded the text message that I was sent. It basically said, ‘Hey, listen, sorry to be the bearer of bad news, but Romo’s being offered your dad’s job on CBS. That sucks. I’m sorry.’ My dad was in Barbados. And I had to forward the text message to him to let him know.” …

“Listen, certainly a company like CBS is going to run this by Jim Nantz. If I’m going to sit here and be honest with you, yeah, that’s what I would envision happening. Jim Nantz is their guy. ‘Hello, friends.’ He’s kind of the face and voice of the network. He’s a bigger linchpin than Phil Simms for that network, that’s for sure. So I would think in some degree or fashion, I’m not trying to throw Jim under the bus, (but) yeah, he signed off on this to some degree.”

Wow. That is some underhanded, diabolical shit right there. Who knew Jim Nantz was this cold blooded? He’s the kind of guy that can cut the throat of his partner for 20 years without his heart going above 40 beats per minute, then go home and sleep like a baby. He probably debated having someone from the network tell Simms “The Nantzes send their regards” as they put the knife in. But then ultimately decided letting Simms find out through his kid or from the media was even crueler so he went with that.

Not that you can blame him. After Simms pulled that fart stunt:

… what else can a powerful man like Jim Nantz do? He has to respond with merciless cruelty or it’ll be perceived as weakness. Then he’ll end up with Bill Raftery and Grant Hill will think they can just waft farts on him. Next it’s Nick Faldo and Ian Baker-Finch. And before you know it, Nantz stops being the top of the broadcaster food chain and becomes the laughing stock everyone waves their gas at. So Simms had to be made an example of. In the swiftest, cruelest way possible to deliver the message “You don’t fart in Jim Nantz’ face, he farts in yours. And you’d better act like it’s sweet ambrosia or he will kill you where you stand.” Message received. And Chris Simms better keep his goddamned head on a swivel too if he knows what good for him.