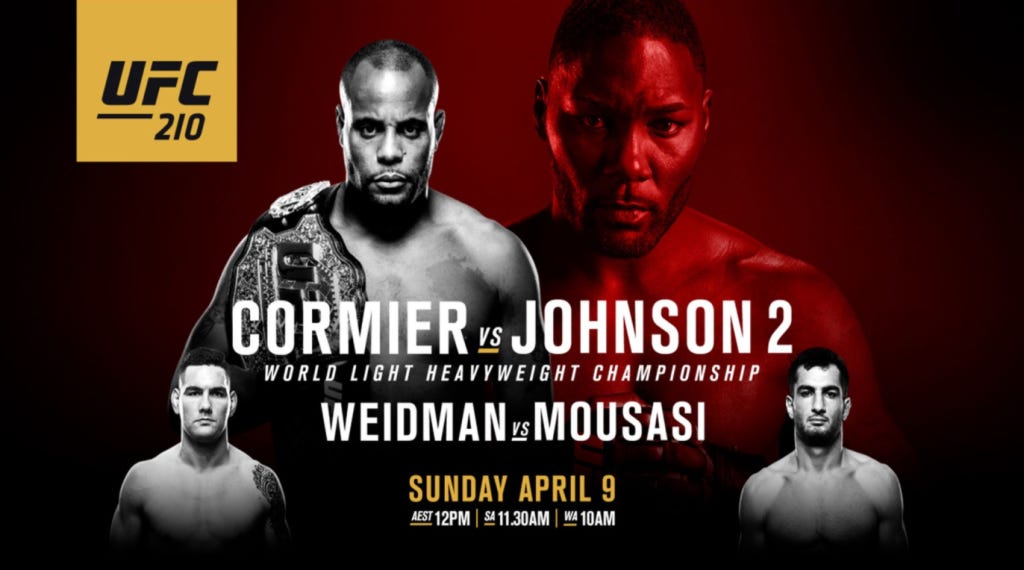 The UFC is back in full swing starting with UFC 210 in Buffalo, after having their yearly dull period. It’s been a while.

The card in Buffalo has been getting some flack, and while it’s no 205, it’s looking pretty damn good. A Light Heavyweight Championship main event, an All-American in the co-main, and a former opponent of mine, all in one night, sounds fine to me. Here’s your UFC 210 breakdown:

This is the hardest fight on the card to predict. We’ve seen it once already, and I want to guarantee it’ll go the exact same way, but with Anthony “Rumble” Johnson, you can’t guarantee shit. The man has the heaviest hands in the sports, and may be the most dangerous man in the world. We’ve seen it time and time again, one punch can end any fight at any time. I think he has the best chance out of any Light Heavyweight to beat Jon Jones because of that. That is unfortunately his only path to victory, however.

Daniel Cormier on the other hand is one of the best wrestlers on the roster, knows how to defeat Johnson inside the octagon, and has multiple paths to retaining his championship. When DC grinded Rumble out and grapplefucked him on the ground, he was spent. Toast. Donezo. Cormier saw a lot of success with this approach last time, and although he SWEARS he plans to stand and trade blows with Rumble, he doesn’t. There’s a zero percent chance. That’s pro wrestling DC coming out of the woodwork, trying to sell a fight he thinks he’s already won. It’s smart, and he may manufacture a “heel turn” if the crowd boos him after churning out a decision victory. I would too after UFC 200. He’s my reluctant pick here, because he’s not the fun one to cheer for, he isn’t the crazy flash-KO guy, but after everything that happened in July, he’s made me a fan for life and I think having more than one route to a win will play in his favor.

Jon Jones will be in Buffalo, and there’s a lot of speculation we’ll see some sort of interaction between him and the winner. It’ll be interesting.

This fight. This fucking fight. It’s gotta be the fight of the night. Mousasi wanted Weidman for a while now, and he’s got him. Be careful what you wish for though. The All-American is hungry for a W after dropping two in a row to Luke Rockhold and Yoel Romero.

Yoel’s knockout of Weidman was brutal. So brutal, if could be one of those where the fighter doesn’t come back the same man.

I’m hoping this isn’t the case, and we see The Chris at his best, because he’s one of my favorite fighters. May put him in my Top 5 All-Time for him knockout of Anderson Silva alone. Probably my favorite moment in MMA history.

Gegard Mousasi is experienced as fuck, and has fought professionally over 50 times (including kickboxing). His pressure is outstanding and he’s able to pick opponents apart and interrupt their combinations with his technical ability. That’s what he’s going to need to institute against Weidman.

I’m still giving Chris the edge, mostly due to his sick wrestling and jiu jitsu, part because I’m a fanboy. U-S-A! U-S-A! U-S-A!

This will be the second UFC pay per view in a row for Calvillo, who was a last minute replacement opponent for Amanda Cooper. She’s 4-0 professionally, and her opponent Pearl Gonzalez is 6-1. I’m not sure why this is on the main card, especially right before the main/co-main combo.

I predict this will be a pretty boring jiu jitsu fight, as both like to stay close to the ground. Picking Calvillo for no reason other than her looking really good against Amanda Cooper. Sorry guys!

UPDATE: I’m at the Natty Shack in Augusta, and have been informed this fight is cancelled due to Gonzalez having implants. Apparently fighters in NY are not allowed to have implants. Maybe ending her career. We hardly knew ya.

The battle of UFC veterans. Love it. This will be a banger, an all out brawl between muay thai (Alves) and boxing/wrestling (Cote). Cote’s going to have a huge size advantage, as he used to fight at Light Heavyweight and Middleweight, and Alves was training for a Lightweight fight for a while now. I’d say the size difference along with Cote’s recent wrestling ability should give him the clear advantage, and he’s my pick.

I’ve been a fan of “Ill” Will Brooks for a long time. Since before he even won the Bellator Championship. So it pains me to say I just haven’t been impressed in the least by Ill Will’s UFC performances. I think this is the fight he can turn it all around, and there’s even a chance the UFC designed it that way. I think Brooks is a bad matchup for Oliveira, for almost entirely the reason of Fight IQ. Brooks is a very smart fighter in the cage. Oliveira’s kind of a reckless baffoon. I predict this fight will be ended by a Will Brooks submission early on.

Katlyn Chookagian is coming off a fantastic head-kick knockout over upcoming prospect Robbie “Octagon Bob” Fox, and that had to be a huge confidence booster.

She displayed fantastic jiu jitsu in that fight, tapping her opponent a record 19 times in one fight. That was obviously a huge improvement over her previous fight, a split decision loss against Liz Carmouche, and I think the fact that she’s able to display such advancements and changes is enough for me to select her in this fight.